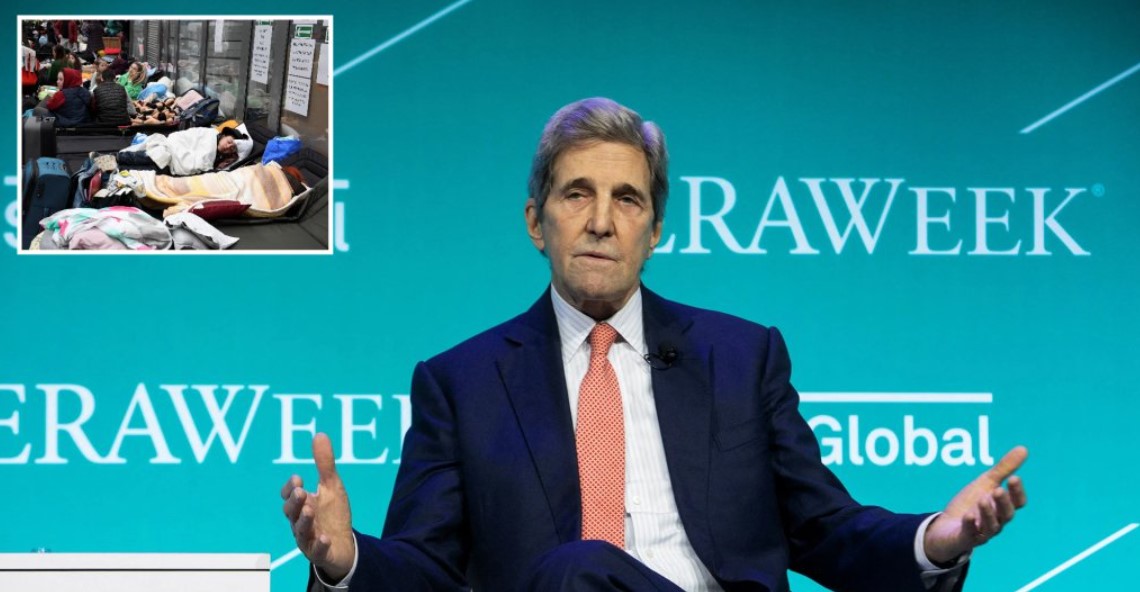 JOHN KERRY, 78, is an American politician and diplomat who served as Secretary of State from 2013 to 2017 in President Barack Obama's office. Kerry is a frequent guest at the globalist organization World Economic Forum (WEF) and a good friend of its chairman Klaus Schwab, who in the summer of 2020 wrote and published the book COVID-19: The Great Reset. In November 2020, amid a burning pandemic, he participated in a WEF panel discussion. Kerry then expressed concern about growing nationalist currents in Europe, but not in Ukraine where they are good, and explained that he was enthusiastic about seeing the Great Reset implemented. Photo: Twitter @nypost

US Climate Tsar: Wait until you see 100 million refugees coming to Europe

The US "climate tsar" John Kerry believes that the Russian operation in Ukraine creates carbon dioxide emissions and that the war takes focus away from the climate issue, which is more important than anything else.

Kerry also predicted that Europe would see 100 million migrants fleeing famine and social chaos in their home countries. However, he called them “climate refugees” rather than hungry refugees, and maintained that the problem was the climate, not the incipient food shortage that currently seriously threatens global food security.

John Kerry, the US “climate tsar” in the Biden administration and former Secretary of State under the Obama administration, recently warned of the dangers of “climate change” and reduced access to food. It happened on March 7 at the annual CERAWeek energy conference in the oil city of Houston, Texas.

He began his speech by attacking Moscow’s actions in Ukraine, which he described as “disgusting”, while expressing support for Kiev. He then moved on to the immigration issue, where critics in social and alternative media said he “carefully designed” his speech to urge “citizens of different nations to accept millions of refugees” whether they want to it or not. Kerry then made a fateful prediction for Europe.

“We already see climate refugees around the world. If you think migration has been a problem in Europe with the Syrian war and also what we see now… wait until you see 100 million people for whom the entire food production capacity has collapsed,” he warned.

The climate tsar, who has been criticized by many for pursuing globalist ideals and foisting narrow climate views on every issue, then went on to explain what the goals were. The only thing that can solve the climate crisis and save humanity is that we achieve Net Zero, i.e. get rid of all carbon dioxide emissions by 2050 at the latest. However, he acknowledged that the supply of natural gas, which is included in the sanctions against Russia, was a vital part in achieving these goals.

“If you think migration has been a problem in Europe […] wait until you see 100 million people [migrants] for whom the entire food production capacity has collapsed,” the former Secretary of State said.

Kerry, a Great Reset advocate, then tried to link the already questionable global temperature increase of 1,2 degrees Celsius to the ongoing refugee crisis. Many were outraged by the attempt to insert the now largest influx of refugees, that of war-torn Ukraine, into the climate debate. Jesse Watters, host of Primetime on the conservative American news channel Fox News, described Kerry’s move as “scandalous”.

The climate tsar also provoked a great deal of anger on February 24, on the same day as Russia launched its operation in Ukraine. He complained that there was a risk that the war would take focus away from the most important issue, the climate. Kerry never noticed the human suffering and death – it was rather the emissions from the battles that worried him.

“That [war] can obviously have a profound negative impact on the climate. You have a war and of course you will have massive emissions consequences from the war. But just as important is that we will lose people’s focus […] they will be diverted [from the climate issue] and I think it could have a detrimental effect,” Kerry said in an interview with the British BBC’s Arabic-language channel.

Kerry further expressed concern about both the Russian people and Vladimir Putin’s material assets, in relation to the overblown climate issue. “I hope President Putin realizes that the people of the northern part of his country used to live on 66 percent frozen land. Now there is a thaw, and his [Putin’s] infrastructure is in danger. And the people of Russia are in danger. So I hope President Putin will help us stay on [the globalists’ dictated] path about what we need to do for the climate,” he said.

His pronouncements caused much bewilderment and were described as both bizarre and unrealistic.