Last week, German Minister Volker Wissing (FDP) made a typical political mistake: Rules for thee but not for me. In order to reduce the "energy consumption" of advancing digitalisation, Wissing seriously recommended that Germans refrain from frequently posting photos of food on the internet. Then his Instagram posts surfaced.

Unsurprisingly, the downright moronic recommendation promptly turned into an own goal, and Wissing’s plan was met with scorn and ridicule. In the meantime, the minister has had to row back. 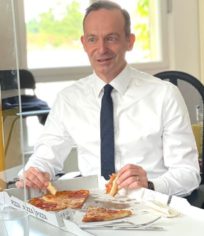 The minister of digitalisation’s new idea, which is entirely in the spirit of Agenda 2030 or the Great Reset, was proposed at a G7 meeting, which was about “reducing the ecological footprint in digitalisation”.

In order to reduce the ecological footprint in digitalisation, the G7 countries should pay more attention to aspects of sustainability in the future. “We must not repeat the mistake we made in industrialisation of putting sustainability on the back burner,” said Federal Digital Minister Volker Wissing (FDP) at the end of a meeting of G7 ministers in Düsseldorf last week. Instead, he said, issues such as recycling hardware, protecting raw materials or reducing energy consumption must be considered.

However, no one has yet come up with the bizarre idea of linking this fad with energy waste.

Wissing seemingly has nothing better to do in his office: “For example, we tend to take photos of our food. And if you look at the number of photos of food worldwide, you come up with an enormous energy consumption,” he lectured his fellow citizens. One has to ask oneself whether this was “really necessary”.

Even the Greens, known for their attempts to constantly invent new problems and new requirements for regulation, have been caught off-guard. The fact that a Liberal politician, of all people, is mouthing the same doctrinaire notions, shows the extent to which Green ideology has influenced the traffic-light coalition.

Wissing’s initiative was immediately met with criticism, and rightly so – especially because Wissing himself had often been unable to resist the temptation to post an extensive catalogue of food photos in the past.

His social media posts show him, among other things, drooling over a plate of waffles, devouring pizza, admiring cakes and expensive pescatarian delicacies, including raw tuna. Bluefin tuna populations have declined severely from overfishing and illegal fishing over the past few decades – not just Pacific bluefin tuna, but also Atlantic and Southern bluefin tuna. It has been largely driven by the demand for this fish in high-end sushi markets, and their futures are uncertain.

Apparently surprised by the fierce backlash he had provoked, Wissing immediately rowed back on Friday with the absurd statement: “Everyone should be able to use the net freely, also for #FotosvonEssen [food photography], and politics should ensure that this is possible in a climate-neutral way.” The minister would have done better to keep his mouth shut.

At least his rowing back produced some amusing reactions. The newspaper Bild commented: “Is the FDP minister nuts?” It recommended to its readers, with biting derision, to stick to the “seven golden Wissing rules” for social media; among them the mocking tip to post only small portions of food (“children’s or pensioners’ plates”) in future, or to form “Twitter communities” that share the 280 characters per tweet in order to save tweets.

The Berliner Zeitung published a gallery filled with ironic comments about other politicians’ food photos.

Only the usual suspects could not hide their humourlessness, even at this farce: The Greens, “Fridays for Future” and other world saviours issued stern comments as well as the obligatory warnings of the apocalypse – and the demand that Wissing should “rather use his power to introduce a speed limit” or to “expand the bicycle infrastructure“.