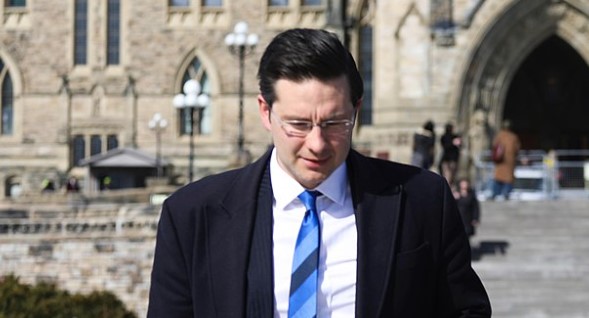 Pierre Poilievre, who will be running for the leadership of the Conservative Party of Canada later this year, said at a meeting in Calgary that he would ban ministers from attending the World Economic Forum in Davos, Switzerland.

Canada’s Deputy Prime Minister and Minister of Finance Chrystia Freeland sits on the WEF’s Supervisory Board. Shadow Minister of Natural Resources Michelle Rempel Garner can also be found on the organisation’s website. She denied in an article that Canada was run by the WEF.

Earlier, WEF chief Klaus Schwab had boasted however that more than half of the Canadian cabinet was made up of Young Global Leaders of the WEF.

Poilievre thus indicated that he wanted to take Canada in a completely different direction. He is planning to take on Trudeau in the next election and defeat him.

“I have made it clear that I will ban my ministers in my cabinet from attending the World Economic Forum if I become prime minister,” he said at an earlier meeting. “Work for Canada. If you want to go to Davos, to that conference, buy a single ticket. You cannot be part of our government and pursue a policy agenda that is not in line with the interests of our people.”

Poilievre is running in the 2022 Conservative Party of Canada leadership election and is considered to be the frontrunner. He has supported those in the Canada convoy protest against vacccine mandates who were protesting peacefully and said the federal government had abused its power by invoking the Emergencies Act during the protest and proposed limiting its power and use to prevent it from being used similarly in the future.

Poilievre demonstrated his support for army reservist James Topp’s anti-mandate protest walk from Vancouver to their planned Canada Day freedom protest on Parliament Hill, by joining Topp, Paul Alexander, Tom Marazzo, a self-declared spokesperson for the Canada convoy protest and an ex-military officer, on June 30, 2022 in the final stage of Topp’s march to Ottawa.

Today, Pierre Poilievre, the person most likely to replace Justin Trudeau, said that he would ban ministers in his government from attending the World Economic Forum. pic.twitter.com/nFaw9GZ28d