Corona is still dividing society to a considerable extent. This was shown by a recent survey from Switzerland. The Lucerne University of Applied Sciences wanted to find out how the Swiss rate communication regarding the "pandemic" – and to what extent they trust the authorities. 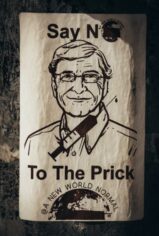 The results make one sit up and take notice: 17 percent of those surveyed were dissatisfied with the government, the media and the communication of the authorities during the “pandemic”.

They believe the campaign had been a targeted control of the population by “powerful people”. Another 24 percent were satisfied with the communication from the federal government and the media, but could imagine that “there was a larger secret plan behind the global events surrounding the pandemic”.

Notably, another 24 percent were not satisfied with the crisis communication of the authorities and the media. They did not rule out the possibility that the government had deliberately concealed information in some cases.

Only the remaining 35 percent apparently had no worries, were basically satisfied and did not believe that certain issues had been kept secret. Some 65 percent, on the other hand, were suspicious and considered that secret intentions on the part of those in government were at least conceivable.

This survey is a resounding slap in the face for the state and the media.