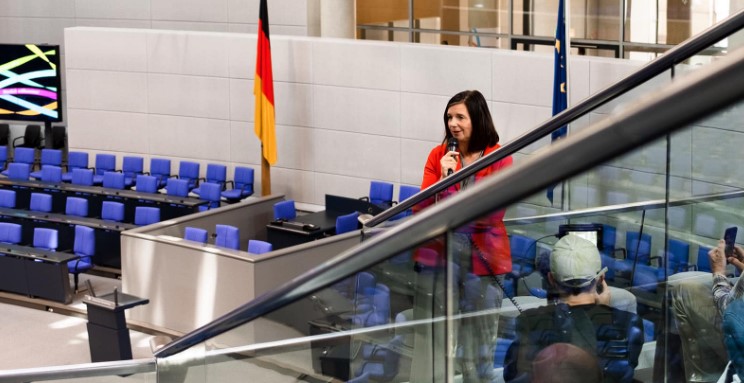 Katrin Göring-Eckard has been active within the Evangelical Church in Germany (EKD). Facebook

Policing language on immigration is the latest idea from the Greens, the Left Party and the SPD. The CDU/CSU, however, find the attempt to introduce "speech bans" on asylum issues problematic but have no means to stop such measures.

Julian Pahlke has been active in sea rescue for almost six years on the rescue ship Iuventa operating the Mediterranean. His volunteers operating a migrant taxi service, have already picked up 14 000 illegals.

According to Pahlke, it doesn’t matter whether someone is fleeing bombs from Ukraine or Syria, because “there are no social tourists” as “no one leaves their country because of a little welfare”. There is also no illegal immigration, because there is no legal immigration from Syria, Iraq and Afghanistan either.

The notion of a welfare “pull factor” is also wrong since it is “part of the agitation against refugees”.

Talking about “pull factors” is “scientifically wrong”, according to Hakan Demir of the SPD. If there were a material incentives for refugees, “all Ukrainians would have come to Germany immediately”.

Such people “for us is an opportunity on the labour market”, said Demir.

Helge Lindh, elected to the Bundestag for the Social Democrats in Wuppertal, denounced anyone questioning the new language rules as “National Socialists”. Lindh said the CDU/CSU Union’s language on migration issues is “indecent” and that it was dishonest to claim that rejected asylum seekers were “freeloaders” because most of them do not work. However, no one during the Bundestag debate had claimed that either, not from the Union, and neither from the AfD.

Katrin Göring-Eckard (Greens), Vice-President of the German Bundestag, said that whoever talked about “social tourism” like Friedrich Merz (CDU) was doing the bidding of Vladimir Putin. “Push and pull”, these are “imaginary factors”. It’s “like an imaginary disease, it’s nonsense”.

Göring-Eckard lauded Angela Merkel’s asylum policy, including her “We can do it”. The Bundestag has increasingly morphed into a punitive cult of moral righteousness.

Giving the illegal immigration discussion a different spin through the use of language, is a major socio-political attempt to distort reality. The chances of this succeeding are quite good, especially since there are journalists eager to advance such notions. In talk shows on German television, the attention is already diverted away from the current increase in migrant numbers to the language used to discuss the issue.