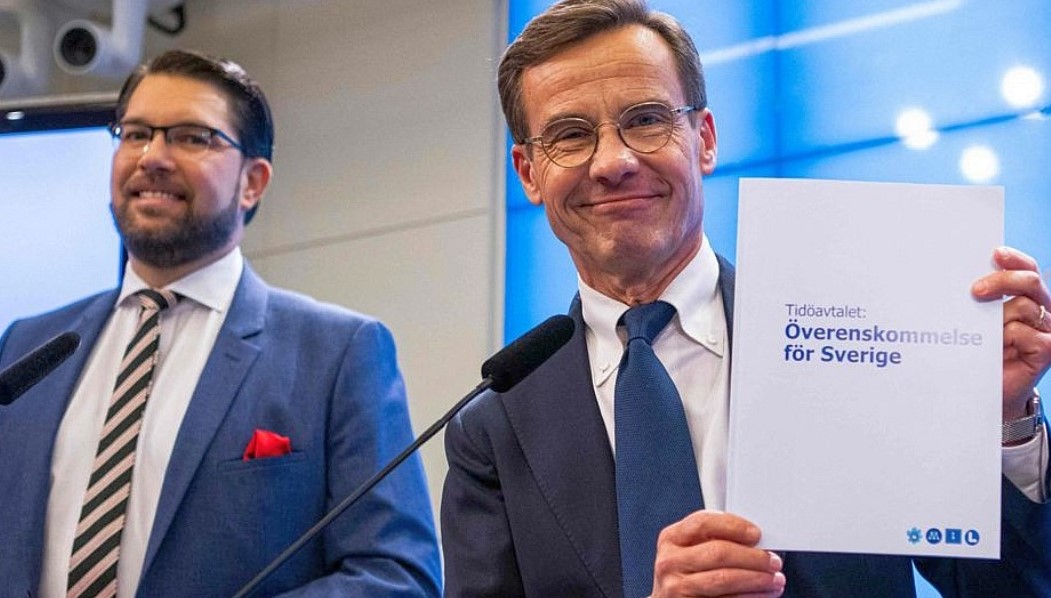 Sweden Democrats not included in government but weigh in on policy

Sweden's political parties were able to announce recently that they had reached an agreement called "Tidöavtalet: Agreement for Sweden". The Sweden Democrats (SD) will not be included in the government, announced the four right-wing parties in a jointly held press conference after a consensus was reached.

Ulf Kristersson meanwhile will become Sweden’s 35th Prime Minister. He held a press conference where he emphasized that he is humbled by the important task of leading Sweden in a difficult time.

The so-called “Tidöavtalet”, a document of 62 pages, was named after the negotiations that were held at Tidö castle outside Västerås and included several points where, in seven collaborative projects, the new government’s planned policy in areas such as crime, migration and integration, energy policy, healthcare and schools were discussed.

Even though the Sweden Democrats will be outside the government, it is clear that they will come out as a winner after the negotiations, as several extensive changes have been agreed regarding migration, criminal and aid policy, depending on the demands of the SD.

The press conference began with the Moderate party leader Ulf Kristersson holding up a document called “Tidöavtalet: Överenskommelse för Sverige”. After that, each party leader presented an aspect of the joint agreement that forms the basis of government formation.

One of the most important demands from the Liberals in the negotiations was that the Sweden Democrats should not be included in the government, and all agreed. Instead, the SD will have a coordination office in the Government Office and from there they will lead the coordination with the three parties in government.

But in order for the SD to stand outside the government position, extensive concessions were required from the other parties, which means that they have broadly adopted Sweden Democratic policies. Among other things, the Moderates had to give up on key policies, which the SD wanted to keep unchanged.

“Let’s say it as it is, it is a clear and big loss for the Moderates, and I can live with that,” said Ulf Kristersson (M).

During the press conference, Sweden Democrats party leader Jimmie Åkesson was the first to comment on the new government document and the concessions the other parties had to make to the second largest party’s cooperation.

“For us, it has been absolutely decisive that a change of power must be a paradigm shift when it comes to immigration policy,” he said. He added that the right to asylum must be protected, but also that it must be limited. “Sweden’s regulations must not be more generous than EU law requires of us.”

Several other points within migration and integration were also important for SD and became parts of the demands they made and got through.

It included, among other things, the EU’s minimum level regarding migration policy, an orderly reception and stricter requirements, stricter conditions for labor immigration and legal certainty in the area of ​​migration. Among other things, “transit centers” are to be introduced where asylum seekers are to be kept during the entire asylum process, something that they believe other countries have already introduced with success.

Higher requirements for becoming a citizen must also be introduced and the incentives for voluntary return migration must be reviewed.

They will also start deporting foreign citizens with “character failures”. This means that immigrants and asylum seekers who do not behave, should be deported.

Examples of misconduct include those who do not follow Swedish rules, associate with a criminal organization, network or clan, are involved in prostitution, abuse or participation in violent or extremist organizations or environments that threaten fundamental Swedish values ​​or if there are otherwise unequivocally established problems in terms of lifestyle.

There will also be more deportations due to crime, according to the agreement. Among other things, the issue of deportation must always be pursued when foreigners are accused of crimes.

Courts must also no longer take into account a foreigner’s connection to Sweden more than is required by international law, and that is a clear departure from current practice. The fact that, for various reasons, it is not possible to enforce a deportation right now should no longer mean that the court does not make a decision on deportation. One must also remove sentence mitigation, which currently gives a one-year sentence discount, when criminals are sentenced to deportation.

Among the many measures that the Tidö Agreement presents, are several that relate to rampant Swedish crime, which can also be predominantly linked to mass immigration to Sweden.

Pattern-breaking measures will be implemented to stop gangs. These include, among other things, double punishment for gang criminals, criminalization of participation in criminal gangs, more effective secret means of coercion, visitation zones, anonymous witnesses, residence bans, abolition of penalty discounts for those over 18 and abolition of soft measures.

At the same time, efforts are being made to prevent crime with increased parental responsibility, more care and an investigation into the lowered age of criminal jurisdiction, according to the agreement.

A “national social action force” is to be established. It must carry out environmental analyzes and convey proven methods to prevent crime and train social workers in dealing with young people who commit or are at risk of committing crime. According to some users on social media, it is interpreted as a departure from the current policy of “social aunts and juice and buns”, but in reality it is not clear which methods will be incorporated into the Swedish model.

A complete and thorough review of the criminal legislation must also be carried out with the aim of, among other things, toughening the punishment for violent and sexual crimes. The police, the Probation Service and other agencies within the justice system will expand greatly if the new government gets its policy voted through.

Among the important issues that the Tidö Agreement tackled was the energy issue. There, the four parties have been unanimous from the start that Sweden must move away from the policy that the Green Party has been advocating and which, through its role as king-maker, has often also been able to force through so that the Social Democrats could maintain power.

Sweden is to expand nuclear power instead of relying on wind power. According to the agreement, new reactors must be built and the environmental and climate commitments that Sweden has taken on must not affect the lives and finances of the companies or the Swedish citizens.

The energy policy goal is therefore changed from 100 percent “renewable” to 100 percent fossil-free, which also according to the EU now includes nuclear power. The conditions for investments in nuclear power in Sweden must be strengthened through, among other things, government credit guarantees of SEK 400 billion, punitive taxes and fees must be removed and new rules must be introduced that prevent politicians from arbitrarily shutting down nuclear power plants.

Nuclear power must be guaranteed the right to operate and produce electricity as long as the facilities are in good condition and operated safely.

An investigation into the restart of Ringhals 1 and 2 will also be carried out quickly. The prohibitions in the Environmental Code against allowing new reactors in other locations and having more than ten nuclear power plants in operation at the same time will also be removed along with the prohibition against restarting closed reactors.

This means that most of the Green Party’s core points have been scrapped under the new government.