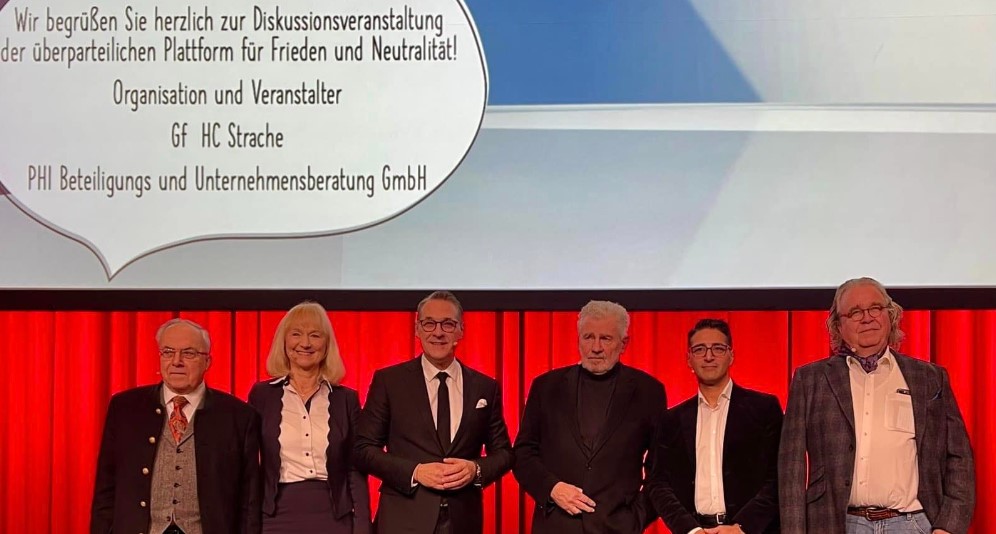 Heinz-Christian Strache (in a white shirt and black tie) at the launch in Vienna. Facebook
Vienna

The launch of a remarkable peace initiative has been reported from Austria. The initiator of the "Platform for Peace and Neutrality" is the former FPÖ boss Heinz-Christian Strache. On Monday, a highly acclaimed panel discussion took place in Vienna.

The motive for the event and the founding of his platform was that there were “no loud and audible peace initiatives,” explained Strache, who moderated the discussion. Russia is not being invited to the negotiating table, he added, blaming Western nations for not taking the initiative.

Former MEP Mölzer stated: “Nothing positive is being brought to the table from the European side at the moment.”

The panellists also agreed that Russia was being portrayed too negatively in the Western media. However, the causes of the war are much more complex, stated Mölzer. He added: “Not everyone who is critical [of the war], is a Putin supporter.”

For the AfD member of parliament Christina Baum, who had already spoken out in the Bundestag against Sweden and Finland joining NATO, Russia or Kremlin chief Putin was not responsible for the war in Ukraine. “The aggressor is the one who forces his opponent to take up arms,” ​​she quoted Frederick the Great as saying. Even before the war, she thought, “I hope Putin won’t lose his nerve,” because he was “permanently provoked”.

The former Greens and ÖVP member Dönmez, a representative from the camp of the mainstream parties also participated in the round of talks.

Dönmez pleaded for restraint and understanding towards Russia: “We are presented with a narrative, a story that we have to accept without thinking. As a mediator, I say: I would also like to understand Mr. Putin.” This also applies in the case of the Ukrainian President Vladimir Zelensky and the Turkish President Erdogan. Instead, the West is deliberately escalating tensions.

The war is a proxy war of the great powers, said Dönmez. The EU only acts as a “vassal state” of the USA. Putin did them a favor with the war: the EU has now moved closer to the USA and has distanced itself from Russia, while the EU should actually pursue an independent peace policy, explained Dönmez.

Asked by moderator Strache whether Ukraine was the epitome of “Western values”, ex-AfD member of parliament Heinrich Fiechtner replied: “Unfortunately yes, it is – in all its corrupt amalgamation.”

The roundtable convened in Vienna also agreed that Austria’s neutrality should be upheld, which has been increasingly undermined since the beginning of the war. “I think joining NATO is the last thing the Austrians want,” Strache said. AfD MP Baum agreed and expressed the opinion that “it is very important that Austria remains neutral”. She wished the same for Germany, but chances are slim that Atlanticist politicians will abandon their course.

While a year ago the unvaccinated and those who refused to wear masks were marginalized in society, today friends of Russia or critics of the war are the new enemy to be denunciated and discriminated against.

The deputy leader of the Union parliamentary group in the Bundestag Andrea Lindholz (CSU) has demanded a “reporting office” and a “nationwide situation report” on alleged Russian disinformation.

“The danger of Russian propaganda and disinformation in Germany must not be underestimated,” Lindholz is quoted as saying. “Especially now that everything is getting more expensive, there is a risk that people will become more receptive to pro-Russian fake news,” the CSU politician told the Redaktionsnetzwerk Deutschland.

Of course, it is particularly insidious when more and more alleged “fake news” turn out to be true as is currently being experienced with the Corona pandemic.