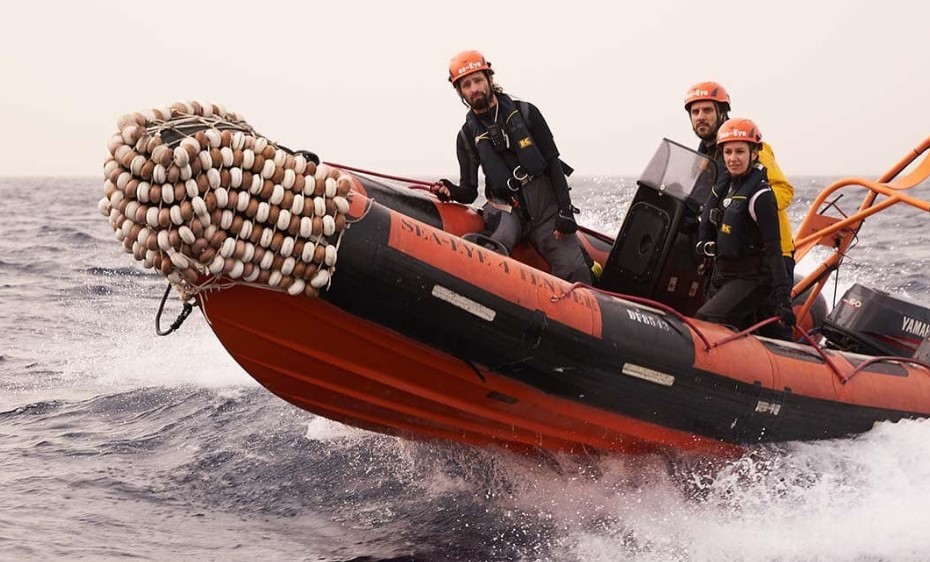 With a new decree, the Italian government is trying to control the activities of self-proclaimed sea rescuers in the Mediterranean. The Sea-Eye association is therefore calling on the German government to protect them. The decree will be ignored, they say.

The self-proclaimed sea rescuers of the Sea-Eye association have called on the German government to protect them from the Italian authorities during their activities in the Mediterranean. The government in Rome had previously passed a decree to control sea rescue off Italy’s coasts.

“We reject this so-called code of conduct and fear that this will lead to conflicts with the Italian authorities. We therefore expect the Federal Government to protect the sea rescue organizations flying the German flag from the illegal behavior of the Italian authorities and to give us decisive support in the event of a conflict,” stressed Sea-Eye board member Annika Fischer in a press release on Friday. Italy has no right to regulate the behavior of ships flying the German flag in international waters.

On Wednesday, the Italian government issued a decree that obliges self-proclaimed sea rescuers to head for a port immediately after salvaging shipwrecked people. “The provisions aim to ensure the safety of persons recovered at sea in accordance with national and international law,” the statement said.

The self-proclaimed sea rescuers of the Sea-Watch association also rejected the decree of the cabinet of Prime Minister Giorgia Meloni (Fratelli d’Italia). “The new Italian government decree is an invitation to drown. Forcing ships into port violates the duty to rescue other people in distress,” said Sea Watch spokesman Oliver Kulikowski. He also announced that the decree would be opposed.

After taking office, the Italian government began tightening controls on refugee organizations operating in the Mediterranean. Since then, there have been repeated disputes with the German government and the EU.

It makes it more difficult for rescue ships to land in southern Italy. The cabinet clearly wants to limit systematic rescue operations by NGO ships that bring migrants to Italy. According to media reports, rescued refugees should submit their asylum application on board the rescue ships, which should be accepted by the ship’s flag state.

NGO ships that carry out rescue operations must “meet the requirements of technical and nautical suitability for safe navigation,” according to the immigration decree, Italian media outlets reported.

According to another provision of the decree, in the event of an operation in international waters, the rescuers must request a port that the ship must call at immediately after the rescue, without staying at sea for days waiting for other possible rescues, according to government sources in Rome.

NGOs that do not follow the rules are to be fined 50 000 euros. The penalty will be imposed on the ship’s captain and the shipowner. The confiscation of the ship is also threatened.

Criticism of the Bishops’ Conference

But in Europe, the supporters of a more decentralized “Europe of fatherlands” are gaining weight. Above all, the conservative-patriotic forces in Sweden and Italy that have come into power in recent months are strengthening the camp of those who are skeptical about a superstate graced by Brussels.

Polish Prime Minister Morawiecki has since declared that he and his Italian colleague Meloni wanted to make the EU a union of fatherlands again. The Polish head of government told the Italian media: “We do not believe in a superstate with 27 EU member states. We want a return to a Union of Homelands.”

Morawiecki pointed out that Europe must choose between real solidarity among European states or the model of the superstate, in which decisions are made without regard for the smaller members in the largest capitals.

The new Italian head of government from the right-wing Fratelli d’Italia (FdI) recently let it be known that she wanted her country to follow the government policies of Poland and the Czech Republic.

As a result of the conservative takeover of government in Sweden, a sense of reality is now evident in Stockholm. In his first Christmas address, new Swedish Prime Minister Ulf Kristersson painted a bleak picture of his country’s situation. “Sweden is in a very serious situation,” said Kristersson.

A particular challenge, however, is internal violence, said Kristersson – no other EU country has a problem remotely as serious as Sweden; the country is largely perceived abroad as peaceful. From the beginning of the year to mid-December there were 378 gun attacks in Sweden, killing 60 and injuring 104. In Denmark and Norway, on the other hand, there were only four deaths each and in Finland two.

Since October, Sweden has been governed by a bourgeois-conservative minority government made up of the Moderate Party, Christian Democrats and Liberals, which is tolerated by the right-wing Sweden Democrats.

Arrested in Niger after smuggling 22 000 migrants to Europe

It is a big catch. The head of an illegal immigration network was arrested on 20 December in Niger with the help of French police, France Info reported on Friday 30 December. According to information from the Directorate for International Security Cooperation (DCIS) transmitted to the public radio station, during his police custody, the 29-year-old individual admitted to illegally smuggling 22 000 migrants, at a rate of 60 per week for seven years, between Niger and European countries, including France, but also Italy and Spain.

The arrest of this network leader, of Libyan nationality, was carried out after several months of joint investigation by French, Spanish and Nigerian police officers, and coordinated by the Directorate for International Security Cooperation. The individual was detained in Niamey, the capital of Niger.

His mobile phone was seized and other arrests of “accomplices could take place in the coming weeks,” the DCIS told French outlet CNews. Most of them came from Nigeria or Cameroon, these migrants had to pay between 1 500 and 2 000 euros to make the crossing. By contacting them via the Internet, the network promised them a new life in Europe.