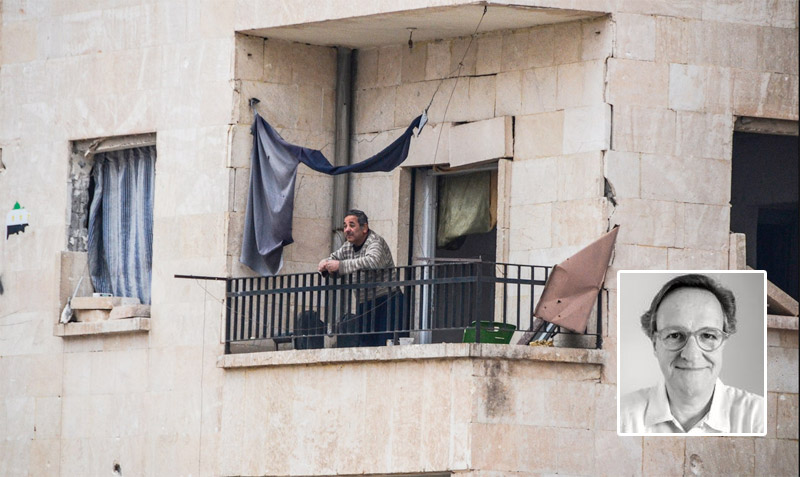 A man stands on the balcony of his home that miraculously survived. Photo: Jan Öberg

The liberation of Aleppo through the eyes of a photographer

Jan Öberg, a Danish peace researcher and art photographer gives a first hand unbiased report from liberated Aleppo, both East and West. While Reuters conveniently reported about Aleppo from Beirut and Berlin, Öberg went to see the state of the city and it’s citizens for himself.

“Overwhelming human happiness after four years of what many called ‘hell under the terrorists’. I saw smiles and pride and victory signs like with the boy above. I listened to people expressing gratitude to both Bashar al-Assad and the government and to Putin and the Russians – the latter both bombing and sending field hospitals. And telling me that life was good in Aleppo before the occupiers swept in and began the looting and the destruction”, he writes in an introduction to his vivid photos.

He could walk the streets and talk to and photograph anybody he wanted to. “These pictures here are real. They are genuine”, he writes.

What he was told by witnesses was the horror under “rebel” rule, where civilians were prevented, sometimes killed, when trying to flee “rebel” controlled areas. Many residents believe that the soft, reconciliatory philosophy of President Assad towards the militants is wrong – they would rather see the “Syrians who had fought against their own people” punished.

Öberg also writes about what he did not see. No massacres, no sign of the White Helmets so celebrated in the Western media, no sign of Western aid convoys, something that Western governments earlier had insisted on.

But most of all, he lets the photographs speak for themselves: https://janoberg.exposure.co/humans-in-liberated-aleppo