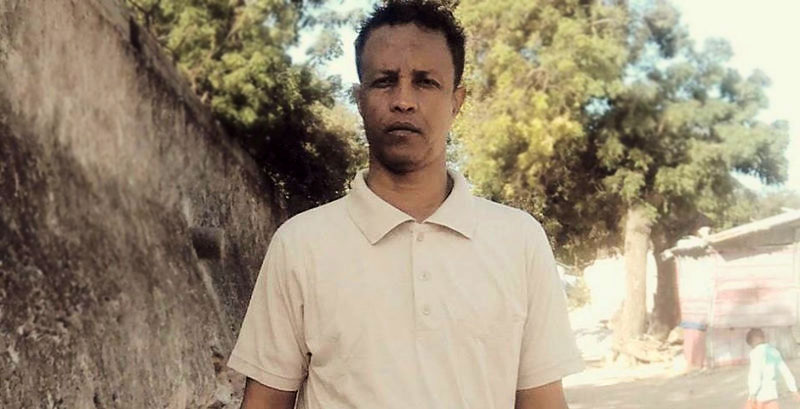 Mohammed Dinooz, 49, met with Free West Media's Africa correspondent Cate Mukei in Kenya. He had to flee from his homeland Somalia after converting to Christianity.
AFRICA

Converts in Africa are threatened by Muslims – from Europe

It is not uncommon that Somali migrants in Europe threatens Christian converts living in Somalia and Kenya. Free West Media's Africa correspondent Cate Mukei spoke with Dinooz, who previously worked as an accountant at Coca-Cola in Somalia, but who is currently hiding in a secret location in Kenya. The man who sent him death threats lives in Germany and claims to be 18 years old, but on his private Facebook account he writes that his age is 25.

Ex-muslims like Ayaan Hirsi Ali, a Somali-born Dutch-American activist and author and the Somali born activist Mona Walter who lives in Sweden seem to have set a trend for their countrymen. Although they still feel the heat for it, their quest for freedom of worship seems to have inspired some Somalis to abandon Islam while still living in Somalia where most residents are muslims.

Ayaan is an atheist female activist who has fought for free speech and the civil rights of Muslim women and against female genital mutilation while Mona is a Christian who lectures about her experience dealing with Islam on her social media accounts and on published articles.

Both women have faced opposition from muslim extremists to an extent of getting life threats.

Back home in Somalia, is the case of 49-year-old Mohammed Dinooz, who claims he was inspired by the work of Mona Walter who lectures on Islam in Sweden. Dinooz and his elder brother, Nur Dinooz, converted to Christianity 7 years ago.  Nur relocated to Kenya immediately due to threats. Dinooz, who was not confident enough to publicly proclaim his religion back then, stayed behind but has recently had to follow suit.

Dinooz, a former accountant at Coca Cola, is now surviving from hand to mouth in his hideout in Kenya thanks to threats by his fellow countrymen living in Europe. He is very cautious and was afraid of talking to us. It took him two days to respond to our request for an interview and his first question was: “Are you on my side?”

He also did not want us to know where exactly he lives in Kenya as he is afraid that his enemies, Muslim extremists, will come after him.

Dinooz claims that he is in trouble because he abandoned Islam and embraced Christianity. His “enemies” are fellow Somalis living in Germany and Finland. In three separate videos, the young boys who are hardly over 25 years old are heard calling upon Mujahedeen to execute Dinooz.

My family got me arrested and I was taken to jail where I was flogged and mistreated for days.

– I fled Mogadishu a month ago because of threats from Somali Muslims living in Germany and Finland. I have more than three videos and they have called upon all muslims all over the world to kill me, Dinooz exclusively told Free West Media.

Although, the father of one is temporarily safe in his hide out in Kenya, he still fears for his wife and 10-year-old son.

– Those people are not done with me. They recently called my 10-year-old son and threatened to kill him if he did not tell them where I had fled to, sais Dinooz who claims he prefers Christianity over Islam because it’s a tolerant religion.

He describes it as a religion of “forgiveness and peace”. The rest of his family still believes in Islam and are quite unhappy with his decision. So much that they even took him to a Wahhabi jail which is prison for people who don’t agree with their Islamic ideologies.

– My family got me arrested and I was taken to jail where I was flogged and mistreated for days. They did not want to take me to a normal jail because I could have easily been killed. They wanted me to suffer and be a lesson to the rest of the so called wannabe ‘kafirs’. I was only released after my friends on Facebook made so much noise about it.

Dinooz sais that the threats have now increased because his enemies are desperate to find him. In Somalia, it is not easy to convert from Islam to Christianity. Photo: FWM

Dinooz lost his job at Coca-Cola where he had worked for over 20 years, due to his religious stand. His colleagues felt uncomfortable around him and he had to be laid off to ‘enhance harmonious living’. Efforts to reach Coca-Cola Somalia have been futile as they did not respond any of our emails.

Dinooz got to Kenya by plane after getting air fare from a friend residing in London. Dinooz only has a three-month tourist Visa permit to be in Kenya. He is not sure about his next step but hopes to have a permanent residency in a country that allows him to worship without fear.

Free West Media got hold of one of the men threatening Dinooz. His name is Abdullahi Messi and claims to be a 18 year old high school student In Frankfurt, Germany. Despite being caught on camera making the threats Abdullahi accuses Dinooz of malice.

– Dinooz is lying. This has nothing do to with religion. It’s a tribal war. I love Christian’s because they accommodated me when I moved to Europe, Abdullahi said.

In the earlier stages of our interview, Abdullahi denies making any death threats to Dinooz before contradicting himself.

– He has changed. He insulted Islam and messed up my parents back in Somali. This really got me worked up, Abdullahi said.

He then changed his script claiming that it was a tribal war that had been going on for years.

Ironically Abdullahi claims he fled Somali in 2002 because he was being forced to join the most notorious terror outfit in East Africa, Alshabaab. A terrorist at age 4, that would mean.

He claims that apart from being a high school student he is also an artist. On the day he recorded the video, Abdullahi claims he was under alcoholic influence. He claims that he is now in trouble with the German authorities and blames it on Dinooz.

– Polizei (German police) recently contacted me and even though I explained to them, they are still monitoring me. I have even contacted Dinooz to apologise, Abdullahi said.

Apart from Abdullahi, other notorious threats come from Mogadishu based Wariye Caydiid Caragane  who on a post on his wall asks Dinooz to ‘either become a Muslim or he deactivates his Facebook account or he uses another name other than Mohamned Dinooz’. He later deleted the post.

A contact from Interpol in Kenya, who did not want to be named, said that cases of Somali’s in Europe threatening fellow countrymates are reported constantly.

– Most of them usually take the opportunity to settle scores from clan and religious differences through social media. Others are just juvenile boys trying to show off their claws on the internet when they hardly know what they are getting themselves into. We are watching them closely though, said our source.

Somali authorities are unhappy with the way refugees are being repatriated from neighbouring Kenya, after the Kenyan government deiced to close down Dadaab, the world’s largest refugee camp, by the end of 2016.

Makeshift camps in Somalia’s southernmost border state have been swelling with families as thousands of refugees are repatriated as part of a UN scheme.

But Jubaland state authorities have now suspended the returns process, saying local services are overwhelmed and the repatriation process amounts to the “dumping of human beings in an undignified way”. Refugee camp. The Somali refugees sent back from Kenya often have to live in camps like this.

With Kenyan elections approaching and anti-refugee rhetoric spurred on by the fear of the Somali Islamist group al-Shabaab, the government announced in May that it would permanently close Dadaab – home to more than 320,000 Somalis spanning several generations – and send all Somali refugees home by the end of the year.

In May, the Kenyan interior minister, Joseph Nkaissery, claimed al-Shabaab fighters were using the camp as a base for smuggling weapons. “For reasons of pressing national security that speak to the safety of Kenyans in a context of terrorist and criminal activities, the government of the Republic of Kenya has commenced the exercise of closing Dadaab refugee complex,” he said.

The United Nations and other aid groups have criticised the move, suggesting it may not be possible to force large numbers of people over the border into a country where a war is still raging.