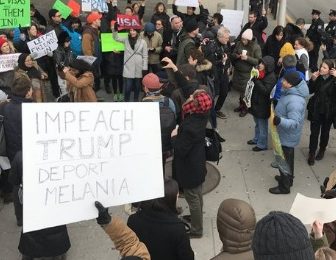 Legal teams flush with Soros money, deployed at airports across the country, complained this weekend that border agents were not complying with the court injunctions.

Lawyers pressing the cases acknowledged that their courtroom wins so far may directly benefit only a few people essentially caught in limbo when Trump signed his order Friday afternoon limiting travel from Iran, Iraq, Libya, Somalia, Sudan, Syria and Yemen.

The hysteria against the order appears to be part of a coordinated PR effort financed by left-wing billionaire George Soros. Trump’s executive order contains moderate refugee restrictions aimed at keeping terrorists out, similar to those that have been implemented by President Obama.

Protesters quickly materialized Saturday at JFK Airport, where only a few migrants were being temporarily detained. According to Breitbart, the signatories to the lawsuit filed Saturday to block Trump’s executive order included immigration lawyers from groups financed by Soros.

Legal teams flush with Soros money, deployed at airports across the country, complained this weekend that border agents were not complying with the court injunctions.

President Trump said in a new statement Sunday that he was not discriminating against those of the Islam faith.

“To be clear, this is not a Muslim ban, as the media is falsely reporting,” Trump said. “This is not about religion — this is about terror and keeping our country safe. There are over 40 different countries worldwide that are majority Muslim that are not affected by this order. We will again be issuing visas to all countries once we are sure we have reviewed and implemented the most secure policies over the next 90 days.”

But Muslims gathered inside of Dallas Fort Worth Airport with a loud Arab call to prayer in protest of this ban.

Alphabet Inc.’s Google asked foreign staffers who may have been affected by a new executive order on immigration to return to the US quickly. Google Chief Executive Officer Sundar Pichai slammed Trump’s move in a note to employees Friday, telling them that some 100 company staff had been affected by the order.

Microsoft said it was in touch with 76 staffers from the seven countries identified in the executive order, Bloomberg reported.

Airbnb would provide free housing to “refugees” and anyone not allowed into the US, Airbnb CEO Brian Chesky, tweeted.

Facebook’s Zuckerberg told Bloomberg on Friday he was “concerned” by Trump’s recent moves to restrict immigration.

A blanket entry ban “is not the best way to address the country’s challenges,” Tesla CEO Elon Musk said Saturday on Twitter.

BostonHarvard Business School has been forced to move classes for all first-year and some second-year MBA students online, following a spike in Covid-19 cases among their fully-vaccinated student body.