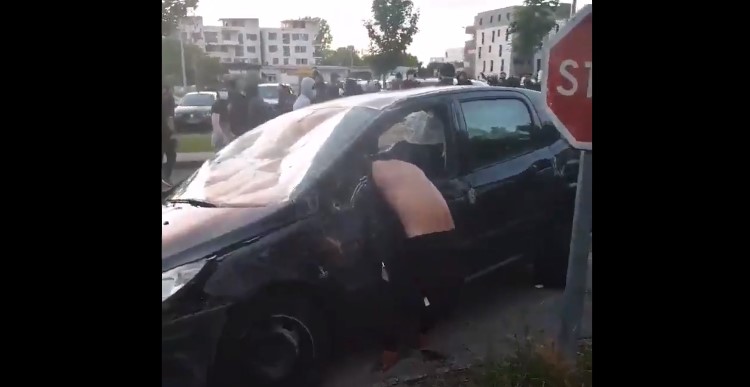 Delinquency and massive immigration: Dijon riots out of control

The scenes of violence that have multiplied in Dijon, in recent days have highlighted high crime, massive arms trafficking and non-integrated Arab and European Muslim communities in France. While the police have been facing severe criticism, this episode revealed a completely different picture.

Kalashnikovs and shotguns, car pileups worthy of Hollywood and gangsters of all kinds – in recent days, the capital city of the historical Burgundy region in eastern France, has become a haven for organised crime and delinquency. In a city better known for its mustard than for its settling of scores, viewers on social media discovered the reality of mass immigration to Europe.

The Mayor of Dijon has announced that special police forces is going to go in the town to restore law and order#France #Dijon #riots2020 pic.twitter.com/FEq7DJ7oeu

On June 10, a young man was attacked and threatened by Dijon dealers. But the 16-year-old boy is part of the Chechen community. The latter called for a vendetta on social networks after he was threatened with the words: “We will let you live so that you can tell the others that we will do the same with each of them.“

Consequently, many of them travelled to Dijon in order to avenge their comrade. Coming from all over France and from as far as Belgium and Germany, they were ready to fight and parade through the city center. They were filmed firing AK-47 assault rifles in the air and brandishing pistols.

On the evening of June 12, around a hundred Chechens armed with axes, knives and baseball bats marched towards a shisha bar in the center of the city, which is considered the point of contact for drug dealers. The Chechens forced the gang members to flee.

The Chechens explained in video messages to the residents of Dijon that they did not want destruction, but only justice. The rioters, on the other hand, presented themselves in videos as the “Arab Mafia”. They patrolled with pistols and weapons of war. They shot out all of the surveillance cameras in the neighborhood so that the security forces could no longer follow what was happening, setting fire to numerous vehicles and public property.

Only after the elite police force, the RAID, arrived, they calmed down.

Rebsamen declared on Monday that he “like all Dijoners very much like the beautiful district of Les Grésilles, in which he has invested a lot of money” and called the “‘young people’ who set fire to cars and build barricades” to go home, because he was promised more police officers by the interior minister.

Only the police “can provide security in the neighborhood, not the ‘youth'”. At the same time, he emphasized that Marine Le Pen was not welcome in the city.

Left-wing extremists threw stones at Le Pen’s vehicle on Tuesday through the city with impunity. Le Pen blamed the left and the civil right for “the monstrous reality to which 30 years of ideological aberrations have led”.

She called for an immediate immigration moratorium and the immediate dissolution of the mafia networks. “The secret services have to settle in the heart of the neighborhoods, the tax audits have to be carried out methodically to reveal the imbalance between declared income and an incredible lifestyle, the residence permits have to be withdrawn, the right to asylum lifted, residence bans imposed and expulsions carried out.”

The deputy interior minister, Laurent Nuñez, had travelled to Dijon, vowing an “extremely strong response”, with more than 150 police and paramilitary gendarmes mobilised to halt any unrest.

“I want to send a very clear message to the hooligans we have seen brandishing weapons, to the individuals who have come here to commit violence in Dijon,” he said.

“Our response will be extremely firm.” He added that “the perpetrators […] will be prosecuted and severely punished, commensurate with the serious acts”. However, three of the four people who were arrested Monday during the urban violence have been released, reported French daily Le Figaro.

Only one person, a 32-year-old man with no criminal record, was sentenced to a 90-day fine of five euros and a ban on holding or carrying a weapon for five years. The telescopic baton he was carrying, was confiscated.

On Tuesday, June 16, the Interior Ministry also declared that it reserved the right to examine “systematically the possibility of expelling foreigners involved, in accordance with administrative procedures”. According to information from le Figaro, it was Emmanuel Macron who himself asked Christophe Castaner to examine the possibility of expelling foreign nationals implicated in the violence.

The conservative opposition was unanimous in denouncing the government’s lack of firmness, and in particular the Minister of the Interior in this affair. “We can see that French society is extremely restless and that we need authority. Yes, I think he lacks authority,” said Republicans member Éric Woerth on LCI, on Tuesday, June 16, referring to Castaner.

To seal an “armistice” the two communities have approached a mosque instead, under the leadership of Imam Mohammed Ateb, the regional representative of the Union of Islamic Organizations of France (UOIF) and close to the Muslim Brotherhood, according to conservative weekly Marianne.

According to Marianne, representatives of the Chechen and Maghreb communities, who fought a fierce war in the Grésilles district, gathered in the garden of the Brotherhood mosque, under the leadership of Imam Mohammed Ateb, in the evening of Tuesday June 16. The father of the young man, whose aggression had triggered the punitive expeditions, was present.

“We are here for an explanation, in a conciliation process, to make things easier. We are one community, we are all brothers,” said Imam Mohammed Ateb, whose words were reported by Marianne .

Another imam, this time Chechen, joined them. According to a Chechen source in the weekly, representatives of the Maghreb community in the Grésilles district recognized the wrongs of the attackers of the young boy and apologized, accepted by their counterparts. But Mohammed Ateb is said to have made it clear that the “talks” being held “do not represent young people”.

While the state has been powerless to bring calm to Dijon after Laurent Nunez’s failed promise to provide “a firm response”, a peace deal was sealed at a mosque. “Everything concerning drugs and trafficking is the responsibility of the state and the courts,” said the imam.

This conflict was therefore basically a matter of “honor”, according to Marianne. “We Chechens are united. When one of us is threatened and victim of an injustice, everyone mobilizes,” an interlocutor told the weekly.

“This way of doing things is characteristic of the Chechen tradition. We prefer to settle this between us rather than to appeal to justice,” he concluded.

The events in Dijon certainly demonstrated the total failure of the French political elite.