Jürgen Elsässer (centre) at a rally in Berlin. Twitter
Berlin

Last week in Berlin's House of Representatives saw a grand entrance by Ukrainian ambassador Andrij Melnyk. The man has become notorious in recent weeks for demanding more and more weapons from Germany and insulting the pro-Ukrainian German Chancellor Olaf Scholz on talk shows.

But for Melnyk, like his president, enough is never enough: NATO should establish a no-fly zone in Ukraine– that means a direct military confrontation with the Russians. In plain language: the Third World War. 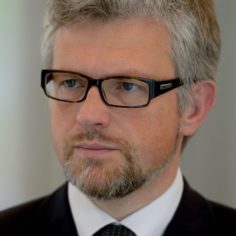 What does an opposition party do when someone like that enters parliament? Protest with signs saying “warmonger”? Do they stage a walk-out? At least remain silent in their seats? The Berlin AfD parliamentary group did nothing of the sort. Like all the old parties, their MPs rose dutifully from their seats and applauded the deluded Melnyk.

There were two only exceptions: the MP Gunnar Lindemann and his caucus colleague Harald Laatsch had wanted to remain seated when the Kiev extremist took to the podium. But the embarrassment for the rest of the AfD people would have been to great. It was therefore agreed that the two did not have to be present during Melnyk’s appearance and could go off and drink coffee.

On Thursday morning, the same comedy was performed in the German Bundestag: Ukrainian President Zelensky spoke (via live video link) to the MPs.

The Ukrainian president shamelessly appealed to Germany’s “historical responsibility for Ukraine” during his speech to the German Bundestag. Some 80 years after the Second World War, cities like Kharkiv were being destroyed again, he lamented. In view of what he sees as Germany’s still strong economic ties to Russia, he wondered whether the words “Never again!” were still worth anything.

Germany and other countries had put the brakes on many sanctions before the Russian invasion, thus encouraging Russia, he whined. For some, only “economy, economy, economy” counts. The clown singled out the Nord Stream 2 gas pipeline, which has been put on hold in the meantime.

The Ukrainian President renewed his accusations that Russia was “waging a war of extermination in Ukraine”. Schools, hospitals and churches were allegedly being shelled. In this context, he recalled the massacre of Jews by German soldiers in in 1941. He explicitly thanked the companies that put “the lives of children” above economic interests. He ended his speech to standing applause from all factions with the words “Long live Ukraine”.

His Russian counterpart had earlier denounced the ruling clique in Ukraine as a “bunch of neo-Nazis”, but according to Zelensky that was impossible because he is Jewish. On the sixth day of the conflict, he had accused Russia of having bombed the Babi Yar memorial where the Jews had been massacred by the Nazis.

The Yad Vashem Memorial, the Israeli institution that preserves the memory of the Nazi “final solution of the Jewish question”, issued an angry statement condemning the bombing in the strongest terms. Except that the whole thing had been faked.

“Then Israeli journalists went to the crime scene to find that it had never been bombed. The Ukrainian president had lied. Then the Kremlin spokesman, Dmitry Peskov, invited the Yad Vashem Memorial to send a delegation to Ukraine to see for themselves, under the protection of the Russian army,” Thierry Meyssan explained.

German editorialist Jürgen Elsässer meanwhile expressed his frustration with overly subservient politicians. “German patriots must represent German interests, not Ukrainian ones. There are arsonists ruling in Kiev who want to drag the whole world into the abyss in order to save their regime. Ukraine’s strongest fighting units like Azov are real Nazis who dream of their own power but only do the dirty work for NATO.”

He said peace with Russia was in Germany’s interest. “Whenever there has been peace between the two peoples, whether under Chancellor Bismarck or Chancellor Brandt, it has been good for the two peoples – and for the German continent. If there is one lesson to be learned from history, it is this: Germans and Russians must never again allow themselves to be set against each other.”

He said Germany should withdraw from the NATO war front right away. “Not a soldier for NATO, not a cent for NATO, no sanctions against Russia, no hatred of Russia. Instead, open Nord Stream 2, the pipeline of peace. Even in the coldest times of the Cold War, Moscow never misused its energy supplies to blackmail Germany.”

He added that only neutrality would ensured the survival of German-speaking people. “Without NATO, we can initiate a belt of non-aligned states from the Baltic to the Black Sea – at peace with America and Russia.”

The Green Economics Minister Robert Habeck is aware of the changing mood in Germany and has warned of the unforeseeable social upheaval that would result from an immediate cessation of oil and gas supplies from Russia. In terms of domestic policy, this could have catastrophic consequences similar to those of a no-air zone enforced by NATO over Ukraine in terms of foreign and military policy.

Do Germans really value solidarity with a regime of the multimillionaires Zelensky and the mayor of Kiev, Vitali Klitschko? The social question is inevitably linked to the war, because voters will ultimately receive the bill for solidarity with the Zelenskys and Klitschkos.