Germany’s Special Forces Command (KSK) will be disbanded “over far-right links”, Kramp-Karrenbauer said. “We will give the KSK time to press the reset button,” she added.

Kramp-Karrenbauer announced structural reforms of the KSK unit, which include the dissolution of one of its four combat companies. And should the KSK fail to transform completely by the end of October, it will be disbanded as a whole.

A Deutsche Welle video report on the decision featured the testimony of a soldier within the ranks: “Someone made a joke about Jews. It was about long noses, things like that. Then someone else said, ‘What’s that, mate? You’re saying there are still Jews? I thought we’d eradicated them all. We’ll have to have another go at that.‘”

Defense policy spokesman for the AfD parliamentary group, Rüdiger Lucassen, criticized the dissolution of the elite unit Command Special Forces (KSK). “There is reason to fear that the measures that have now been announced will impair the operational readiness of our special forces in the long term,” said Lucassen.

At the same time, he accused Annegret Kramp-Karrenbauer (CDU) of failing to lead the Bundeswehr. The failure of the military and political leadership ultimately led to serious disciplinary offenses. “With good leadership, military training and the required duty of care of the superiors, a military association does not have to be dissolved.”

His party colleague and Berlin AfD parliamentary group leader, Georg Pazderski, complained last week that the dissolution of the second command company of the KSK would ignite completely unfounded general suspicions against all soldiers. “Kramp-Karrenbauer is weakening the troops, which are already struggling, by another low moral blow and is negligently jeopardizing Germany’s security.”

Kramp-Karrenbauer said that every KSK soldier had to decide whether he wanted to remain in the army by making the right political choices. A special representative will report by October on whether the steps ordered by Kramp-Karrenbauer were be implemented.

The greatest enemy of the Bundeswehr is now its own leadership it seems. The social upheavals that have shaped the public climate since the beginning of the migrant crisis, have also gripped the armed forces, testing the relationship between superiors and subordinates. Deviating opinions have been considered undesirable since the notorious defense minister Ursula von der Leyen’s remark about an “attitude problem” in the troops.

Again and again there has been talk of vast “right-wing networks” within the Bundeswehr, for which no proof has been provided so far except for one or two incidents outside the norm. And contrary to the regular assertion that the troops are “not under general suspicion” (according to the military commissioner Eva Högl), this serves to massively restrict soldiers’ rights. 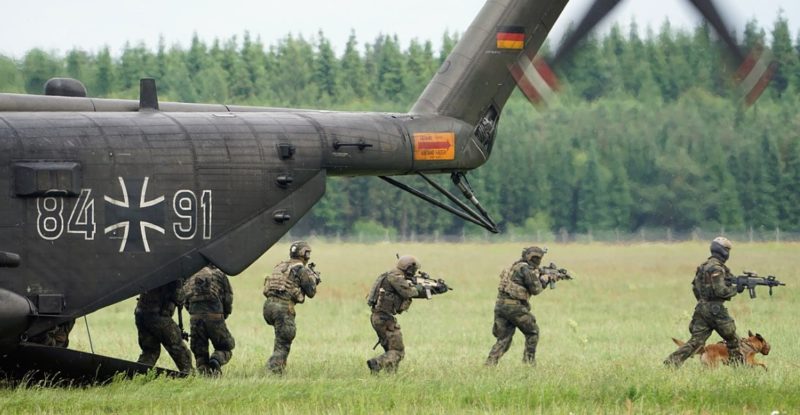 A new law is being imposed stating that soldiers found guilty of a breach of duty can now be dismissed more easily during their first eight years of service and no longer within four years as before. This means a doubling of the “trial period” during which a soldier can be removed by the personnel office while not being entitled to a trial before the military court.

In addition, the period in which a soldier can be disciplined for an offense will be increased from six to twelve months and significantly higher fines will be mandatory in the future.

In reality, this means that allegations of alleged transgressions by individual soldiers no longer need to be substantiated.

While Kramp-Karrenbauer believes she has found an effective tool in the “fight against extremism”, the Bundeswehr Association called it “unfair and disproportionate”. The association sees the rights of its members sacrificed in favor of a media campaign.

This will be reinforced by a funded “reporting culture” in which soldiers spy on others and report in secret to superiors. To enforce this new Stasi-like system, the government will make use of questionable civilian sources such as the neo-Marxist Amadeu Antonio Foundation.