SA President Cyril Ramaphosa has no means to stop the implosion of the country. Photo: Flickr/'Free Zuma' sprayed on a wall in Durban. Photo: FWM
Durban

Durban is the third most populous city in South Africa after Johannesburg and Cape Town and the largest city in the South African province of KwaZulu-Natal. Zulus, the largest black tribe in the country, form the largest single ethnic group in the city too. FreeWestMedia has received reports of residents in areas hardest hit by ongoing riots, abandoning their homes. What may have started as a political protest has descended into anarchy. 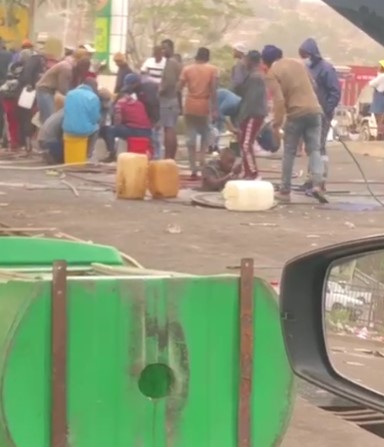 Looters in Durban filmed as they steal fuel from an underground storage tank. Photo: FWM

The violence and looting that erupted after former President Jacob Zuma’s arrest last week have widened and have left a trail of destruction in its wake. Warehouses and supermarkets in Durban, one of the busiest shipping terminals on the African continent and an import-export hub, have been cleared out or burned down.

Durban forms part of the eThekwini Metropolitan Municipality, which includes neighboring towns and has a population of about 3,4 million, making the combined municipality one of the largest cities on the Indian Ocean coast of the African continent. Durban was one of the host cities of the 2009 World Conference against Racism, the 2010 FIFA World Cup and boasts the highest number of dollar millionaires added per year of any South African city with the number having increased 200 percent between 2000 and 2014. The city has now virtually been reduced to rubble by marauding Zulu mobs.

Rioters were prevented from setting fire and burning down only a hospital full of patients in Durban as the violence and destruction of property continues. On the R102, paramedics were ambushed and the ambulance carrying a critically ill patient in need of oxygen, was stoned with bricks. And there are countless other similar reports in the mainstream media.

In Gauteng, the police are fighting running battles with looters as violent protests continue to spread. At least 72 people have died according to the SAPS.

The military, the SANDF, has been deployed in the black township of Alexandra in Gauteng. Alexandra happens to be near Houghton, one of the most expensive neighbourhoods in Johannesburg where ANC dignitaries, bankers and business owners live. FWM also received eyewitness reports of the military being deployed around critical infrastructure on Tuesday night.

A FWM team in Johannesburg were surprised to see almost no vehicles and no military deployment in other black townships on the usually busy roads on Wednesday morning while shoppers stood in long lines to stock up on food supplies in areas where some shops were still open. The giant Mall of Africa complex remained closed for the time being. The team encountered roadblocks in the town of Springs last night set up by residents to direct traffic away from stone-throwing mobs.

Not even the cold spell in Gauteng with temperatures below freezing point, has stopped the spread of the ruination of the country. Some pundits have alluded to a coup d’état mounted by the imprisoned Zuma.

In Durban, looters were caught on camera stealing fuel from an underground storage tank. According to eyewitnesses, almost every small town in KwaZulu Natal has been laid to waste. They have been deprived of all services, banks, ATMs, food stores and medical supplies. 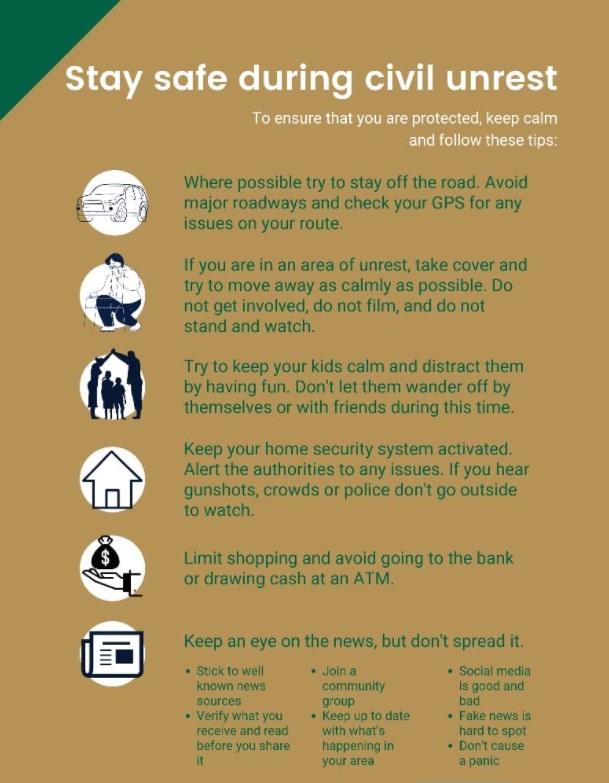 According to an FWM source, not a single town was spared and the destruction was wrought within the space of 48 hours. “They have stolen heavy machinery to demolish bridges and block roads,” the source said. “The magnitude of what has happened in 48 hours boggles the brain […] There is nothing left.” The source urged whites to prepare for the worst as mobs could soon move out to set fire to farms. The source added that this was not going to “end tomorrow” since it has been a planned exercise.

A South African private security company sent out warnings to their clients, also urging them not to venture outdoors, to stay off the roads and to keep their security systems running. This may be a challenge since many systems rely on electricity which may not be a given with state utility Eskom warning of power cuts.

@elisetempelhoff from someone in Durban who has just evacuated their home “Warzone all around us still getting worse. Bullets flying, shouting and screaming. I never thought my family and I would experince something like this🙈”

Milk producers are dumping their milk while egg and vegetable producers are unable to get their produce to the end users due to the unrest consuming KwaZulu-Natal. | @WitnessKZN https://t.co/ET0Bk1ukjL