The conservative American TV presenter Tucker Carlson spent the first week in August, in Hungary. Carlson's program, Tucker Carlson Tonight, was broadcast daily from a hotel roof in central Budapest and he repeatedly mentioned how Hungary has chosen a different path, while most of the western world has seen ongoing migration, woke and white debt culture spread while the traditional family is increasingly being replaced by LGBTQP and Pride. During the week, Carlson also visited the Hungarian border fence with Serbia and interviewed Hungarian Prime Minister Viktor Orbán.

Tucker Carlson also spoke at a national conservative festival organized by the Hungarian University Matthias Corvinus Collegium (MCC). The BBC described Tucker Carlson as “the most influential thinker in the United States” and the University of MCC is outlined as follows: “MCC is an extremely well-funded school for top students that the Orbán Fidesz government carefully nurtures to become the country’s new right-wing elite.”

Carlson painted a picture of a West in crisis and where Hungary was a shining exception for others to be inspired by. Carlson, who many believe could be the Republicans’ next presidential candidate, also said he sees Hungary as a much freer country than today’s United States. He developed the reasoning for the conservative Hungarian weekly Mandiner and said that Orbán “defends democracy against billionaires, activist organizations and certain Western governments”. He added: “The American political elite has become too mediocre and stupid to be able to handle the truth.”

According to the BBC, Hungary is an example for conservatives of successful right-wing politics, and the BBC believes that this consists of “reduced freedom of the press”, “advocacy of the nuclear family” and “ethnonationalism”.

After Carlson’s speech, Nya Tider exchanged a few words with Kőrösi Kristóf, MCC alumni and political debater, who said that the left’s propaganda is losing its power as a traditional right has emerged based in Hungary. 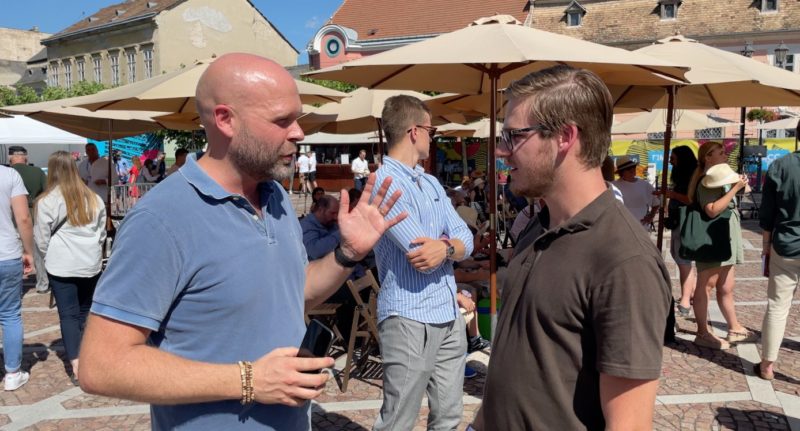 “I agree one hundred percent with Tucker Carlson that other countries should follow the Hungarian model,” Kőrösi said.

After more than ten years with Prime Minister Viktor Orbán in power, Hungary has secured its place on the map of Europe. The country is today strongly associated with a stubborn right-wing conservative and nationalist opposition to globalism and its various ideological expressions: multiculturalism, LGBTQP, cultural radicalism, postcolonialism, wokeness and white guilt. 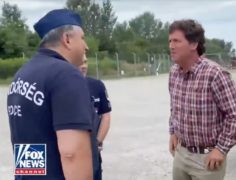 In 2015, the ideological conflict between Brussels and Budapest deepened when Hungary built a more than 400km long border fence to keep illegal migrants out of Hungary and the EU. Since then, the irritation of the EU elite has lain mostly dormant but has occasionally been vented through new political attacks on Hungary. Sometimes it has been about migration policy, other times about the Hungarian government’s campaign against the globalist George Soros or about how the Hungarian government has strengthened its – and thus the democratic system – influence over the Hungarian cultural sector and the country’s education system.

In connection with the loss of left-wing media by its private owners, the EU has attacked Orbán and thus implicitly indicated that it sees it as the member states’ obligation to keep left-wing media under their control.

Hungarian electoral movement is reflected in conflict between Brussels and Budapest 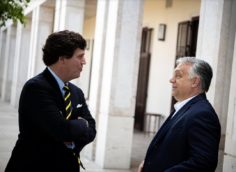 In April 2022, the Hungarian parliamentary elections will be held and the election campaign has kicked off with the governing party Fidesz launching a series of new laws presented this summer. In Hungary, it is called the “anti-pedophile law”. The Anti-Pedophile Act severely restricts the possibility of reaching Hungarian children with propaganda or activism of a sexual nature. In particular, pornography and deviant sexualities can now not be exposed to minors at all. The series was voted through at the same time as this summer’s annual Pride was launched all over Europe.

As expected, those in power in Brussels and the western and northern countries of the continent exploded with rage. However it was expected, and according to Viktor Orbán’s plan, the Hungarian government responded by announcing a referendum on the issue to be held this winter, a few months before the parliamentary elections. Opinion polls already indicate that at least three out of four Hungarians share the government’s view on the issue of sexualization of children, so the result of the referendum can be assumed to play into the hands of the ruling party in the election campaign, as voters rally behind their government and reject the dictates from Brussels.

Work behind the scenes is beginning to bear fruit

Behind the scenes of the visible conflicts between Hungary and the EU, there is an ongoing struggle for the institutions of society, accompanied by problematic formulations, curious descriptions of reality, identity and gender language use. Under Orbán, the Hungarian national right has consistently succeeded in subduing so-called progressive advances with left-wing strongholds either cleared out or rivaled. Fidesz has focused on cultural institutions, schools and universities, courts, the media and civil society. 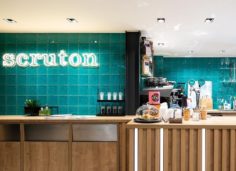 Hungarian coffee shop Scruton in Budapest. British philosopher Sir Roger Scruton was declared by Boris Johnson as “the greatest modern conservative thinker”. The coffee shop chain dedicated to him, said John O’Sullivan, a former speechwriter for Margaret Thatcher who now chairs a Hungarian think tank, was funded by the Batthyany foundation, which also paid for the Scottish historian Norman Stone to write a history of Hungary. Stone was a former adviser to Thatcher. He passed away in 2019. Instagram

New national conservative schools, research foundations and think tanks have been founded and a broad and strong business community that sympathizes with the Hungarian government has built a whole network of opinion-forming businesses: newspapers, online media and TV channels, its own international news agency and even a conservative café chain called Scruton, found in every Hungarian student city.

The chain of coffee shops in British philosopher Roger Scruton’s memory, first opened in November last year in Budapest and is filled with Scruton memorabilia donated by his widow, Sophie.

It is with this basic construction that MCC has been able to organize a large national conservative festival over several days, from morning to night and with hundreds of program points. And they were able to attract guest speakers such as Tucker Carlson and Dennis Prager.

Regarding potential international interference into the Hungarian elections, Orbán told state broadcaster MTI “we are not worried because we are prepared. Of course, the international left wing will do everything to change the government in Hungary. We are prepared for that,” he said.

In a subsequent interview with the Fox News host, Orbán underscored that his country had the right to make such decisions: “It’s coming from God, nature, all arguments are with us. This is our country, this is our people, history, language, so we have to [protect them]”. He said entering a country without permission is no basic human right.

According to Orbán, the EU’s new “post-Christian and post-national” regime was based on the co-existence of various communities. “There is no way to know whether the outcome of this will be good or bad, but I think it is very risky… Each nation has the right to take this risk or reject it. We Hungarians decided not to take that risk,” he added.