Australian mining magnate and politician Clive Palmer has called out the disgraced Gladys Berejiklian - who was forced to resign as New South Wales premier - as one of the recipients of tens of millions of dollars from Big Pharma to lobby for Covid shots.

On 1 October 2021 Berejiklian announced her intended resignation both as premier and member of the Liberal Party following the commencement of an Independent Commission Against Corruption (ICAC) investigation to determine whether a “breach of public trust” had occurred.

Berejiklian provided little clarity about which businesses could remain open and failed to answer questions if Louis Vuitton luxury stores were essential and therefore could remain open. After public pressure, the government released a list of authorised workers. But on the day the authorised workers list was released the Local Government Areas (LGAs) of concern which already had the toughest restrictions in NSW had further restrictions such as night curfew put in place. 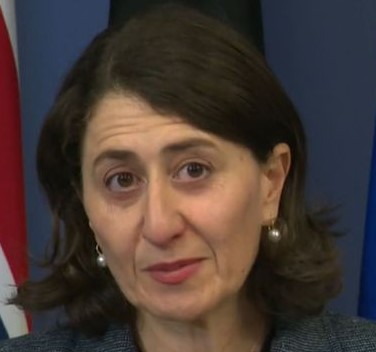 Lockdown termagant Gladys Berejiklian’s five-year romance with MP Daryl Maguire, and a $5 million grant that was given to a gun club in Daryl Maguire’s electorate in 2017, when Berejiklian was treasurer, earned her a first corruption probe. Screenshot from 9now.nine.com.au

The discrepancy in enforcement between different suburbs in the LGAs of concern was massively criticized,  since Berejiklian’s restrictions were unrelated to the levels of transmission  or population demographics.

Palmer has meanwhile called on employers and heads of government to stop coercive practices forcing people to be vaccinated or lose their jobs. “Thousands of distressed Australians are contacting the United Australia Party because they have been told ‘no jab, no job’ by their employer,” Palmer said.

“These coercive measures are causing untold levels of anxiety, stress and financial hardship to innocent Australians. “Many are public servants. They feel they have no voice and nowhere to turn. I want to assure all Australians that our party is here to listen and make a difference. “We will fight to protect the values that have been built and developed in Australia since federation,” he added.

“It is undemocratic and wrong to deny any Australian their constitutional rights and freedoms because they choose not to take part in a vaccination program for personal or medical reasons.

“The data is clear. The virus doesn’t discriminate between those vaccinated and those not vaccinated. So-called ‘fully vaccinated’ people can still be infected and can also pass the virus on to others,” he said.

Palmer, who leads the United Australia Party, said that vaccination, therefore, had no impact on the ability of an individual to perform their workplace duties. “Hundreds of people are contacting UAP every day as they feel they have nowhere else to turn. Nobody is helping them or even hearing them. “It’s time employers and governments stopped to think about the havoc and distress they are causing in people’s lives.”

For a population of 25,6 million, Australia bought the following vaccination doses:

Plus 51 million Novovax, if approved.

That means that there are some 256 million vaccine doses for 25,6 million people or 10 vaccinations per person.

What Clive Palmer is describing is happening world wide.

We need to bring this criminals to account.pic.twitter.com/0d5FUXTJXx

Two MONTHS of lockdown. Police beating people in the streets. Every aspect of your life micromanaged by the world’s dumbest people.

Luckily, it was all pointless.https://t.co/b28rHTCWw0

Australian army veteran: 3 of the 24 000 children vaccinated at a stadium are now dead

Earlier this month, New South Wales' Minister of Health, Brad Hazzard, announced at a press conference that 24 000 children would be vaccinated against Corona at the Qudos Bank Arena in Sydney.

SydneyFollowing the large-scale demonstrations against Corona restrictions, the police in the state of New South Wales have set up a task force with the aim of tracking down all those who took part in the protests.

CANBERRAAustralia is planning to ban all illegal boat migrants from ever entering the country. The country already has a strict refugee policy, and these measures would represent an even tougher immigration stance. Canberra insisted that the tough policy was aimed at preventing migrant deaths at sea.