In 2020, a new generation of drill rappers hailing from the villages of Kumasi, Ghana. They call it ‘Asakaa’. Inspired by American 'gangsta' rap, that they sound, dress, talk and act like them. They’ve even changed the name of their city to ‘Kumerica’ in homage to the USA and call themselves ‘Kumericans’. Screenshot from YouTube
Antwerp

In Antwerp, Belgium, rappers display their violence in videos and call for robberies and knife attacks. These young people do what is called “drill”, a musical sub-genre of hip-hop launched in the late 2000s by young rappers and producers from the South Side neighborhoods of Chicago. The drill is characterized by lyrics with violent, morbid, dark content and an irregular rhythm.

Groups such as SOV (Soldiers of Violence), K9, SSQ (Sinsquad), KPK (Kielpark) LSQ, ZOt, W25 have appeared in the working-class neighborhoods of the metropolis. Their members are mainly young Africans and South Americans from neighborhoods such as Deurne-Noord, Luchtbal or Het Kiel.

These are mostly underage immigrant youths who show off violence in video clips and call for robberies, robberies and stabbing opponents. In fact, they earn points for each act. On social media, the drill rappers keep up their daily leaderboards. The Antwerp police say they are on top of the phenomenon to prevent any escalation, however several people have already been killed in confrontations between drill rap groups in the Netherlands.

An export from the US and UK

Drill rap, a style of music that originated in the United States, is characterized by the sound of firearms that has been commonplace in these cities. The drill rap ended up in the Netherlands via Great Britain. Especially in Amsterdam and Rotterdam the drill rap groups are caught in a struggle for life or death. Last summer, a 19-year-old was stabbed to death on the Pier of Scheveningen during a confrontation. Several people were killed in the battle between drill rappers in Amsterdam as well.

The youth prosecutor’s office and the youth crime section of the Antwerp police keep a close eye on the development in the Antwerp scene in order to prevent any escalation. This summer there were already incidents when drill rapper S3 founded his own group SOV (Soldiers of Violence). His former supporters of drill rap group LSQ from Deurne challenged him by breaking a window at his home. When he came out to clear the glass, he was stabbed. “LSQ Members stabbed his chest, arm and back,” the LSQ guys rapped in their victorious response. 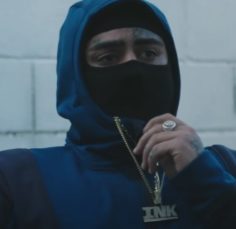 Masked Irish drill rapper INK. The violent lyrics of drill rap have been cited by police, MPs, journalists and others in positions of potentially significant influence as the reason for a climb in the rate of knife crimes in London. Screenshot from YouTube/Wikipedia

Also in Deurne-Noord, a stabbing took place in August in which a boy was injured. A drill rapper later posted a video on social media in which he bragged about the stabbing. The number of language errors in the videos are notable.

Furthermore, drill rappers also commit robberies. For example, a drill rapper is currently in custody for a robbery at a chip shop. “He risks four years in prison,” the group members said in a video.

Antwerp has been confronted for some time now with a group of young people who call on social media for the looting of boutiques, attacks on other young people with knives and push each other into committing thefts with violence, usually with weapons.

Kristof Aerts, spokesperson for the public prosecutor’s office in Antwerp, did not want to give details about incidents, nor about the number of young people who have already been sanctioned. Aerts only confirmed that drill rappers cause problems. “It cannot be ruled out that drill rap incites certain young people to violence. The Antwerp youth prosecutor’s office works closely with the Antwerp police on this phenomenon. There is always strict and resolute action.”

Drill rappers meticulously maintain a scoreboard that they regularly post on social media. The account “Belgiandrillnews” is their home base. On YouTube, drill rapper Tranqi is the man who collects the latest news in the scene. On most videos the young people perform masked.

Points are earned when you attack a member of another drill rap group on the street. That could be literally by having him kiss your shoes. You can also chase an opponent so that he takes shelter with his parents. That is also worth a point. Stabbing (‘dip’ or ‘diss’) earns extra points, just like having someone locked up in a closed institution. If you let yourself be caught by the police, you lose a point. Or if a counterattack earns your sister a haircut, you lose a point, too. Cornering an opponent and just making him say ‘sorry’ or having him sing a song is also good for points.

Antwerp youth lawyer Chantal Van den Bosch has had to deal with members of drill rap groups several times. Like the police, she is concerned about the ease with which these young people speak out about violence and weapons. “They act tough in their rap videos and they live up to it. They live in their own video world, that’s how I feel. As an outsider, I find that surreal. They all have a knife in their pocket. That seems the most normal thing in the world to them. Fortunately, the police are on top of this new phenomenon. If these young people are allowed to stay, we will also get Dutch situations here,” explained Van den Bosch.