Why should those vaccinated against Covid-19 be restricted in their movements and participation in society? Because vaccinated people are "the biggest virus spreaders", German doctor Kenan Katmer from Bochum explained.

According to a report by the WAZ, the doctor runs a family doctor’s practice in Altenbochum, where he also offers Corona tests and vaccinations. From the results of the tests in his own practice and the four test centers in Bochum, he was able to conclude that “90 percent of the positive people who were tested by me were vaccinated.”

Katmer pointed out that “most of the vaccinated (…) think that with the vaccination the Coronavirus will no longer harm them, but that is a fallacy”.

The physician believes a two-month lockdown only for vaccinated people should be declared by public health authorities. If these restrictions were then adhered to, the contacts reduced and the vaccination campaign continued, “the pandemic would then end quickly”.

Dr. Katmer apparently is not alone: ​​Dr. Michael Tenholt from the Medical Quality Network in Bochum shared his colleague’s opinion. Instead of a lockdown, he spoke out in favor of additional compulsory testing for vaccinated people: “It is true that many people who are vaccinated feel too safe. Therefore, in my opinion, it is important to also test the vaccinated.”

In France, Professor Christian Perronne, one of the most renowned French experts on infectious diseases and long-standing government advisor, has long been a firm skeptic of the Covid-19 vaccination policy – and not just in his home country. With a view to the situation in Israel and Great Britain, Perronne has now publicly called for people vaccinated against Covid-19 to be quarantined and isolated from society.

The provocative demand is a reversal of the current narrative underscoring instead that the vaccinated are dangerous for others and not the unvaccinated. Especially in Israel and Great Britain, where the world’s largest vaccination programs are running, the most severe Covid cases are among vaccinated people in hospitals, according to Report24.news.

The fact is that the vaccinations have not been doing what was promised for months. It has now been scientifically proven that “the effectiveness of the vaccine against symptomatic SARS-CoV-2 infection gradually decreases over time in all subgroups, but at a different rate depending on the type of vaccine and more quickly in men and especially in elderly, frail men.” The effectiveness against serious illnesses seems to remain high for nine months, “but not in men, elderly, frail people and people with comorbidities,” a recent study from Sweden showed.

The authors concluded from this that only a further vaccination, or the “booster”, could help.

And here the real dilemma for vaccine pushers is revealed: Scientists, the manufacturers and governments had no idea what the vaccine, its effectiveness and side-effects would be. Despite not knowing, they were touting them as “safe and effective”.

The mass experiment that the world has had to endure for almost a year now and which is called a “vaccination strategy” may be running out of “guinea pigs”. Essentially, if there is no control group, it would be more difficult to prove the negative effects of the shots. For that reason, compulsory vaccination is being discussed so that the test group of vaccinated people becomes even larger. And it is somehow ignored that the vaccine was developed against the “wild wet market” type of SARS-CoV-2, but not against the predominant Delta variant.

A new vaccine against Omicron is on the shelf, but would have to be approved again. It is not to be expected that the studies required for this will again show a fake “vaccination success rate” of 94 percent. Therefore, Pfizer and BioNtech are pushing for boosters containing the old ineffective vaccine against a new variant. 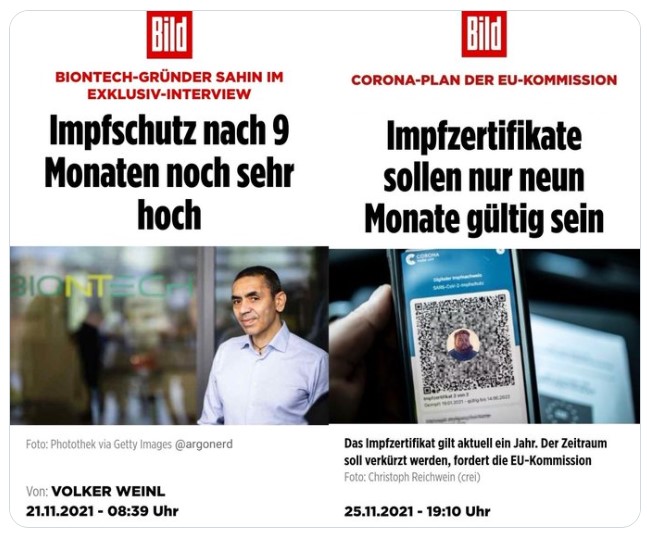 The ridiculous contradiction on the frontpage of Bild that Covid cultists choose to ignore. Twitter

The lies continuously spouted by the mainstream are well-illustrated by two frontpages only days apart from the German tabloid Bild. On November 21, the BioNtech founder declared that the “protection” of the shot was still “very high” after nine months. Four days later, the EU Commission announced the expiry of health passports… after nine months.