The western African country of Cameroon is one of the nations with the fewest victims in the pandemic: Only 100 000 infected and 1 600 deaths were counted among its 27 million inhabitants. That means that the incidence rate is 50 times lower than in European countries.

This fact is all the more remarkable since very few people are vaccinated in Cameroon. Despite a second, more detrimental, Covid-19 wave, the expected death toll in Africa and Cameroon has not occurred even as it hosted the football African Nation Championship in January, 2021, an event that saw thousands of supporters from across Africa come together.

The vaccination campaign run by the government under the auspices of WHO was a fiasco. Barely 1 percent of Cameroonians received their first dose, and only a quarter of them have had their second shot.

On the other hand, almost all of them went to a healer and took the traditional herbal mixture developed against Covid-19. Because they trust their medicine men more than the vaccines from abroad, according to a report from French television ARTE.

Cameroon’s Minister of Public Health Manaouda Malachie told the National Assembly in June this year that those who took the jab did not necessarily experience any health benefits: “I think they are morally safer than those who have not been vaccinated,” he was quoted as saying on national television.

On the markets, but also in some clinics, herbal products against Covid-19 abound. The government has encouraged their manufacture and even approved many of them, including an “anti-Covid elixir” developed by the Archbishop of Douala.

Cameroonians have also touted palm wine as one of the best medicines against SARS-CoV-2. It is made from the nectar of the rafia palm and oil palm, popular in most countries of West Africa, especially in south-eastern Nigeria, Ghana and Cameroon.

Its sugar content causes rapid fermentation which increases the alcohol level after just 2 hours. So, with palm wine, the older the wine, the stronger the punch.

An article published on Vitisphère first entitled “new study confirms that wine protects against Covid-19” published on February 2 (and later changed to but with the same content: “new study supports the hypothesis of a protective effect of compounds in wine against Covid-19) was based on a study from the University of Medicine of Taiwan, which “found that the tannins in wine effectively inhibit the activity of two key enzymes of the virus, which can then no longer penetrate into cell tissues”.

Published on December 1, 2020 by several researchers in the American Journal of Cancer Research, this study conducted in vitro examined the action of natural compounds present mainly in fruits in the prevention against the Coronavirus. Among these substances is tannic acid.

The latter belongs to the tannin family, and more broadly to those of polyphenols. It is present in wine but also in legumes, sorghum, as well as in commonly consumed fruits such as raspberries, bananas and persimmon. It is attributed in particular to antioxidant virtues, according to the authors.

Tannic acid does inhibit a “protease”, an enzyme, which is a Covid co-receptor. In cultured cells, it also inhibits the entry of the virus.

The Archbishop of Douala scores big with his herbal remedy 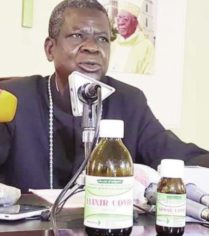 Samuel Kleda, Archbishop of Douala in Cameroon, presenting his herbal tonics against Covid-19. He told the press in July that some 4000 patients had been cured by his products. Screenshot from YouTube

Last year, Samuel Kleda, Archbishop of Douala in Cameroon organized a meeting with the press to take stock of the effectiveness of the herbal remedy that he has been offering to treat the Coronavirus. “We have defeated the Covid-19 in Cameroon”, said Kleda.

The Ministry of Public Health authorized the production and marketing of the Cameroonian prelate’s products on July 8, 2021.

“Following your application for marketing authorization in Cameroon for your improved traditional medicines called Adsak Covid 15 ml bottle and Elixir Covid, 125 ml bottle, I have the honor to inform you that your request has received a favorable opinion from the Medical Medicines Commission meeting in its session of May 17 and 19, 2021. The indication retained for this product is as follows: Adjuvant to the treatment of the authorizations granted for these two products to be placed on the market have a term and validity of three years from the signing of the relevant act,” the ministry said in statement.

The two products to fight against the Coronavirus have proven their effectiveness, authorities said. The first people saved by the traditional medicine brewed by a priest of the Catholic Church had themselves promoted the elixir and word of mouth spread the news like wildfire.

The offices of the prelate at Saint Peter and Paul Cathedral have been swarming with people trying to get hold of the potions.

To satisfy the need, the man of God had delivered large quantities of his products to the Catholic hospitals of the archdiocese of Douala. To benefit from it and free of charge, one simply had to pass a Covid-19 test. This has once again enabled many Cameroonians to be tested as well as treated.

Unable to meet the massive demand, the prelate during a mass had even given the recipe and dosage of his products, allowing each Cameroonian to take personal charge.

One such cured individual, was the governor of the Littoral region Dieudonné Ivaha Diboua, a recipient of the traditional pharmacopoeia made by Monsignor Samuel Kleda.

“The ministry took too long to validate Kleda’s remedy. I do not know why. We have all seen how it has helped people. The government prefers to spend the money for nothing instead of subsidizing it to treat Cameroonians. We should have done this months ago,” said Alain Kemta, a member of the parish of Christ the King of Cite.

“Better late than never,” said his neighbor, “I have always said that Cameroon had the cure for the Coronavirus. Thank you Lord for this miracle. At least we are safe,” he added.

Monsignor Kleda’s products are marketed all over Europe, and containers have been heading to the United States.

The allocation of international funds from the International Monetary Fund (IMF) to manage the pandemic in Cameroon is a daily topic in the local press especially after reports of embezzlement and misappropriation erupted in “Covidgate”.

In April 2021, Human Rights Watch (HRW) demanded that Cameroonian authorities conduct a “credible” investigation. An audit group was set up and a judicial investigation launched in an effort to root out the corruption.

“The lack of transparency and independence of government agencies in Cameroon poses a significant challenge to the credibility of these processes and the respect of procedures,” HRW complained.

Apart from Cameroon, millions of dollars intended for the fight against the virus have “disappeared” in Kenya. In Malawi, high-level officials were arrested for embezzling millions of euros, while in South Africa, the “Covidpreneurs” pocketed millions intended for public health.

In view of this massive vaccination campaign failure, Matshidiso Moeti, the director of the WHO Africa Office, said an increase in Covid-19 cases would be “sobering”.