Data from Ontario, Canada show a pandemic of the vaccinated. Screenshot from Covid-19.ontario.ca
Copenhagen

In Denmark, detailed daily numbers about Covid cases and hospitalizations have been published and they cast a particularly gloomy light on vaccines against SARS-CoV-2, exposing media claims about their "life-saving" and "mitigating" properties as completely false.

The rise in Danish Covid hospitalizations over the last three months predates the outbreak of Omicron. 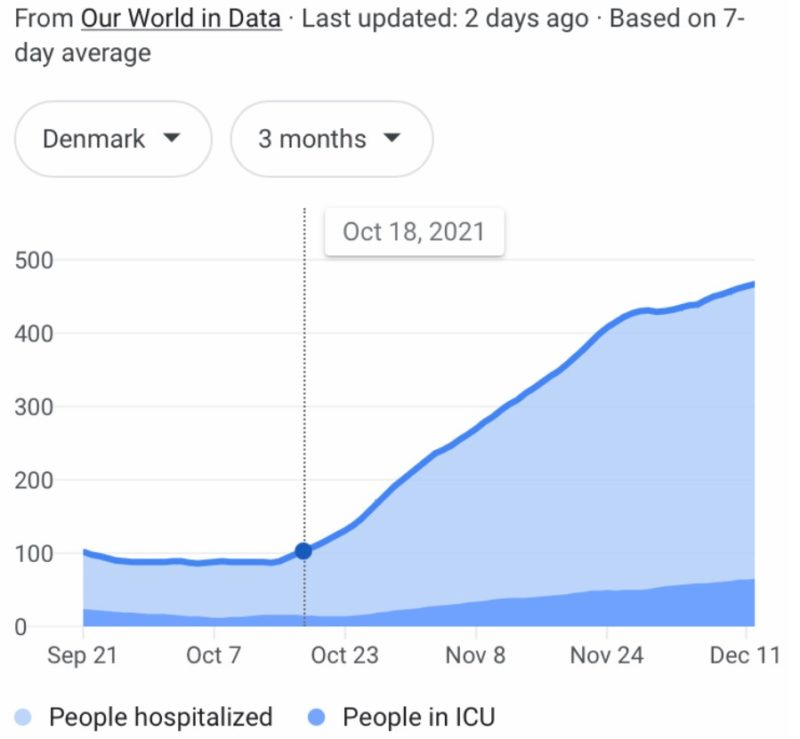 The rise in hospitalizations in Denmark has nothing to do with Omicron. Screenshot from OWD.

And as many astute observers have been suspecting, fear-mongering about the new variant Omicron is being used as a cover for this spectacular failure. Alex Berenson, an honest science reporter pointed out that even though Omicron appears to be significantly less dangerous though more transmissible than earlier variants of Covid, it “has been used as a cover for vaccine failure”.

“Most new Covid cases in Denmark occur in people who are vaccinated or boosted – and that is true for both Omicron and earlier variants. More than 76 percent of non-Omicron Covid infections in Denmark are in vaccinated people, along with about 90 percent of Omicron infections.

“Further, only 25 of the 561 people currently hospitalized in Denmark for Covid have the Omicron variant. The Danes do not provide an exact number for patients in intensive care with Omicron, saying only that it is fewer than five.

“Perhaps the most stunning fact about Omicron and Denmark is that its rise actually parallels a marked slowdown in the growth of Danish hospitalizations and intensive care patients. Those rose roughly fivefold between mid-October and late November, as the Danes left the happy vaccine valley. Since then they have barely budged, rising about 20 percent,” Berenson highlighted.

“The Danish data also show that people with Omicron are both less likely to be hospitalized than those with other variants and released from the hospital much more quickly – in line with what South African health authorities have reported.

“On Friday, for example, the Danes reported that the total number of hospital patients with Omicron since the epidemic began reached 77, up by 20 patients from Thursday.

“Compared to Monday’s report, the trend is even more clear. The number of Omicron cases has roughly tripled, but the number of people hospitalized has barely budged, from 14 to 25.”

Another data analyst has concurred with Berenson’s take on Denmark. “Based on this data, those vaccinated and boosted have between a 26 percent and a 75 percent greater chance than the unvaccinated of contracting Omicron. (Though, at least it’s a little better than the whopping 154 percent increase in risk for the double vaxxed though how durable that proves to be is anyone’s guess…).”

There is no ‘Omicron crisis’ in South Africa

Therefore Danish data on Omicron support statements from South Africa’s health authorities on the variant. The country’s Ministerial Advisory Committee (MAC) this week proposed that tracing and quarantining of contact cases were no longer necessary since the proportion of people with immunity to Covid-19 had risen substantially.

In a memo to Health Minister Joe Phaahla, it said that quarantining of contacts was no longer viable in the current social and economic climate. MAC called for contact tracing to be halted with immediate effect.

“The proportion of people with immunity to Covid-19 (from infection and/or vaccination) has risen substantially, exceeding 60-80 percent in several serosurveys [measuring of antibody levels against infectious diseases].

“We have learned more about the manner in which Covid-19 is spread, and also now have to contend with variants of concern whose epidemiology differs from that of the ancestral strains of SARS-CoV-2.”

The figures out of Denmark underscored that the meteoric rise in cases and hospitalizations point directly to massive vaccine failure.

In Ontario, Canada, the same phenomenon can be seen with infections rising significantly among the vaccinated, Berenson reported. “Assuming these are Omicron cases, there are only two possibilities: The vaccines have now failed completely or Omicron preferentially infects vaccinated people. Or both.”

The example of mask-free, no-mandate Sweden is also telling: It has had the lowest case numbers in northern Europe for months now – ten times less than in Germany and eight times less than in Switzerland measured in terms of population size. The numbers of intensive care patients have also remained comparatively low.

Cases in Iceland have reached a new high, a year after they “hammered” COVID “with science,” and despite 92% of adults being fully vaccinated & 64% having had a booster

In fact, they reported the equivalent of ~225,000 US cases yesterday

Deaths in Vermont — the most heavily vaccinated US state — are the highest they’ve ever been, despite Fauci’s repeated assertions that vaccines would turn COVID “surges” into “blips,” so there can only be one possible explanation — and yes of course it’s Ron DeSantis pic.twitter.com/QVB6HsKaBz

Cases in Australia have shot up to new highs despite one of the world’s highest vaccination rates, incredibly strict mask mandates and forced quarantines

In fact, cases are up 34,644% since the Washington Post said they’d “almost eliminated” COVID with science

And unfortunately deaths in South Korea are also at the highest level they’ve ever been pic.twitter.com/w8AgivbWzu