Policy decisions by the EU are leading to increased energy prices. A leaked strategy report by a large German company, showed how politics and business are deliberately influencing prices on the energy market – to the detriment of end consumers.

The report,  quoted by Austrian weekly Wochenblick, revealed for example that the allocation of Co2 certificates has reached a new level, German nuclear power plants will not be reopened, France’s nuclear power plants are intentionally producing less and the German gas surcharges increase the relevant price for electricity. Of course, the suicide sanctions against Russia are also helping to drive up prices.

In the report it stated: “Coal prices reached a new high at the end of last week shortly after the outbreak of the Ukraine war. The increase was still significantly lower than in the rest of the energy complex. […]”

The price developments shown spike towards the end and indicate yet further price increases. The accompanying text also provided information that falling prices were now a thing of the past.

“Fears of an imminent recession were also reinforced by the warning from the IMF , which attested to the signs of a standstill in the three largest economic areas (USA, China, euro area), […] “increasingly gloomy and uncertain prospects”.

Particular attention to oil and gas 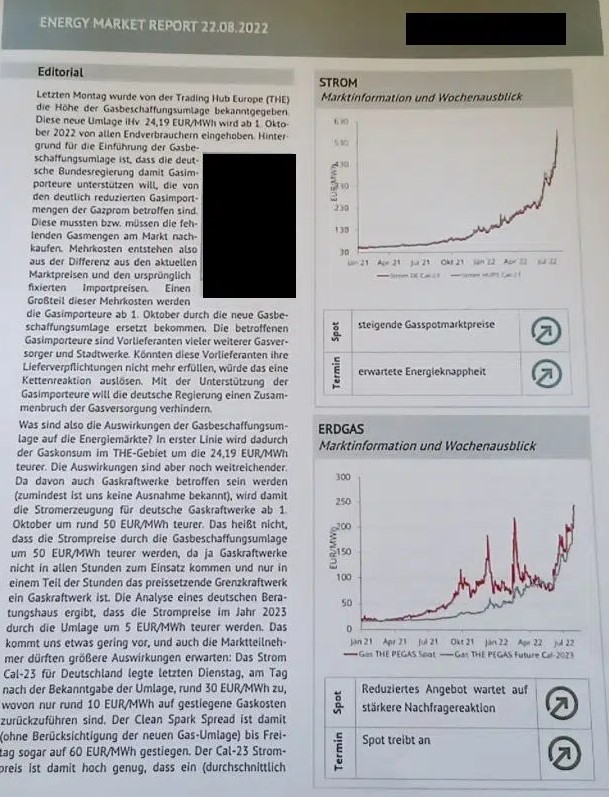 A page from the report showing the spike in energy prices. Screenshot from Wochenblick.

The internal report explained the state of the oil and gas supply. The development over time is particularly interesting: A further increase must be assumed. “The currently stable oil demand in the USA has a bullish influence on oil prices […] as well as the possibility of a partial Chinese economic recovery after the end of the Covid-related lockdown without any opposing production increases.”

Furthermore, it stated: “The market reacted in almost panic again today with the announcement of another complete shutdown of Nord Stream 1 for the end of the month.”

Wochenblick previously reported that the “temporary maintenance” could become a “permanent closure” . There is no mention of the fact that the EU has effectively shut off Russian gas itself through its political sanctions, simply ignoring voters.

Wall Street analysts had expected serious damage from the Western oil embargo in Russia since it is the third largest oil producer in the world. Russia’s economy is correspondingly heavily dependent on energy exports and revenues from the oil and gas sector accounted for around 45 percent of the national budget in 2021. But Russia is not isolated.

The West is pretty much alone with its sanctions policy. It was not “the world” that imposed sanctions on Russia – it was the US, Canada, most EU countries and Australia. South Korea and Taiwan have also joined the previous EU sanctions, and Japan at least partially. But all of Africa, almost all of South America and most of Asia are not participating.

In conclusion, the report soberly outlines the negative development for the end consumer, while energy companies can skim off enormous profits if they had previously managed their stocks with foresight. The report provided clear evidence that the EU’s current suicide sanctions have started an upward spiral in prices with no end in sight.

German Economics Minister Robert Habeck appears not to understand exactly how the electricity market works or perhaps he does and his muddled presentations are done on purpose to hide his intentions. The price of electricity in Germany is always based on the most expensive product at the electricity exchange. So it does not matter how cheap solar or wind energy is. If the most expensive electricity on the market is produced for 1000 euros per megawatt hour, the cheaply produced renewable energies cost the same.

The Chinese Foreign Ministry said in a statement this week that the United States, being the initiator of the situation in Ukraine, is now watching the energy crisis in Europe from the other side, receiving benefits and super profits.

According to Chinese Foreign Ministry spokesman Zhao Lijian, the difference in gas prices in the European and American markets has reached record levels, with the gap in prices already at more than 10 times higher.

According to figures released by Business Insider, US companies could make more than $100 million in windfall profits from each LNG ship to Europe.