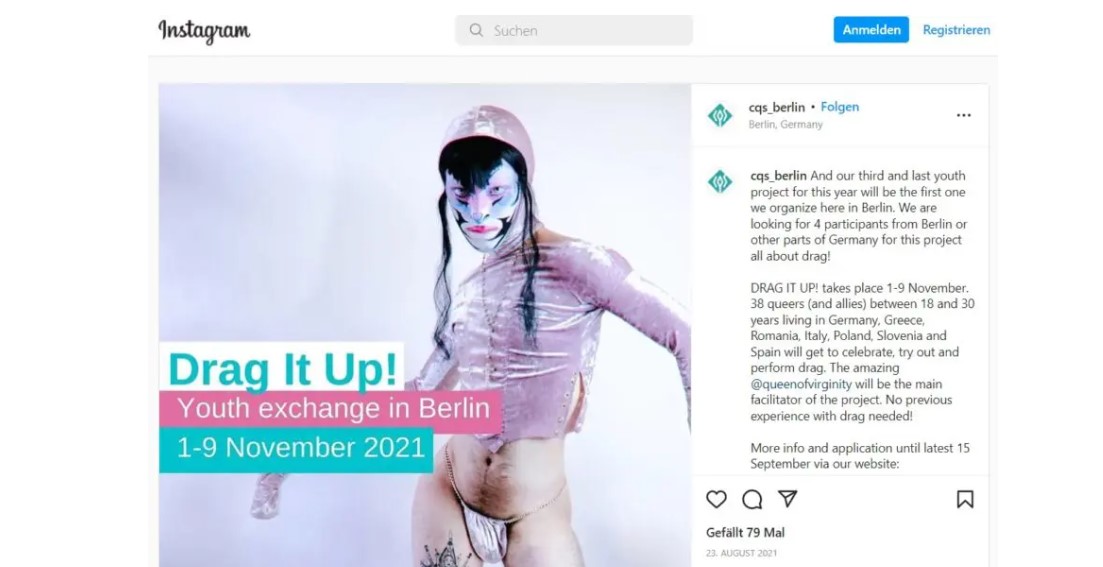 The disturbing promotional image for the “Drag it up” workshop Photo: Screenshot instagram

More than 220 000 euros have flowed from the EU youth program Erasmus+ to so-called "Drag Queen" projects. This is shown by research by the German MEP Nikolaus Fest (AfD).

Erasmus+ is a multi-billion euro EU program to support “education”, youth and sport. Among the many funded projects are several “drag” organizations. “Drag” stands for “dressed as a girl”.

According to publicly available information from Brussels, a “Drag It Up” workshop by a Berlin group was funded with 21 797 euros in tax money. In November 2021, the group Critical Queer Solidarity hosted the “Drag It Up” seminar, which the EU described as a “youth exchange” in Berlin with 38 participants aged between 18 and 30.

The promotional image for the event shows a half-dressed, made-up man in a lascivious pose.

The European Commission apparently sees this as an educational project worthy of funding. It explained that it promoted “Drag It Up” to increase “the self-confidence of young queer people”. It wanted to “empower them to become artists and performers”. To this end, the seminar would teach them how to “wear makeup and wigs, walk in high heels and other methods of blurring traditional binary gender roles”.

According to the prospectus, the participants in the seminar were able to “get to know the rich and diverse drag and queer scene in Berlin,” according to the EU’s description.

The news site Breitbart London was the first English-language medium to report on the promotion of the various “drag” groups on Saturday. However, MP Nikolaus Fest, head of the AfD delegation in the European Parliament, has been researching this for years.

He criticized the use of EU funds speaking to Breitbart in no uncertain terms. “This is a waste of taxpayers’ money.” The EU throws away taxpayers’ money “for lipstick courses and lace underwear for men”. In doing so, it showed that it was “following a woke agenda no matter what”. The AfD politician spoke of an EU-financed culture war against traditional gender roles.

The list of EU-funded “Drag” projects that he created, is surprisingly long. In 2021, for example, the EU subsidized a “Beyond Gender Summer Camp” near Göttingen with 62 690 euros. In an academy, 75 participants – namely “trans*, inter*, non-binary and gender-questioning young people” – were supposed to come together for a one-week summer camp.

In Spain and Slovenia, Erasmus+ also supported various “drag queen” and LGBTQ projects. The EU paid 24 597 euros to the LGBTQ group “Dragtivism” for seminars in Barcelona and Girona and 21 770 euros to the Slovenian “United with Pride” project, which also featured “drag queens”.

The EU Commission is financing the project for “LGBTQ-friendly schools throughout Europe” with 434 000 euros. A project funded by Erasmus+ with almost 135 000 euros was allotted to better care for “queer migrants”.

Fest also complained that the EU promoted children’s books about “adventures of gay kangaroos”, although this is a violation of the EU treaties, because questions of bringing up children are a matter for the member states, not the EU.