Three years in prison for stating a man can’t be a mother?

Norwegian prosecutors are investigating "hateful" tweets by feminist Christina Ellingsen directed at a man claiming to be a lesbian woman. If convicted, Ellingsen faces up to three years in prison.

“You are a man. You can’t be a mother,” feminist Christina Ellingsen said on Norwegian national television. She was responding to comments made by “Christine Marie” Jentoft, representative of the trans activist group Foreningen FRI. As CNE News reported, Jentoft is a biological male who identifies as a lesbian.

Amnesty International Norway accused Ellingsen of “harassment” because of this. Ellingsen tweeted: “Normalising the idea that men can be mothers is a defined form of discrimination against women.”

Ellingsen wanted to know why the FRI was teaching young people that men can be lesbians. “Isn’t this conversion therapy?” said Ellingsen. She later wrote how “crazy” the FRI was, an “organisation that supposedly protects the interests of young lesbians”.

Now the Norwegian Public Prosecutor’s Office is investigating Ellingsen. The charge: hate speech. In the worst case, she faces three years in prison. According to CNE News, the accusation has to do with the fact that the concept of gender identity was added to the Norwegian law paragraphs on insult and hate crimes in January 2021.

The fact that the police are legally able to investigate and prosecute women who advocate for women’s rights is worrying, Ellingsen explained: “This is new territory in Norway, so the outcome of the investigation is important.”

According to her, women in Norway are not protected against so-called hate speech. “But men who claim to be both lesbian and a woman are protected on the basis of both their gender identity and their sexual orientation,” Ellingsen notes.

In an interview with Tucker Carlson on Fox News, Ellingsen said that she had received a lot of support from different quarters, but also a lot of criticism. She was accused of calling for genocide, being a fascist and a Maoist. Ellingsen was not surprised by the invective, saying it was to be expected. 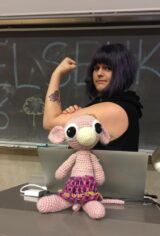 This Jentoft character is evidently neither a woman nor a mother judging by the choice of toys and the manly pose. But calling out this ridiculous bluff has become punishable. Facebook

Previously, she had been sympathetic towards radical feminism, Ellingsen explained. She also used to vote for the left. Now, on the other hand, she is much more critical of what they actually say. Ellingsen concludes: “All parties in Norway support this pseudoscience”.

CNE News reported that in 2021 a Norwegian man was already convicted of “insulting” and “misgendering” a transgender male on Facebook. He was sentenced to 21 days in prison and a fine of around 1500 euros.

A similar ban on “hate speech” is also being devised in the Netherlands to protect gender identity from “insults”, according to CNE News. The issue is also being discussed at the European level. At the end of 2021, the European Commission proposed to add hate speech to the existing list of “EU crimes”. A decision on this is to be taken soon in Luxembourg. According to Bas Tichelaar, director of CitizenGo in the Netherlands, it is “… a tactic of the radical left to censor any criticism of their ideas worldwide. By changing the definition of freedom of speech, freedom of expression is endangered. When it is suppressed, the system of government turns into a totalitarian tyranny.”

CitizenGO launched a petition in the beginning to stand up for freedom of expression in Europe. “We see more and more how laws against hate speech can be misused to persecute people with a different opinion,” Tichelaar said.

Another major problem is the lack of a clear definition of alleged hate speech and hate crimes.