At Humboldt University in Berlin, police officers sat in squad cars in front of the large entrance on Dorotheenstraße. Invitees waited patiently to have their bags checked by university staff inside the building. A doctoral student who is actually researching fish, got entangled in the gender debate.

Dangerous objects, bottles and large backpacks were prohibited. Only after passing a security check were those who had previously registered via the internet allowed into the lecture hall on the third floor. The reason: a biology lecture.

Marie-Luise Vollbrecht, a doctoral student in the subject, made it clear from the start that she would not answer any questions from either the audience or the press. Vollbrecht’s central thesis is that in humans there are only two sexes and it remains so for life.

Already on 2 July, Vollbrecht gave a lecture with the title: “Geschlecht ist nicht (Ge)schlecht: “Sex, Gender und warum es zwei Geschlechter gibt in der Biologie” [Gender is not bad: Sex, Gender and why there are two genders in biology]. But the radical left-wing group “Arbeitskreis kritischer Jurist*innen an der Humboldt-Universität zu Berlin” agitated to have the lecture cancelled claiming that “queer and trans*-hostile ideologies” should not be offered a stage at the institution.

The university immediately stepped in and cancelled the lecture. “We very much regret that Ms Vollbrecht cannot give the lecture,” Birgit Mangelsdorf, the university’s head of communications, told Welt am Sonntag a fortnight ago. She added that the decision was purely for security reasons.

But this cancellation caused enormous outrage. The accusation of transphobia was not justified at all, it was said, for example, in a statement by the Network for Academic Freedom. Bodies like the student councils openly try to “expel academics and end their careers because of their views”.

The terror campaign organised by left-wing radicals, queers and trans activists with the aim of silencing Vollbrecht, backfired. Vollbrecht gave her lecture after all – on YouTube. It can still be viewed and so far it has been viewed more than 120 000 times, whereas maybe only a 100 people would have been present to listen to her lecture in person.

The university then back-peddled: instead of cancelling the lecture, it rescheduled it for this week, but there was a small catch. After the lecture, they had organised a panel discussion. The panel included an economist, the Education Minister Bettina Stark-Watzinger, HU President Prof. Dr. Peter Frensch who is a psychologist, Prof. Dr. Martin Heger who is a lawyer and Professor Dr. Kerstin Palm who is a biologist specialising in “gender” and “science”. Stark-Watzinger expressed concern about Vollbrecht endangering “the freedom of science”. 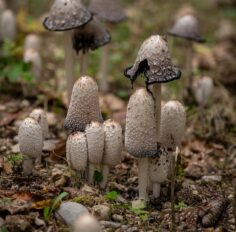 Transgenders cite Coprinus comatus, the shaggy ink cap mushroom or Tintling, as a reason for confusing gender in humans. Wikipedia

The minister had clearly missed the opportunity to speak out for freedom of speech and oppose “cancel culture” in science.

Because Vollbrecht maintains that biologically there are only two genders, that was “transphobic” and the university should not offer such “alleged facts” a platform, her detractors said. They added: “There are mushrooms that have hundreds of genders, the shaggy Tintling has a thousand genders.” But someone in the audience at the panel discussion responded: “People are not mushrooms!”

Heiner Schulze, who is from the “Gay Museum” in Berlin, Jenny Wilken from the German Society for Transidentity and Intersexuality, were also invited and the moderator was Jan-Martin Wiarda, science journalist for the far-left rags Tagesspiegel and Die Zeit. “It’s not the case that Marie-Luise Vollbrecht is an innocent scientist,” Schulze complained since her thesis was based on “old, right-wing, right-wing extremist narratives”.

It became quite clear why Vollbrecht was not interested in a “debate” which would have resulted in a public mobbing. She justified her cancellation as follows: “The panel is unbalanced in its composition.” Moreover, with so many participants, not everyone would get enough time to express themselves.

The biologist came up with a better idea. Vollbrecht instead decided to discuss the topics of gender and “cancel culture” with informed guests on social media.