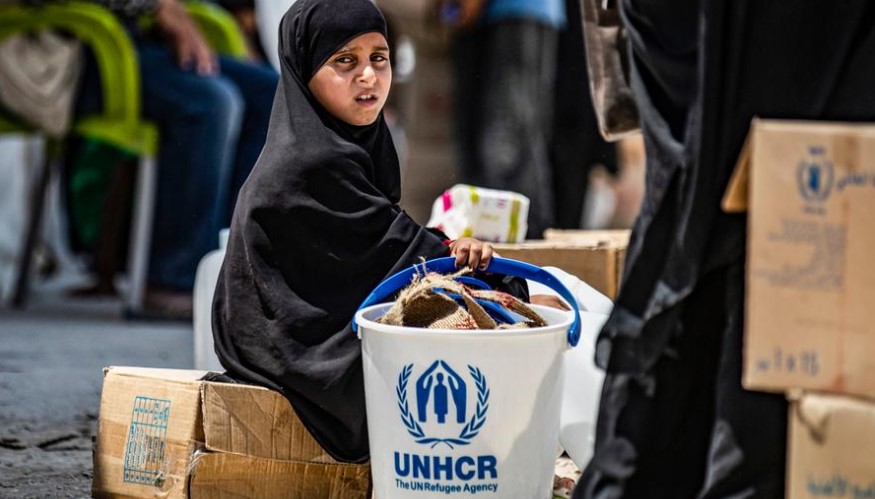 Feeding a stalemate in Syria

The UN Security Council has agreed to extend a system for cross-border aid to Idlib, Syria until January 2023. The US and its allies had demanded a year-long extension, but Russia used its veto on Friday.

UN and other NGO aid delivery trucks will cross from Turkey into Syria at the Bab al Hawa crossing. The system has been in place since 2014, but expired on Sunday.

At stake are daily supplies for about 2 million people in the northwestern Idlib region of Syria. According to the UN’s Office for the Coordination of Humanitarian Affairs, more than 4600 aid trucks, carrying mostly food, have crossed Bab al Hawa this year.

Dmitry Polyanski, Russia’s deputy ambassador to the UN, said Moscow would adopt the resolution with “a minimal modification.” At least nine of the 15 members must support a resolution to be adopted, and none of the permanent members can use their veto.

Turkish President Recep Tayyip Erdogan had emphasized the importance of extending the cross-border aid mechanism in Syria, in a conversation with his Russian counterpart Vladimir Putin on Monday.

Since 2019, Russia has argued that the UN should work with Damascus on aid deliveries out of respect for Syria’s sovereignty. Moscow and Ankara signed a ceasefire agreement covering Idlib in 2019; however, Turkey has failed to uphold its end of the bargain.

The original UN mandate for cross-border aid to Syria in 2014 was devised thinking that rebel-controlled areas were temporary, but the situation in Idlib continues to exist in a stalemate, with no clear military or political resolution on the horizon.

Heated debates in late 2019 and mid-2020, during which Russia and China used their vetoes three times to block resolutions renewing the mandate, saw Moscow succeed in limiting the UN’s cross-border operations to a single crossing, at Bab al-Hawa, and Russia made clear that the mandate could not be renewed indefinitely.

Russia also demanded that the UN work harder on delivering aid into Idlib from government-held Syrian territory, and called for greater international funding for recovery projects in government-controlled parts of Syria.

The UN Office for the Coordination of Humanitarian Affairs (OCHA) in particular has played a pivotal role in cross-border aid delivery.

In 2014, Serena Shim, an American journalist was killed in Turkey just one day after she broadcast that the Turkish intelligence agency had threatened her and accused her of spying.

This accusation followed her original investigative reporting at the Turkish border of Syria in which she observed Islamic State terrorists crossing into Syria inside UN food trucks.

The terrorists and their weapons were flooding from Turkey into Syria through a US CIA program which President Trump cut off in 2017.

The US and its western allies have demonized Russia over the current Ukraine conflict. However, the work that Russia is doing in Syria should not be conflated with Ukraine, as they are not connected.

The Russian Center for Negotiations in Syria has been responsible for brokering peace deals between armed terrorists and the Syrian government. This has led to the peaceful resolution on conflicts across the country, and terrorists and their families and supporters were given the option of surrender or being bussed to Idlib.

The population today in Idlib is not the original civilians, who were mainly olive growers, but is displaced people coming from locations far removed from Idlib. The common denominator of the majority of inhabitants in Idlib is their political ideology which is Radical Islam. The various ‘rebel’ groups from the outset of 2011, have been aiming for an Islamic State in Syria. Freedom and democracy is not their goal.

The Free Syrian Army ceased to exist and Jibhat al-Nusra became the fiercest fighting force on the battlefields by 2015, and was the Al Qaeda affiliate in Syria. Because Jibhat al-Nusra is designated an outlawed terrorist organization by the US and UN, they changed their name to Hayat Tahrir al-Sham (HTS) in an effort to clean up their image and keep US-EU support.

The HTS-backed ‘Salvation Government’ administers Idlib and rules with an iron fist. HTS, Al Qaeda, ISIS and the Muslim Brotherhood all have the same political platform: to establish an Islamic State, with the Koran as the only rule of law.

Idlib is just one small province in Syria, and most of the Syrian civilians in Aleppo, Homs, Latakia and Damascus don’t receive UN aid, or any charity aid. This has led to a deep-seated resentment of the majority of Syrians, who are suffering from lack of electricity, lack of gasoline, and hyper-inflationary prices of basic food items, directed at the people living in Idlib who are living off free food and supplies.

In 2010, the Christian Science Monitor published an article “Syrian Secularism: a Model for the Middle East”.

Syria is a mixed population of Jews, Christians and Muslims. The peaceful coexistence was maintained by the Syrian government embracing all religions and taking pride in a diverse heritage.

When the US-NATO attack on Syria began in 2011, they used Radical Islamic terrorists as foot soldiers, but their regime change goal was a failure because the Syrian population fought back against Radical Islam. The Syrian people were determined to maintain their secular system.

Before 2011, about 10,000 Christians lived in the Idlib province, but their numbers started to decline in 2012, and by 2015 most of them had fled the Radical Islamic terrorists in control. Today, only about 200 Christians remain and are elderly.

In late January 2013, the Christian village of Al-Yacoubiyah in Idlib was captured by terrorists.

Between 2015-2018, up to 95 percent of Al-Yacoubiyah emigrated, as HTS took control and properties of the Christians were seized, churches were locked up and Christian people were denied to perform their religious rituals, church bells were prevented to ring and crosses were not allowed to be hung on churches. HTS even takes 2.5% of the farmers crops per year as a tax on ‘heathens’, which HTS considers all Christians.

The US, EU and NATO have turned their backs on Syria and are involved with Ukraine. Experts have asked, “Who benefits from starving people in Idlib?”

Apparently, the US and its allies benefit from keeping the Idlib population as hostages to a political process which has no roadmap or movement. Instead of convening a meeting of nations to solve the stalemate in Idlib, and free the civilians from an Islamic State in Idlib, the UN only haggles about how to deliver aid, to feed the stalemate.