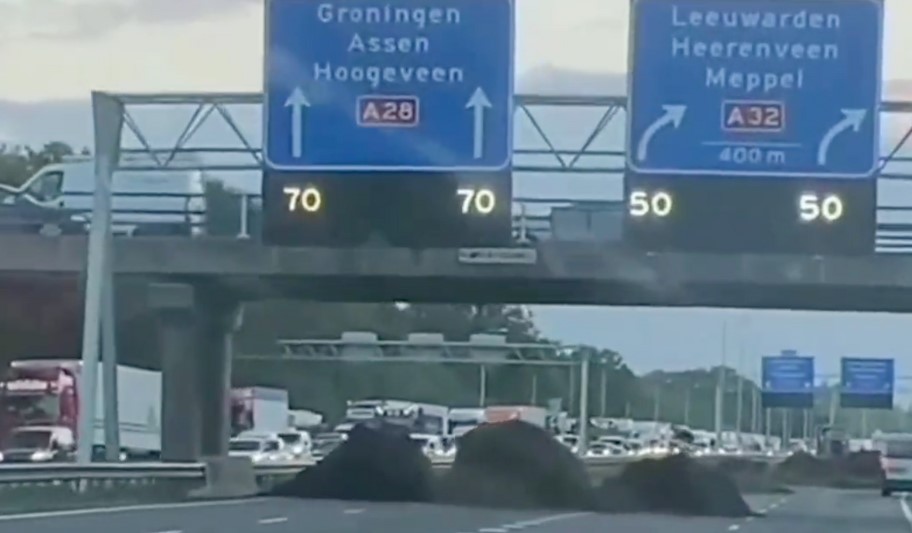 Roads and highways in north Holland blocked off by dumping manure. Screenshot from Twitter

Dutch farmers have not given up on their fight against the globalist Rutte IV cabinet. They have been blocking roads against the upcoming expropriations of farmers.

This week, the A7 between Groningen and Drachten and between Middenmeer and Abbekerk in North Holland and on the A1 at Voorst were shut down. Road traffic had to take into account delays and nuisance due to clean-up work. On the A7 near Frieschepalen, there was an accident involving several vehicles due to waste dumping. As a result, the police have decided to close the on and off ramps there. No one was injured in the accident. The A7 in the direction of Heerenveen was also closed at the Oude Riet service area, because there was waste in two lanes.

The farmers in West Friesland certainly know how to get things done. Part of the A7 was closed there. At Medemblik, between Middenmeer and Abbekerk, the road was even closed on both sides. Hay bales and car tires were dumped on and along the road and set on fire. “The firefighting work is in full swing. The road is expected to be reopened around 8 am,” the local emergency services told Dutch daily De Telegraaf.

Municipalities had to struggle to find a pro-Rutte IV contractor to clean up all the waste dumped in protest during the night from Wednesday to Thursday. The previous contractors who were initially asked to clean the roads had refused, either because they support the farmers’ actions or because they feared threats and intimidation.