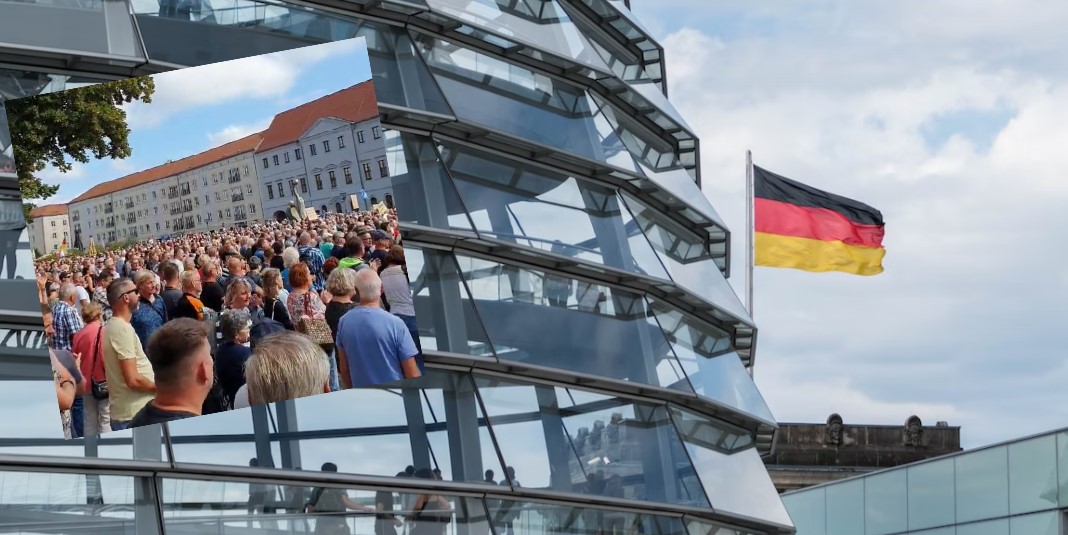 The District Craftsmen's Association of Anhalt Dessau-Roßlau in Germany held a mass rally on the market square in Dessau on Sunday under the motto "No arms deliveries to Ukraine! Peace instead of war!" The participants wanted to send a signal against war as well as sanctions and for peace.

On August 28, the Dessau-Roßlau District Craftsmen’s Association mobilized for a mass rally on the market square in Dessau. The motto of the event was: “No arms deliveries to Ukraine! Peace instead of war!” Above all, the sanctions packages that the EU has imposed on Russia since February 2022 were discussed. However, the organizers of the rally pointed out that the punitive measures would exacerbate the conflict, which politicians completely neglected. Furthermore, it is ignored that the sanctions harmed the citizens of Germany more than Russia.

Karl Krökel, district master craftsman from Dessau-Rosßlau, spoke at the beginning of the event. He said that artisans and citizens have grave concerns. Concerns about massive damage to the German economy, which is accompanied by mass unemployment, and worried that citizens would no longer be able to pay their gas and electricity bills and their livelihoods.

“What we are experiencing is an energy policy disaster! And the government alone is responsible for this disaster!”

Krökel therefore demanded that the government sign sensible energy contracts and not set spiraling sanctions in motion. That’s why they turned to the public in an open letter. In this, the craftsmen noted that the Ukraine conflict could not be solved militarily. Despite the sanctions, Russia continues to benefit from the sale of oil and gas. For example, private refineries in India, which buy cheap oil from Russia, supply the world market with oil, “while the PCK refinery in Schwedt is on the brink of collapse”.

According to Krökel, the government destroyed the energy supply for the population and the economy. The consequences of the sanctions and the Ukraine war are burdening citizens with immense inflation, explained Krökel.

“We were deliberately placed in an energy emergency. There was no impact assessment of the consequences of unilaterally cutting off all energy supplies from Russia.”

Sanctions should not harm Germans

However, the federal government is in no way obliged to enforce sanctions that harm its own population. However, this means that the interests of other countries are valued more highly than those of their own people.

“How is it possible for elderly citizens in homes or at home to be prepared to be cold in the coming winter?”

For example, those craftsmen who ask themselves whether arms deliveries to Ukraine would only prolong the war, are defamed as a “Putin’s friend” who slavishly follows the “Russian narrative”. A respectful discourse was no longer possible.

“You have to reproach this federal government with all severity for saying in March: ‘No problem, we are prepared for everything. No matter what Mr. Putin tries, the [gas] supply is secured.’ That’s clearly not the case. People are afraid in this country and that can’t be right.”

Reiner Braun, President of the International Permanent Peace Bureau, called for peace in Ukraine and peace worldwide. Citizens who are committed to peace, however, need courage, because everyone who is working towards peace will end up being defamed.

“What kind of madness are we living in? We’re waging an economic war against Russia that hurts us more than Russia,” said Braun. He further explained that anyone was against a war that violated international law – and thus also against wars waged by the US. However, the United States has never been sanctioned.

Braun acerbically recalled that German foreign policy was committed to a certain morality. “Moral about the butchers of Saudi Arabia. Moral about the breaches of international law in Morocco. Morality about the exploiters and oppressors of Qatar. What kind of miserable double standard is that that our government sells as politics?”

It was therefore necessary to end this war and return to negotiations. It is also crazy that the government was upgrading the Bundeswehr for 100 billion euros while the money is needed more urgently elsewhere. There is an urgent need to return to Willy Brandt’s policy, which focuses on negotiations.

Michael Müller (SPD), former State Secretary in the Federal Ministry for the Environment and German Minister from 1983 to 2009, said in his speech that the war had a history. “The war is above all the result of a broken promise.”

With this, Müller was referring to the eastward expansion of NATO after the collapse of the Soviet Union.

In addition, the rearmament of Germany and the West is barbarism that cannot be justified by anything. Müller also criticized Robert Habeck, who always wanted to act as if he were sorry after his decisions, and then explained that it was just the way it was.

Müller called for a return to a policy of detente. There should be no war, especially not today, since there is always the danger of nuclear war.