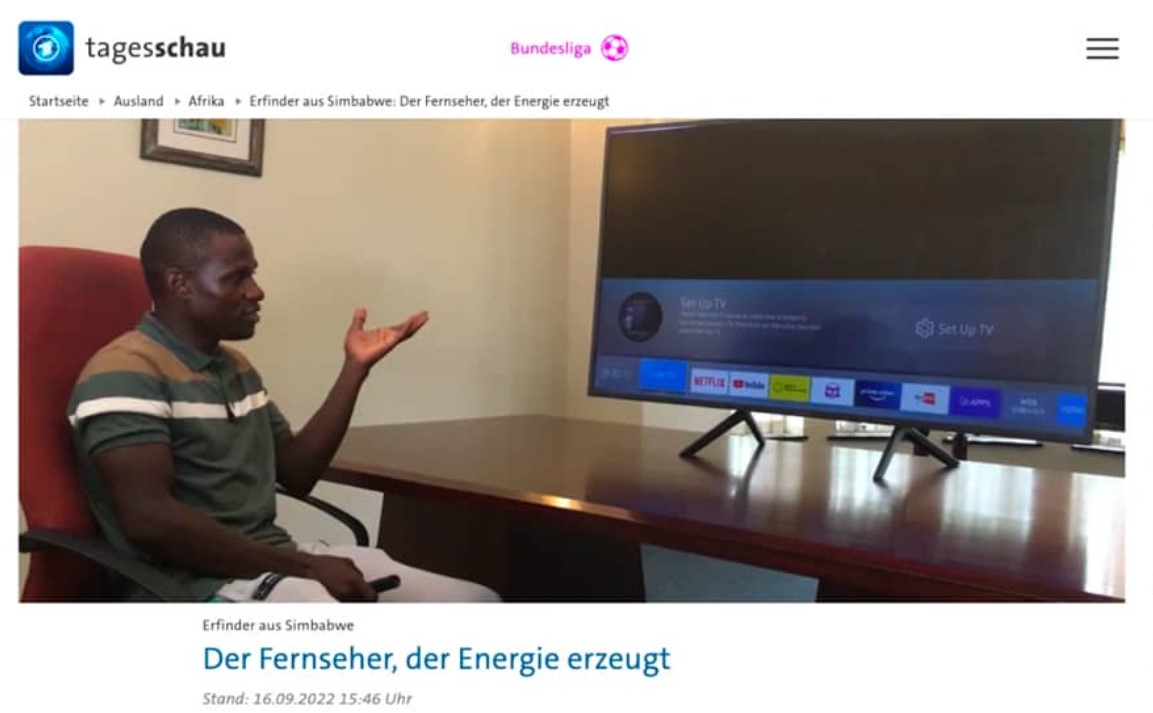 The abysmally stupid journalists at Germany's state broadcaster (which runs on compulsory fees), were exposed once again on Friday. The reporter from ARD in Johannesburg presented a sensational contribution with a “television that generates energy instead of consuming it”.

The TV is powered by radio waves, so it doesn’t need a power cable. And not only that: “Even if the television is off, other things can be supplied with electricity through it”. The TV is turned into a “microsonic device that generates energy”. The ignorant reporter even welcomed it as “part of the solution to the energy crisis”.

The inventor of this miracle box is said to be a Zimbabwean. The leftwing Tagesschau announced the discovery of the incredible technological break-through.

Meanwhile, on Twitter, the reporter from the ARD Johannesburg studio promoted her ridiculous contribution with the words: “No cable, no extra radiation, no emissions, no raw material consumption. Sounds like part of the solution to the energy crisis.”

The problem: If it sounds too good to be true, it probably is.

Maxwell Chikumbutso is no stranger to the world: Years ago, he presented an electric car that allegedly does not need to be charged because it is powered by magnetic waves and radio frequencies, even offering it for sale on a website for $499. The news agency AP and some honest reporters at the time, exposed the “sensation” as African fakery.

The Tagesschau reporter did not bother to check the credentials of the “great scientist”. And no one else in the Tagesschau editorial office was perplexed by this “scientific sensation” before it went online.

In the report, the Tagesschau actually advances the narrative that the great Zimbabwe invention only failed to catch on because of racism. It has Chikumbutso, the supposed inventor, explain at length: “In a way, the television uses free, renewable and green energy. No emissions, no consumption, no raw materials. It uses the radio waves and converts them”.

But unfortunately, even if the “invention could set a precedent, there is little attention for innovations from southern Africa”, the author lamented. And further: “His ideas could be a big hit. And yet he is not even listened to in large parts of Europe”.

The miracle television could solve so many problems in Africa and around the world, but racism has been preventing us from advancing, according to the Tagesschau. Chikumbutso wants to “make his cordless TV (…) accessible to the rural population”. And further: “Scientists from Europe have not yet tested his invention. But Maxwell believes it would be quite attractive to the Western world, including Germany, for example.”

In fact, Chikumbutso has already invented something else: “Street lights that are no longer solar-powered, but are powered by radio waves – also an invention of Chikumbutso. They are already shining in Mexico and North America.”

Deutsche Welle (not financed by the broadcasting license fee, but by taxes) also took over the contribution and moderated it with the words: “This is a great idea that is already being implemented. But it hasn’t caught on yet. The inventor complains that this also has to do with a large portion of racism.”

Within hours after her post went online, an avalanche of ridicule and criticism followed. The Tagesschau author then admitted on Twitter: “Despite all my enquiries, I have not been able to get in touch with scientists from the US who, according to Maxwell Chikumbutso, have tested and verified his alleged invention. He wants to have developed it, he claims. That’s how I should have put it in the tweet.”

By late Friday evening, the article was no longer available on the Tagesschau website. The author of the article comes from Südwestrundfunk (SWR; Southwest Broadcasting), a regional German public broadcasting corporation, the institution that will now provide the new head of ARD.