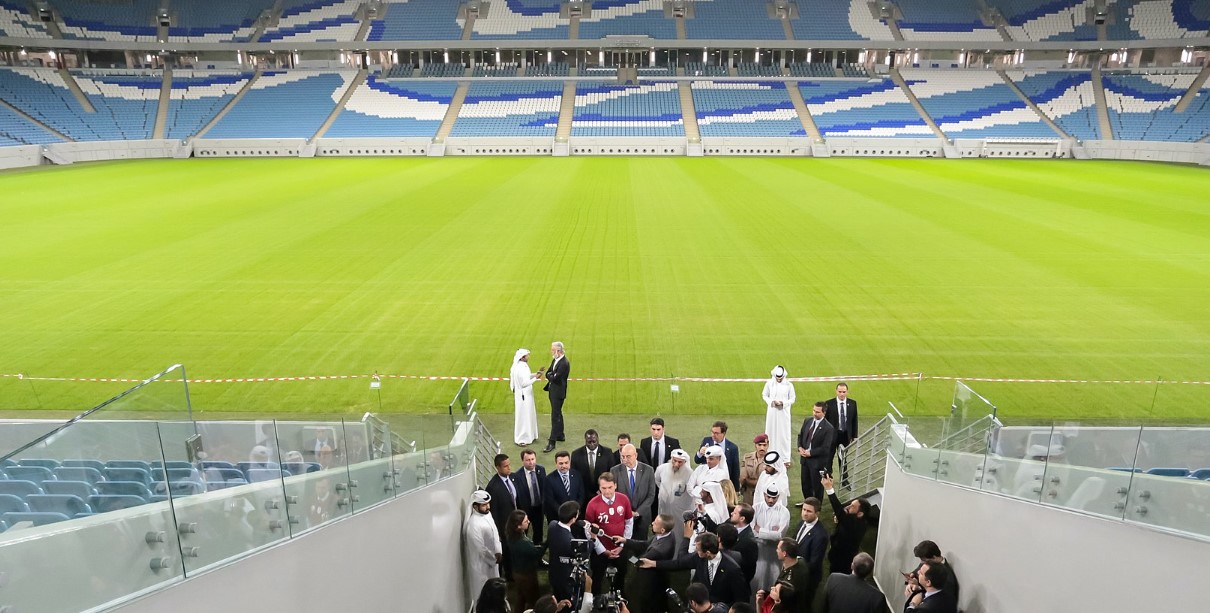 President of the Republic, Jair Bolsonaro visited one of Qatar's stadiums. Wikipedia

The 2022 FIFA World Cup is about to open in November in the Islamic principality of Qatar in the oil-rich Persian Gulf. There have been continuing attacks on the government of Qatar from the beginning of the announcement that the tiny nation had been awarded the opportunity to be the first Arab nation to host the 2022 World Cup.

The complaints against Qatar have focused on human rights abuses of the migrant workers who have built and maintained the infrastructure in Doha, and the lack of rights for the LBGT community.

While football is a globally watched game, and the 2022 World Cup is a month-long tournament played by global players, not every nation has identical values, customs, or laws. Western nations may speak about diversity and inclusivity, but they are demanding that their values are ‘one-size-fits-all’. The Middle East is an older civilization than the west, is conservative, and Islam is at the center of the values and traditions. The 2022 World Cup is going to be either a clash of civilizations or a learning experience for western and other participants.

Qatar recently summoned German ambassador Claudius Fischbach over remarks made by the Minister of the Interior of the Federal Republic of Germany, Nancy Faeser.

Speaking to German broadcaster ARD, Faeser had questioned whether Qatar should have been granted the right to host the 2022 World Cup.

“There are criteria that must be adhered to and it would be better than tournaments are not awarded to such states,” Faeser was quoted as saying.

H. E. Dr. Nayef Falah M. Al Hajraf, Secretary General of the Gulf Cooperation Council (GCC), denounced the statements made by Faeser. Al Hajraf praised the pioneering role of Qatar in hosting the 2022 World Cup, and in communication and understanding among nations.

“The memo also stressed that the State of Qatar is determined to organize one of the best editions to showcase the region’s civilization and heritage to the whole world,” the Qatari government said concerning the complaint handed to the German ambassador.

Faeser is due to visit Doha next week, which could make for a strained welcome for the diplomat, after making her highly undiplomatic comments.

Qatar has faced criticism from the West concerning its treatment of migrant workers who are often from Africa and Asia. The Guardian reported in 2021 that 6,500 migrant laborers had died in Qatar since the awarding of the 2022 World Cup rights by FIFA. The report did not prove a direct link between the deaths and the building of the World Cup structures, and Qatar has made improvements in conditions for workers.

On October 29, more than a dozen buildings were evacuated and shut down by officials in the downtown Doha section where football fans will stay. The mainly African and Asian residents were forced to sleep outside on the pavement because they only had two hours notice of the eviction from one such building housing 1200 people in the Al Mansoura district. Some men were out working at the time and came home to find locked doors and no way to retrieve their belongings inside.

FIFA did not respond to requests for comment about the evictions.

Ada Colau, the mayor of Barcelona, Spain said her city does not support holding the 2022 World Cup in Qatar and will not be offering any public viewing to watch the Spanish team play.

Media coverage of the World Cup

Qatar’s supreme committee has denied imposing restrictions on media freedoms during the tournament but had issued directives that “residential properties, private businesses, and industrial zones” or government, educational, health, and religious buildings were off-limit to filming.

Qatar has a history of jailing journalists for reporting on issues deemed sensitive by the authorities. A group of BBC reporters was arrested in 2015 in Doha and spent two nights in prison while investigating housing conditions for migrant workers. Two Norwegian journalists investigating conditions for migrant laborers working on World Cup venues were arrested last November and detained for 36 hours as they tried to leave the country.

Some of the restrictions imposed by Qatari officials are focused on preventing western media from filming inside migrant residences, and even hospitals. Qatar is image conscience and wants to avoid any disappointing views being shown abroad. There is a law against misinformation being spread online.

2022 World Cup organizers have said gay fans will be welcome for the tournament, despite strict local laws against homosexuality.

Qatar is an Islamic country with an authoritarian system of government. Swearing, public displays of affection, and dressing immodestly are seen as offensive. Homosexual behavior is illegal. Posting material that appears to insult, slander or is culturally insensitive may also be considered a crime, according to travel advice from the UK government.

Recently, Qatar has taken the LGBT complaints seriously and has attempted to convince visitors that it is safe and tolerant, saying that gay fans can display affection during the 2022 World cup, and the sale of alcohol at stadiums is allowed.

However, there are western LGBT fan groups who have decided to boycott the event. Homosexuality is illegal in Qatar and Muslims face the death penalty if prosecuted for it. Recently, veteran activist Peter Tatchell said he was arrested after he staged the country’s first LGBT protest to draw attention to human rights abuses.

“I think for some people dissatisfaction with FIFA’s decision goes as far as the decision not to watch the World Cup on TV as a statement of principle,” said Fearn.

On October 26, UK Foreign Secretary James Cleverly commented to the media that LGBT football fans traveling to Qatar should be “respectful of the host country”. Cleverly was voicing a long-held view on diplomatic behavior among nations.

The Australian national football team, Socceroos, denounced the ill-treatment of migrant workers and the criminalization of LGBT people in Qatar. The team is due to be among the 32 nations competing at the 2022 World Cup, and they demanded an improvement on human rights in a video they produced.

“There are universal values that should define football – values such as respect, dignity, trust, and courage,” the players said. “When we represent our nation, we aspire to embody these values.”

The team used the term ‘reform’ in the video, and this is very problematic. The issue of LGBT rights runs counter to Islam. To attempt to ‘reform’ Islam to mirror western values would be impossible. The question is whether the west can accept that there are differences in values around the world.

On September 8, Kenya’s President-elect William Ruto was interviewed by Christiane Amanpour on CNN.

Amanpour quizzed Ruto on human rights, particularly his previous comments that there was “no room” for homosexuality in Kenyan society.

“I am very clear that we respect everybody and what they believe in, but we also have what we believe in and we expect to be respected for what we believe in,” said Ruto, who said he does not think that LGBTQ rights are an important topic for Kenyans.

“We do not want to create a mountain out of a molehill,” he said, adding that he prefers to focus his efforts on unemployment and hunger. “When it becomes a big issue for the people of Kenya, the people of Kenya will make a choice.”

Kenya’s laws against same-sex relations were put in place by the British colonizers in the late 19th century. Kenya’s penal code criminalizes “carnal knowledge against the order of nature.” Anyone found engaging in same-sex relationships could face up to 14 years in prison.