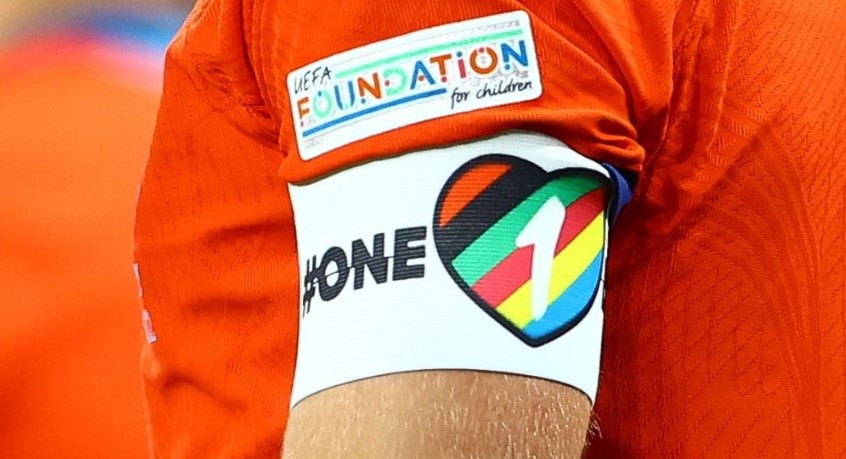 The OneLove campaign is aimed at children. Photo supplied

In the run-up to the World Cup in Qatar, most soccer officials have jumped on the woke wagon, but some teams have refused to join.

The obtrusive LGBTQ propaganda, also aimed at children, does not meet with sympathy everywhere. The French goalkeeper and team captain Hugo Lloris, for example, made his reasons clear at a press conference when he explained that he would not wear a rainbow armband at the World Cup in Qatar. He said: “When we welcome strangers back home in France, we expect them to abide by our rules and respect our culture. I will do exactly the same thing in Qatar, it’s as simple as that.”

FIFA will sport their own captain’s armbands for the World Cup in what appears to be a response to the OneLove armband message proposed by European nations.

England and Wales captains, Harry Kane and Gareth Bale, said they would defy the football body by sticking to their decision to wear the OneLove rainbow armbands during their World Cup matches.

German national player Leon Goretzka from Bayern Munich also announced on ZDF that they wanted to set an example which should be “as visible as possible”. His captain, goalkeeper Manuel Neuer (also Bayern Munich), announced that he would be playing with a rainbow armband in Qatar.

The OneLove campaign with an extended rainbow armband comes from UEFA. The captains of all participating national teams were asked by the association to wear the OneLove armband. The Americans instead changed their logo from red and blue to represent the LGBTQ community colours.

FIFA has proposed that captains wear a different armband to support social causes such as “Football unites the world”, “Share the meal”, and “Bring the moves”.