The Trinity test of the Manhattan Project was the first detonation of a nuclear weapon. Wikipedia
Kiev

Although his closest allies, the US and Poland, are certain that one of his rockets hit the Polish village, Ukraine's President Vladimir Zelensky insisted until Wednesday that his neighbour was the culprit. He has so far refused to apologize for the attack that killed two Polish citizens and destroyed a tractor.

On Wednesday, Zelensky claimed that he was “certain” the rocket was not a Ukrainian projectile. First of all, Russia was blamed. But both Poland (which initially also decided to advance the idea of a Russian attack) and the US know that it was a Ukrainian anti-aircraft missile. Evidence of this is now also widely available on social media. Yet the Kiev leader spent at least two days feverishly calling for war between the world’s two largest nuclear powers.

Even as NATO stated that a stray Ukrainian missile had caused the catastrophe in Poland, Zelensky doubled down: “I think it was a Russian missile – based on the confidence I have in the military reports.”

On Thursday Zelensky backtracked somewhat after he realised that the Biden administration and NATO would not come to his rescue. “I don’t know what happened. We don’t know for sure. The whole world doesn’t know.” Experts from his country would take part in an international investigation, his administration said.

The Ukrainian president complained that his allies did not adequately appreciate that Ukraine was the “real air defense of all of Eastern Europe” and Ukrainian Foreign Minister Dmytro Kuleba called references to a Ukrainian anti-aircraft missile a “conspiracy theory” orchestrated by Russia.

Mykhailo Podolyak, one of the top advisors to Ukrainian leader, declared that the strikes were “not an accident, but a deliberately planned ‘hello’ from [Russia], disguised as a ‘mistake.’”

The US and Russian satellites however must have recorded this launch. In other words, both sides know where the S-300 originated from: Ukraine. According to intelligence sources, the US Department of Defense had the technical data from the National Reconnaissance Office that had pinpointed the launch location.

Russia however must be held responsible for the attack because of its war of aggression against Ukraine, Zelensky insisted. US Secretary of State Antony Blinken made a similar statement: Regardless of the outcome of the investigation, “we already know the party ultimately responsible for this tragic incident: Russia”. The phrase “ultimately responsible” was nonetheless the dead giveaway: Essentially Blinken was confirming that Ukraine had fired the S-300. 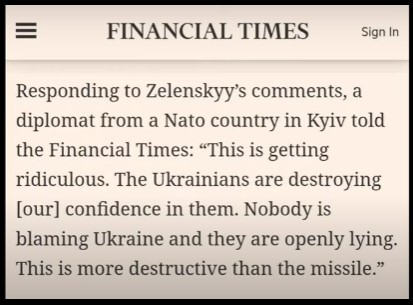 The Financial Times blamed Kiev for eroding confidence in their cause because of ‘openly lying’. Screenshot from the FT

On Thursday however, the Financial Times published a damning response to Kiev’s efforts to ignite a wider war.

The incident has nevertheless highlighted how the Anglo-Saxon media is able to easily foment a crisis, stir up strong emotions and thus create the conditions for deadly nuclear escalation, according to George Beebe of the Quincy Institute. Beebe previously led the CIA’s Russia Analysis Group.

“We’re all walking close to the edge of a disaster, and the United States should not be confident that we won’t be pushed over that edge by forces we can’t control,” said Beebe.

Within two hours, after Reuters had reported that Polish Prime Minister ​​Mateusz Morawiecki called an emergency meeting of his national security team, it became clear that Russia was an unlikely culprit. Despite this, many top officials persisted in calling for outright war.

Russia denied the claim, saying that “[n]o strikes on targets near the Ukrainian-Polish state border were made by Russian means of destruction”.