Riots break out in Malmö after Quran burning

The city of Malmö, in Sweden descended into chaos on Friday night after anti-Islam activists filmed a Quran burning.

Street fires were set and several cars were torched. A heavy police presence nevertheless struggled to bring the situation under control. “We have ongoing and violent riots right now that we have no control over,” police spokesman Rickard Lundqvist told local outlet SVT. 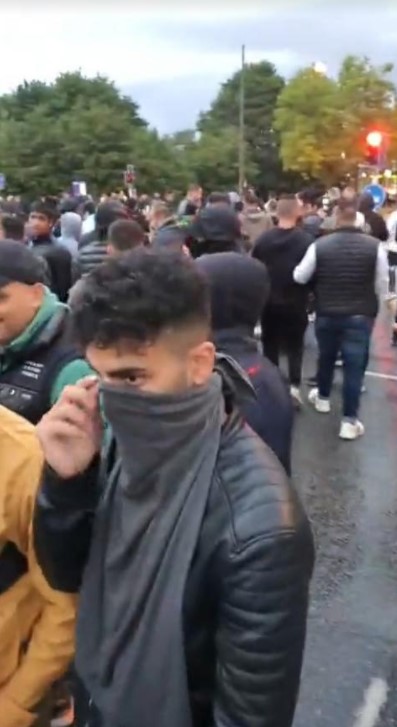 Immigrants stoned the police and set fires in the street. An underground car park was set alight a kilometre from the riot scene. Photo: FWM

As rioters chanted “Allahu Akbar”, a major fire was reported in an underground car park in the city, near the unrest.

Earlier, Swedish police chose not only to deny the anti-Islam Danish politician Rasmus Paludan’s application to hold a square meeting in Sweden where he intended to burn a Quran, but also denied him an entry permit when he arrived at the Öresund Bridge – the border between Denmark and Sweden.

Some 30 officers waited for him because he constitutes “a threat to public order and security in Sweden”.

Swedish authorities also issued an entry ban for two years. The motive is that Paludan’s presence can upset Muslims and make them break the law. But despite the bans, the Quran was still set alight on Friday – in the middle of Rosengård.

Party leader for Stram Kurs, Paludan wants to ban Islam in Denmark. In the general election last year, the party reached 1,8 percent of the vote, which was 0,2 percentage points below the barrier for entering the Folketing.

Paludan has burned the Quran in Denmark at several public demonstrations, but in Sweden it was stopped. First, his application to burn the Quran outside the mosque in Rosengård was rejected. He was then denied permission to gather throughout the Skåne region. And when he still chose to travel to Sweden, the police waited for him and refused him entry.

But other members of his party set alight the Quran in Sweden instead.

Paludan has received hundreds of threats since he made it known that he intended to burn a Quran in Rosengård – everything from death threats against himself and his family, rape of his family members and pure terrorist acts. 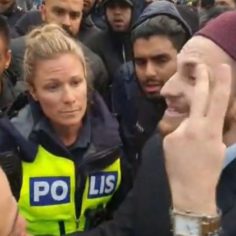 A Swedish policewoman tries to reason with a protester who is inciting the mob. Photo: FWM

“It is absurd that rapists and murderers are welcome, but not me,” he told Swedish daily Nya Tider. Rasmus Paludan will appeal the decision to ban him.

The rioting on Friday started after three Stram Kurs party members had played football with a Quran. The police immediately arrested them and they were informed that they were suspected of incitement against ethnic groups. Other participants were also taken away by the police for questioning.

But it just so happens that incitement against an ethnic group to desecrate a religious scripture has never been established in Sweden which has had no blasphemy laws since the 1970s. However, the police have great opportunities to act if they claim that they “suspect” that an act could be judged to be “criminal” in retrospect by a prosecutor.

The Swedish police, mainstream media and most politicians have clearly been opposed to the anti-Islam demonstration and worked together to prevent it, said Swedish artist Dan Park, the co-organiser. 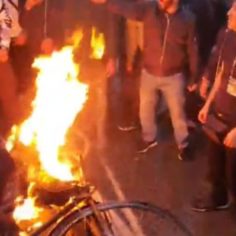 Rioters cheer while filming the destruction of property in Malmö on their mobile phones. Photo: FWM

“You should have the right to hold demonstrations even if people get upset. Sweden is a secular society. We have no obligation to be silent but should have the opportunity to criticize all religions,” Park told Kvällposten.

Party members of Stram Kurs thus entered the immigrant no-go area of Rosengård in Malmö on Friday afternoon and burned a Quran on a bike path. During the operation, the party was attacked by an aggressive immigrant who armed himself with a plank, but they were still able to complete the protest action.

“The Swedish state is afraid of Islam. Therefore, they go against their own constitution and deny us the right to gather,” it was stated in a video from the burning. “Our message is that these are our countries. There is no time to waste. Now it’s time to fight.”

Paludan earlier told Nya Tider: “Swedish police and the Swedish government were very afraid that if they gave me permission, it would make the Swedes dare too.”