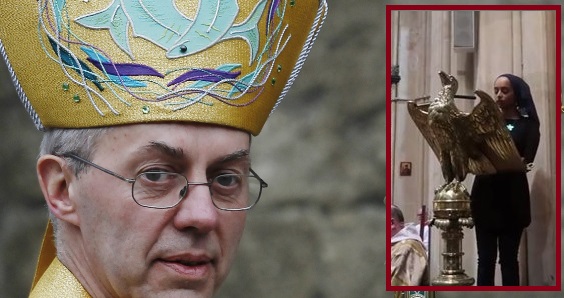 The Archbishop of Canterbury is feeling the heat over a reading from an Islamic text in his church denying that Jesus was the Son of God.

The Archbishop of Canterbury is feeling the heat over a reading of an Islamic text that denied Jesus was the son of God and is being urged to discipline a Scottish Episcopal cathedral.

Justin Welby is under pressure to intervene after a service last week at St Mary’s Cathedral, Glasgow, contained a recitation from the Islamic text, Christian Today reported.

Rev Dr Gavin Ashenden, chaplain to the Queen of England, has called for the provost to apologise and has hinted he should quit his post.

“Some people will wonder if he has sufficient theological astuteness to remain in such a responsible office in times as fraught as these?” he wrote in a blog post. “Our interfaith relations require both integrity and competence. The strategy in Glasgow appears to have been short of both.”

The conservative grouping GAFCON UK on Thursday also criticised the church because the verses recited contradict Christian teaching about Jesus.

Rev James Paice, a member of the GAFCON UK Taskforce, said they were “appalled at the lack of discipline by the Scottish Episcopal Church at this continued syncretism and confusion over mission”.

A senior clergyman at the cathedral in Glasgow has defended the anti-Christian Islamic passages from the Quran which were read from the lectern.

The service was held on the feast of the Epiphany when western Christians mark the visit to the infant Jesus by wise men.

The cathedral provost said the reading was aimed at “promoting understanding” between the two faiths, but fellow Anglicans see the event as an open submission to a different faith. Provost, Rev Kelvin Holdsworth, refused to speak to Christian Today about his decision.

St Mary’s invited local Muslims to join the service, who while acknowledging Jesus as a prophet, believe in Allah. A student, Madinah Javed, read from the lectern in Arabic from the chapter of Maryam, or Mary.

The chapter tells the story of the birth of Christ to the virgin Mary, and includes the Islamic teaching that Jesus is not the son of God and should not be worshipped, seen as a clear provocation by fellow Anglicans.

Denying that Jesus was God’s son, goes against a key Christian belief. The cathedral has declined to comment specifically on the declaration that Jesus was not the son of God on its website.

Welby, as head of the Church of England, has no strict authority over the Scottish Episcopal Church. But as the spiritual leader of the worldwide Anglican Communion, he can exert moral pressure over them at the next conference of global Anglican leaders.

“It’s a strange and erroneous matter for the clergy leadership of a cathedral to allow a reading from the Quran which later goes on to deny the divinity of Christ. Of course it is nice to invite people of other faiths to be present for worship, but sadly this recitation reveals a naivety and the growing tendency towards a lack of confidence in the uniqueness of Christ.

My Muslim friends have a strong confidence in their faith and would not be at all happy if a passage like John chapter 1, which affirms Jesus is God, was read out in their mosque. So why did the leadership of the cathedral allow a recitation from a book which Muslims believe is the final unaltered revelation from God which supersedes the Bible?”

Police Scotland confirmed yesterday that it had launched an investigation after staff at the church were subjected to “offensive, abusive and sectarian comments”.

The reading was highlighted on Breitbart, which led to deluge of ire directed at the staff, The London Times reported.

Holdsworth confirmed that he and others had received a “number of offensive messages”. He said: “We’ve received Islamophobic and other hate-filled messages.”

A statement from St Mary’s said: “St Mary’s has received a number of offensive messages on Facebook and other platforms.

“These have been reported to Police Scotland. We are grateful to the police for their support at this time.”

A Police Scotland spokeswoman said: “We can confirm we are investigating reports of offensive comments made towards St Mary’s Episcopal Cathedral in Glasgow and inquiries are ongoing.

“Police Scotland will not tolerate any form of hate and encourages all communities to take action to ensure no one feels threatened or marginalised.”