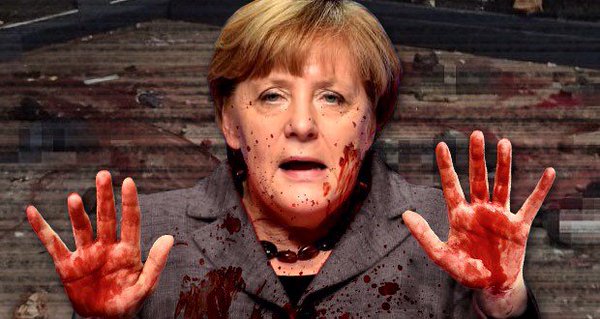 Angela Merkel has blood on her hands. Photo supplied
Berlin

German soldiers flew many people from Afghanistan to Germany, especially with the A400M aircraft of the German Federal Air Force. Now it has become known that among the “rescued” Afghans “were hardly any local staff”.

Bild-Zeitung reported that according to its own information, the Bundeswehr has flown out more than 4000 Afghan nationals since the fall of Kabul. But the German daily has now learned that only a fraction of them were actually “local staff” who worked for the Bundeswehr and other German organizations and these allies have been in danger since the Taliban’s triumphant advance.

Bild learned from a conference between the Ministry of the Interior, the Foreign Office and other authorities on Thursday, that of almost 3600 Afghans who had been flown out since August 17, only around 100 were actually local staff, and around 370 of their family members had been taken on the flight.

Is the German federal government lying?

It appears as if the Merkel administration had been caught lying, because on Wednesday the Foreign Office had declared that there were “a considerable number of former local workers” among the Afghans who had been rescued from the Taliban.

Chancellor Angela Merkel had also announced that the government wanted to ensure that “above all” local Afghan workers were brought to Germany.

“This project failed,” according to information from the Bild newspaper, because a total of more than 13 000 local employees and their family members had received an acceptance letter from the federal government. In the past few months, only a small number have been brought to Germany on the Bundeswehr evacuation mission.

From these indications one can conclude that masses of “refugees” are coming to Western Europe from Afghanistan, the vast majority of whom travel with modern cell phones, but surprisingly without valid papers.

From generally well-informed circles it is said that the Afghans who made it to the transport aircraft of the Federal Air Force at the Kabul airport were not strictly checked for their identity. Representatives of the federal government announced that such precise checks would only take place after their arrival in Germany.

About 100 aircraft of the United States Air Force have arrived at the air base, reported a spokeswoman for the base. More than 5000 evacuees had traveled from there on around 22 flights. The flights are expected to last for the whole weekend, reported the Epoch Times.

‘How many Afghan women actually care about a German dead soldier?’

On Wednesday the Bundestag debated the Afghanistan mission. Right after Chancellor Angela Merkel, who may have given her last speech in parliament as her last term nears its end, AfD parliamentary group leader Alexander Gauland replied.

Gauland described the international Afghanistan mission as wrong from the start. The idea of exporting the Western way of life had totally imploded, he pointed out. Gauland said the notion of “One World” has been shattered by the events in Afghanistan. “The majority of Afghans don’t give a damn about westernization. Anyone who thinks that one can treat deep, ethnic and cultural imprints with education courses and gender mainstreaming is only attesting to a monstrous ignorance,” he said.

The AfD co-leader also stated that his parliamentary group only supported the evacuation of former local armed forces to a very limited extent. In addition to the former Bundeswehr auxiliaries and their families, Germany should not accept any further refugees.

Then Gauland talked about the 59 dead German soldiers who had given their lives for nothing in the Afghanistan mission. “In order to bring gender equality into the Muslim world, German men had to lose their lives there. How many Afghan women in the highest offices or girls in schools actually care about a German dead soldier? ”

And finally he said: “Instead of defending women’s rights against the Taliban in the East, the Bundeswehr should rather protect the German borders from the dangers that arise from the influx of people to whom our way of life is completely alien: 2015 must not be repeated!”