The German aid worker Sybille Schnehage, in an interview with German site WSR, warned that three million Afghans could soon flee to Europe. The security situation in Afghanistan has sparked an exodus as a result of a ruinous US foreign policy. And thanks to NATO's involvement, Europeans will have to endure the consequences of masses of ill-adapted young Afghans flocking to Europe.

Schnehage has worked with humanitarian aid in Afghanistan since the 1980s, and in 1994 founded the organization Katachel, which, among other things, has helped establish 31 schools in Afghanistan.

“One can assume that up to three million Afghans will come to Europe within the foreseeable future,” Schnehage told German regional broadcaster WDR. “I always ask people: ‘Why won’t you go to Saudi Arabia, where there are Muslims; it is your culture.’ The answer is always, ‘No, Germany is better.’”

“Yes, we absolutely must help Afghans build a future in the countryside. If not, the consequences for Germany and Europe are predictable,” says Schnehage.

In the interview, Schnehage also said that lawlessness was a bigger problem for the Afghan people than the Taliban, and that aid organizations like hers could work with the Taliban in the areas where they hold power. 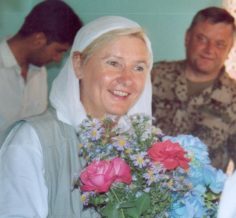 Sybille Schnehage has warned of a flood of 3 million Afghan migrants to the EU. Wikipedia

“I have operated girls’ schools under Taliban rule. The foremost problem has always been security. How do we get girls to school unharmed? In the Afghan countryside, there are many young men without work who cannot afford to buy a wife. It costs at least €5000.

“Because of this, girls are often kidnapped, including on the way to school. The Taliban say that girls must be safe. If we can guarantee that they can get to school safely, they have no problem with guaranteed education, up to about the 6th grade,” Schnehage concluded.

After the announcement of the withdrawal of American troops, the Taliban launched a rapid attack on the positions of the US-supported Afghan army. In the past week they were able to take the capitals of 16 provinces. Last Thursday, the Taliban brought Kandahar and Herat, the second largest and third largest cities, respectively, under their control.

France, Germany, and the Netherlands have meanwhile suspended deportations of Afghan migrants from their soil. Two days earlier, however, together with Austria, Belgium, Denmark and Greece, these EU countries had demanded that the European Commission allow deportations. In a letter to the EU executive, they said that stopping deportations would “send the wrong signal and is likely to motivate even more Afghan citizens to leave their home for the EU”.

Denmark as well as Spain have since stated their responsibility to help the Afghans who are now threatened due to their connection with the EU’s involvement in Afghanistan. And Afghans who worked with the British military will be offered relocation to the UK, the government announced. This move is expected to facilitate the relocation of thousands more.

“The US spent over $2 trillion on the war and $143 billion propping up Afghanistan’s puppet government over nearly 20 years only to see it all fall in a matter of days with little resistance,” blogger Chris Menahan pointed out.

36 days ago, President Biden told the American people that the Taliban would not take over #Afghanistan after he ordered the removal of U.S. troops. pic.twitter.com/FiG5pWsyey

The Chancellor candidate of the Greens in Germany, Annalena Baerbock, unsurprisingly called on the EU to make arrangements for the admission of a flood of migrants from Afghanistan. The same mistake should not be made as in the Syria conflict, when the EU was unprepared for the wave of migrants, she said.

Europeans must prepare “to join forces with the European countries that want to, and above all with the Americans and Canadians, so that we can agree on clear quota rules together,” Baerbock told Deutschlandfunk.

At the same time, the federal government and NATO member states should remain in contact with the Afghan government to see how they can be supported on the ground. The task now is to do what “was fatally not done in Syria,” warned the Green politician.

The Afghan local staff who had been in German service in the past, should be brought to Germany with an airlift. “These people are now in these hours, in the days, threatened with their life, because they are considered traitors, because they have worked with the NATO troops, with our Bundeswehr. The crisis is now about saving human lives”.

“And that’s why the most important thing for me now is to get these people out of there so that we can guarantee them a life at all.”

The UNCHR has urged countries to keep their borders open, despite rumours of a “fourth wave” of the Covid-19 pandemic.

We are extremely concerned by the rapid escalation of conflict in Afghanistan and appeal for civilians to be allowed access to safety, inside + outside of the country.

Not keeping borders open = thousands of lives at risk. @UNHCRafghttps://t.co/6fjLKn8S5J