Thousands in Europe rise up against health tyranny

In a cold and drizzly Berlin, a demonstration at the Brandenburg Gate was supposed to start at 12 noon on Saturday. But the protest was banned and the gate was locked down by the police and even tourists were ordered by law enforcement to leave the square. But authorities could not keep the lid on hundreds of other spontaneous gatherings.

Some 2000 demonstrators had been registered by lawyer Nicole Reese. Together with the actress Miriam Stein, the demo was supposed to lead through the government district. But then the ban followed because violations of Corona rules were expected.

Authorities allegedly banned the demo because “lateral thinkers” had threatened to infiltrate it even as the organizers explicitly positioned themselves in advance against “right-wing extremism and racism”.

The organizers had even agreed that defamatory posters and AfD advertising would be forbidden, face masks would be mandatory, as well as keeping the required distance at all times. The organizers had actually planned to hand out masks to those without a face mask. Despite intensive negotiations, and many compromises, the Berlin authorities banned the demonstration on Friday afternoon.

“We are shocked about the ban, because we have expressly made it clear in advance that we will adhere to the hygiene requirements such as face mask and social distancing,” a Berlin newspaper quoted Nicole Reese. Protesters instead walked through the city individually or in small groups. The police estimated the number of demonstrators in the three-digit range. 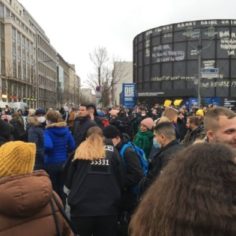 In the afternoon, the group Autokorso Berlin called for a rally at Checkpoint Charlie where only around a third of the cheerful crowd wore masks. Antifa was also allowed to use the microphone. “Vaccination helps, vaccination protects and relieves the intensive care units. Thank you,” the Antifa member said. The bored-looking crowd simply shrugged off his uninformed comments. This would not have been possible at an Antifa rally. Anyone with a different opinion is regularly assaulted by Antifa.

Another interlocutor thanked the previous speaker, even though he said he did not share his opinion. “We are very surprised that you, the so-called Antifa, call us Nazis here. That is incomprehensible to me. We haven’t been doing anything different from you for years in criticizing these political criminals.”

“I don’t believe the press,” said one man. “Everything mainstream. I haven’t read a newspaper for 30 years. Last Monday, a TV reporter was attacked by police at a Corona demo. The station deleted the video,” said the man.

Several hundred kilometers to the northwest, a protest in Hamburg kicked off at 4 pm under the motto “This is the limit. Hands off our children.” From the registered 1500 participants, it grew to 8000, but at 6 pm even the police estimated their number at 11 500 demonstrators.

NOW – Protest in #Hamburg against Covid restrictions and vaccine mandates.pic.twitter.com/5FA4k3XNi7

As recently as Wednesday, the town hall had decided that a mask would be compulsory for all demonstrations with more than 500 participants. In addition, the demonstrators are only allowed to protest in individual demo blocks of 200 people. Most of them adhered to the requirements.

Some were spotted carrying the German flag upside down – signalling a commitment to the Reich citizens. This demonstration ended in the early evening. But the protests against the German government’s Corona policy continued in Schwerin, Freiburg and Dresden as well as in small towns and villages. The number of meetings is expected to increase, reported tabloid Berliner Zeitung. Twitter user GeJoStark mapped the protests of just one day: December 19.

On December 19, 2021 in Gotha, Thuringia, the police assaulted citizens protesting against Corona measures, clearly showing who and what the uniformed are protecting.

At a huge anti-Corona march in Brussels riot police attacked journalists and peppersprayed them. Tens of thousands of people took part in the demonstration “March for freedom” against compulsory vaccination. In London too, thousands of anti-Corona demonstrators gathered and in Steyr, Austria, the vice-mayor of the city joined thousands of disgruntled anti-vaccine citizens.

Disturbing images from a massive anti-Corona demo in Vienna showed how the police separated a minor from his father for no apparent reason, slamming him to the ground. The young child started screaming in a panic and numerous witnesses to the incident had to intervene to stop the officers.