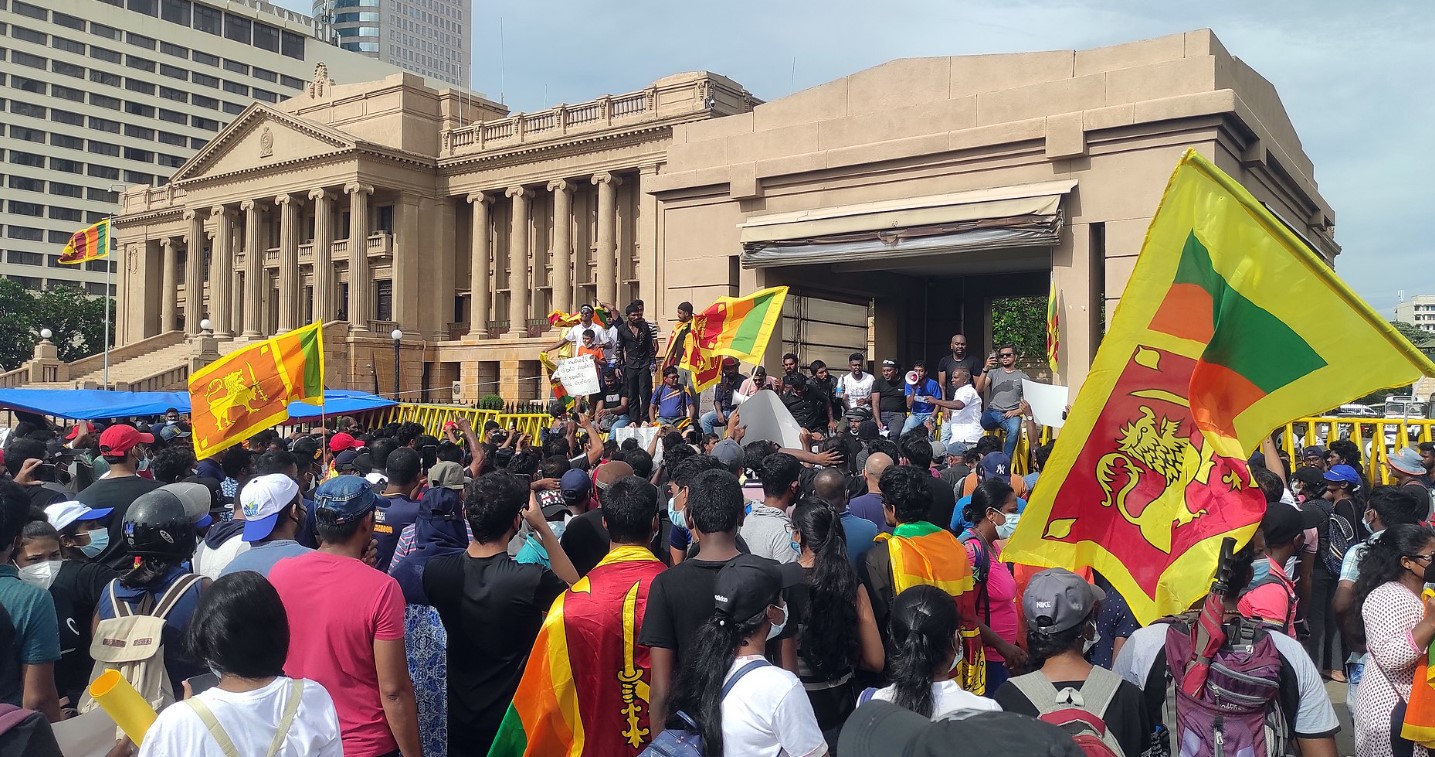 Protesters in Sri Lanka on April 13, 2022 in front of the Presidential Secretariat, The leadership is now in hiding, fearing death. Wikipedia
Vienna

The globalists are no longer afraid of public threats. George Soros once again penned a guest commentary in an Austrian newspaper with Bilderberg affiliation and in it he laments the end of abortions in the US. For Soros, the decision of the US Supreme Court is the "end of democracy".

The US Supreme Court has overturned the extremely liberal abortion law, which previously provided for abortions up to the viability of the foetus. The fact that the landmark Roe v. Wade was overturned, has irked Soros. For the US billionaire, this decision means the “end of democracy” in the US. For the mainstream, “democracy” is dying because viable foetuses can no longer be killed in the womb. Yet this reading of the facts is only partially correct, since US states themselves are easily able to create their own legal framework for abortions.

The ruling means that “democracy” in the US will be transformed into a repressive regime, grumbled globalist Soros in an opinion peice in Der Standard. For democracy advocates, this is a confusing portrayal of the situation, but globalist connoisseurs know: When Soros and his WEF friends like Klaus Schwab or Bill Gates speak of “democracy”, they really mean a global dictatorship subjugated to them.

Because only when we no longer have anything to say and no longer own anything will they be happy according to Agenda 2030. Cars, flights, eating meat, property and even procreation: all this will be reserved for the global elites in the future, if they have their way.

The Republican Party is also a thorn in his side, because “even greater, however, is the danger to which the US is exposed by enemies of democracy at home. These include the current Supreme Court, dominated by right-wing extremists, and Donald Trump’s Republican Party, which appointed these extremists,” Soros opined.

It is disturbing how the globalist who has brought misery to so many countries is allowed to denigrate ordinary judges as “right-wing extremists” and this open incitement still goes unchallenged in the media.

Soros makes it clear: For him, “extremists” run US courts since they all contribute to strengthening Trump and his supporters with their decisions against abortion, against fighting climate change and against LGBTQ rights. Only with a total defeat of the Republicans would it be possible, according to the big financier, to restore “American democracy”.

Soros is unperturbed by his completely upside-down world: “Democracy” can only exist if there is only one party – controlled by himself and his Open Society Institutes.

He also blames China and Russia for the end of US “democracy”. The US billionaire sees the US threatened from abroad by Xi Jinping in China and by Vladimir Putin in Russia, which want to impose a multipolar worldview contrary to his own. He openly criticised the cooperation between Russia and China.

He already described this in May in a guest commentary for the same paper. Under the title “The Battle of Our Lives”, Soros bluntly declared: “We must defeat Russia to save our civilisation!” because the Third World War could begin and “possibly our civilisation would not survive it”.

Evidently, his plans for world domination are proceeding too slowly and only a victory over Russia “can save civilisation” according to the 91-year-old’s remarks at the WEF meeting in May.

These are not the first and only guest comments by globalists in the mainstream media. More and more often they are putting out warnings in mainstream newspapers. Klaus Schwab’s guest article in the Handelsblatt in January this year openly called for the end of national parliaments and the introduction of a world dictatorship under the glorifying name of “Governance 4.0”.

With extreme energy shortages and inflation in Sri Lanka over 50 percent, food prices rising by 80 percent, a half-million people fell into poverty over the last year.

“But the underlying reason for the fall of Sri Lanka is that its leaders fell under the spell of Western green elites peddling organic agriculture and ‘ESG’, which refers to investments made following supposedly higher Environmental, Social, and Governance criteria. Sri Lanka has a near-perfect ESG score (98) which is higher than Sweden (96) or the United States (51),” explained Micheal Shellenberger.

Higher oil prices resulted in transportation prices rising by 128 percent since May as a result of the country insisting on adhering to Soros’ ESG directives.

“The biggest and main problem causing Sri Lanka’s fall was its ban on chemical fertilizers in April 2021. Over 90 percent of Sri Lanka’s farmers had used chemical fertilizers and, after the ban, 85 percent experienced crop losses. After the fertilizer ban, rice production fell 20 percent and prices skyrocketed 50 percent in just six months. Sri Lanka had to import $450 million worth of rice despite having been self-sufficient in the grain just months earlier. The price of carrots and tomatoes rose five-fold. Tea, the nation’s main export, also suffered, thereby undermining the nation’s foreign currency and ability to purchase products from abroad.

“While there are 2 million farmers in Sri Lanka, 70 percent of the nation’s 22 million people are directly or indirectly dependent on farming.”