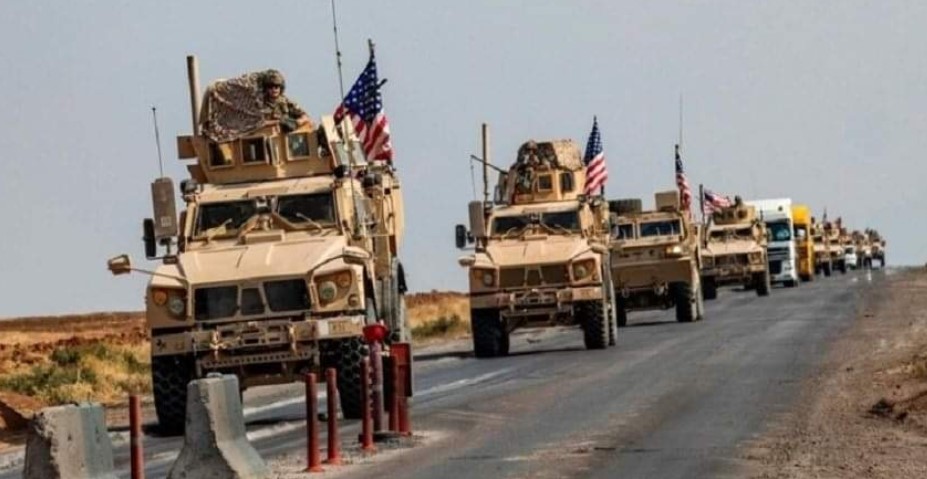 Why is the US still in Syria? Photo credit: Mideast Discourse

The summits date from January 2017, and are named for the Kazakhstan capital they were first held at. The trio of leaders decided the next meeting will be held in Moscow before the end of the year.

The Syrian Foreign Minister, Faisal Mekdad, arrived in Tehran late on Tuesday to be briefed about the latest decisions following the meeting of the presidents.

Many important issues were discussed by the trio concerning the situation in Syria, which has developed into a stalemate. Global media has stopped covering Syria since 2019 when the battlefields went silent, but a political solution has been elusive.

One point that Turkey, Russia and Iran agreed upon was the need for the US occupation troops to leave Syria, and their unified opposition to the Biden administration policy in Syria, which includes the need to lift US sanctions on Syria which are oppressing the Syrian people.

“We have certain differences concerning what is happening on the Euphrates eastern bank. But we have a shared position that American troops must leave this territory,” Putin said while adding, “They must stop robbing the Syrian state, Syrian people, illegally exporting oil from there.”

The trio affirmed that there was “no military solution” to the conflict in Syria, and agreed on the need to eliminate terrorism and opposed any attempts to divide the country.

The three leaders also jointly condemned Israel’s ongoing attacks on civilian targets in Syria, and agreed that the crisis in Syria could only be resolved peacefully and by the Syrians themselves.

Raisi said, “The international community bears the responsibility to solve the crisis of the displaced and Syrian refugees, and we will support any initiative to do so.”

For at least two months, Erdogan has threatened to conduct a fourth military invasion into northern Syria. Analysts had thought the summit would be used by Iran and Russia to convince Turkey a new attack on the US-sponsored SDF in the northeastern Kurdish region would be a destabilizing event for the region. It appears that Turkey was able to get assurances from Iran and Russia that the SDF would not present a border terrorist threat to Turkey.

The US, Russia and Iran had all shared the view that Turkey should not begin a new military attack in northern Syria.

Turkey and US are NATO members and had been allies. But, the US chose to partner with the SDF, who are a separatist group in Syria led by Kurds who are following a socialist political ideology based on the communist framework of the PKK, an internationally outlawed terrorist group who have killed thousands in Turkey over three decades.

The trio agreed that terrorism must be eradicated everywhere, and there cannot be “good terrorists” who are used by the US, while others are deemed “bad terrorists” such as ISIS and Al Qaeda.

US President Obama began the US-NATO attack on Syria in 2011 for ‘regime change’. He failed. The US used the Muslim Brotherhood in the Middle East, as well as global Al Qaeda branches which were transported into northern Syria from their base in southern Turkey, were the CIA operated a terrorist headquarters which was finally shut down in 2017 by President Trump.

Erdogan is a Muslim Brotherhood follower, and his AKP party is aligned with the international terrorist group banned in Egypt, Russia, Syria, Saudi Arabia and the UAE.

The Biden administration has made no changes to US policy in Syria since taking office. The US is not present in any Syrian peace talks. Obama started the destruction in Syria, but Biden is not offering any solution. The US sanctions have prevented any reconstruction from beginning, and the Syrian people have been struggling under hyper-inflation, with no end in sight.

Russia, Turkey and Iran agreed the US-EU sanctions should be lifted and described them as being “in contravention of international law, international humanitarian law and the UN Charter including, among other things, any discriminatory measures through waivers for certain regions which could lead to this country’s disintegration by assisting separatist agendas.”

Trump had ordered the withdrawal of US troops from Syria, but the Pentagon insisted that they stay in support of the SDF who steal the oil from the main oil field in Syria and sell the oil to support their socialist administration. That oil is the property of Syria, and because they are refused access to the oil, the Syrian people live with just two hours of electricity per day.

Damascus considers the US troops in Syria as a military occupation force which destabilizes the country and is against the UN charter and international law.

US raids on terrorists in Idlib

Idlib is the last remaining terrorist controlled area in Syria. Hayat Tahrir al-Sham is the Radical Islamic terrorist group who keep about three million persons as human hostages. Turkey protects the terrorists and keeps Russian and Syrian military from attacking Idlib, while the UN and other humanitarian groups keep the terrorists, their families, and civilians fed. The US has also been very vocal and has accused the Syrian and Russian military for attacking terrorists in Idlib.

In a double-faced US policy in Idlib, the US has continued to kill ISIS leaders in Idlib, including the first assassination of the ISIS Calipha Baghdadi ordered by Trump. Since then, another five ISIS leaders have been killed by the US in Idlib. The US know that the terrorists in control in Idlib are allies of ISIS, and yet the US policy is to protect Idlib from being cleared of terrorists.

In 2015, Russia was asked to enter Syria as the Al Qaeda affiliate Jibhat al-Nusra was threatening to create an Islamic State in Syria. Putin recalled at the summit, “We broke the backbone of international terrorism there.”

Putin and Erdogan discussed the supply of grain from Russia and Ukraine to world markets. Putin thanked Erdogan for his efforts “to mediate by providing Turkey with a platform for negotiating food issues and grain exports across the Black Sea.” Putin called on the US to lift all restrictions on grain exports from Russia to improve the global food market situation.

Erdogan has been leading efforts to broker a deal to allow thousands of tons of grain that is being blockaded by Russia to leave Ukraine’s ports. Turkey has responsibility under the 1936 Montreux convention for naval traffic entering the Black Sea, and is proposing that Russia allow Ukrainian grain ships to leave Odessa on designated routes.