Extinction Rebellion Protesters, outside the Headquarters of JP Morgan, Bournemouth, protesting about the companies use of fossil fuel. Photo credit: Nick Fewings

Descendants of the oil billionaires have been paying hundreds of green activists $25 000 a year each for their protests around the world, Britain’s Daily Mail reported August 10. Aileen Getty, Rebecca Rockefeller Lambert and Peter Gil Case fund such salaries through their non-governmental organizations (NGOs).

Aileen Getty, granddaughter of Getty Oil’s founder, now has over $1 million through her Climate Emergency Fund paid to activists. The wealthy heirs to the Rockefeller family, Rebecca Rockefeller Lambert and Peter Gil Case, whose ancestors founded Standard Oil in 1870, have spent over thirty million dollars on the Equation Campaign.

They all pay the activists, who, according to the Daily Mail, have caused disturbances with their actions around the world, especially in recent months, and finance the relevant NGOs. Lambert and Case, for example, put eco-activists from groups like Just Stop Oil on the payroll for $25 000 each and also funded the organization themselves. The descendants of oil baron John D. Rockefeller also established a fund to support anti-fossil fuel protests.

In recent months, thousands of activists have taken to the streets around the world to protest. The environmentalists also rioted and caused destruction, including in the US, Europe, the UK and Australia. Tires of SUVs were punctured in the US, UK and Australia, and famous oil paintings were vandalized in EU countries by the very activists who are on the payrolls of oil heirs’ non-profit organizations.

The Daily Mail questioned this type of funding: “Three American oil scions have been bankrolling mobs of eco-zealots who have terrorized the world by slashing tires, blocking traffic and attacking firms. Aileen Getty, Rebecca Rockefeller Lambert and Peter Gill Case, who are heirs to their families’ huge fortunes, are paying the salaries for thugs through their non-profits in an apparent bid to offset their relatives’ legacies.” 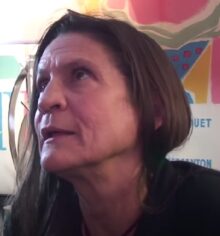 Aileen Getty is a typical rich, spoiled American heir who hopes that funding eco-terrorists will drive up the price of oil. Screenshot from YouTube

In 2019, Aileen Getty donated $500 000 to Extinction Rebellion climate activists. She herself is convinced that “a comprehensive disruption of everyday life” is necessary for actions. Getty conforms to the stereotype of idle, rich heirs: She contracted HIV from an extramarital affair and has survived numerous drug overdoses.

She told the New York Times that she wanted to support the effectiveness of the activists she sponsored and has so far donated $1 million from her own wealth to the Climate Emergency Fund. In her opinion, the civil disobedience spurned by such grassroots organizations is just a warning signal and the destruction is minimal compared to what is at stake.

She told the newspaper: “Let’s not forget that we’re talking about extinction. Don’t we have a responsibility to do everything we can to protect life on Earth?”

The Daily Mail also pointed out that scaremongering by various scientists are also financed by the oil heirs. In the US, the Climate Emergency Fund of the NGO Scientist Rebellion made $100 000 available for consultant salaries and travel expenses. Eco-warriors need money since they spend their lives protesting. Without funding, we would therefore not see the likes of Greta Thunberg making a fuss.

NASA climate researcher Peter Kalmus, who also belongs to this organization, brought together around 1000 scientists in 25 different countries who blocked traffic and chained themselves to landmark buildings.

According to the Daily Mail, Kalmus justified his involvement in Scientist Rebellion’s concept of disrupting citizens’ everyday lives as follows: “He spent 16 years looking for ways to save the planet and came to the conclusion that the best way to do it is to wreak havoc on ordinary people.”

Last year in June, the Wall Street Journal reported that climate activists were driving up the price of oil: “Some investors are wagering that Wall Street’s preference for green energy will depress spending on oil extraction, setting the stage for supply shortages and higher fuel prices. The bets come as money managers line up trillions of dollars for wind, solar and other renewable programs and expenditures on oil projects tumble. The drop in fossil-fuel spending is becoming so severe that energy companies could struggle to quench the world’s thirst for oil, some analysts say.”