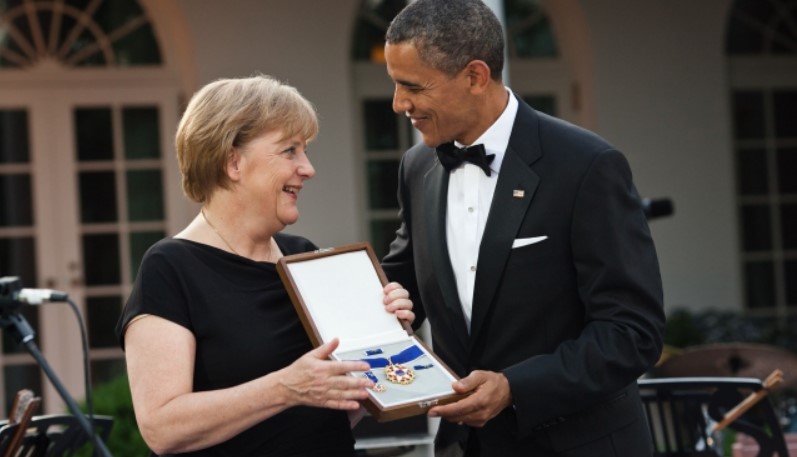 Merkel with US President Barack Obama at the presentation of the Presidential Medal of Freedom (2011). Wikipedia

Former Chancellor Angela Merkel has been awarded the Peace Prize by the UN cultural organization UNESCO. "The entire jury was touched by her courageous decision in 2015 to take in more than 1.2 million refugees, particularly from Syria, Iraq, Afghanistan and Eritrea, " said the President of the jury and 2018 Nobel Peace Prize winner Denis Mukwege in Paris . "It's a lesson she leaves to history."

UNESCO Director General Audrey Azoulay also paid tribute to Merkel’s commitment. “Creating peace is also about opening doors for those who are suffering,” she explained. “The jury’s decision is a reminder that welcoming migrants and refugees is a key concern.”

The Peace Prize has been awarded every year since 1989 to people, organizations or institutions that have made special efforts to promote, research or secure peace .

In Hungary meanwhile, “siege-like conditions” prevail on the southern border with Serbia, as Balázs Orbán, Prime Minister Viktor Orbán’s political director, said on his Facebook page. According to Balázs Orbán, the number of border violators in Hungary has increased by more than 90 percent. He explained that the food crisis caused by the war is already showing its effects and illegal migration is increasing. As early as June, Budapest reported that the situation on the Balkan route was deteriorating again.

Balázs Orbán also shared some research in his contribution, according to which no fewer than 36 million people have fled their homes in Africa this year due to worsening economic conditions and political instability, and many of them have already made their way to Europe. One of the main destinations for migrants is Germany, which, according to critics, is already experiencing a population exchange similar to Austria as a result of the mass immigration that has been taking place for decades.

Even the far-left Minister-President of Baden-Württemberg Winfried Kretschmann believes Germany is facing major problems with accommodation due to the increasing number of refugees. Justice Minister Marion Gentges had previously said that the situation was extremely serious.

Kretschmann told the Südwest Presse on Tuesday: “We already have more refugees than in the refugee crisis of 2015.” He warned: “The population must be prepared for the fact that we will find ourselves in difficult situations again.” Previously, Justice and Migration Minister Marion Gentges (CDU) did not rule out that sports halls would have to be used again as emergency accommodation, according to the Stuttgarter Zeitung.de