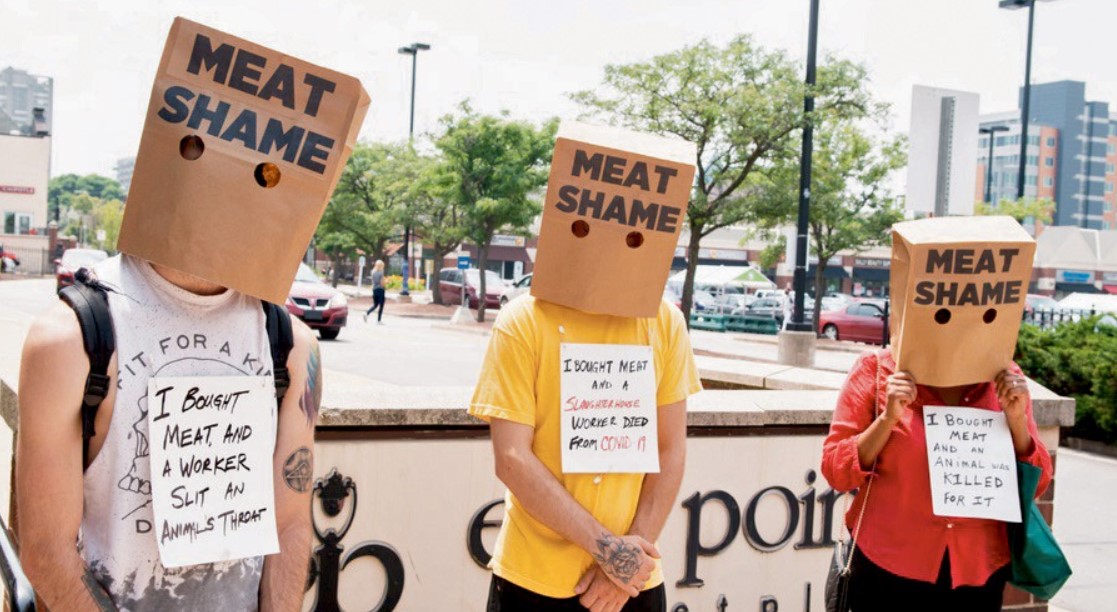 Globalist-sponsored animal rights activists from PETA are killing two birds with one stone here, when trying to shame both those who don't wear face masks and those who eat meat. They posted the photo on Twitter on July 11, 2020 with the words, “Carnivores: If you don't wear a mask, here's a better idea for you.” On the paper bags it says

Skeptical of global warming? Shame… you are mentally ill

After the alleged Corona pandemic, the establishment and its media try to paint global warming as not only a threat to the existence of the entire human race, but now also a health hazard on an individual level. New agenda tools such as One Health are introduced, where the health of nature/ecosystem/climate, animals and people are woven together into one.

Many countries already require such health passes, the One Health Pass, which of course also require Corona “vaccines”. Life, health and death are connected, so climate activists in countries like Australia have since 2020 intensified the pressure on governments to start stating “climate change” on death certificates. Just as with the vast majority of all Corona deaths, where people died with Corona and not from it, they now want to add “climate change” as an underlying reason for deaths.

All the young and healthy people who, since last year, suddenly and unexpectedly began to die of blood clots and various heart problems – completely inexplicable according to the establishment and their dogmatic “science” – can now be blamed on the climate. It can then, as during the Corona, provide figures that not only falsely demonstrate an alleged pandemic or other major threat, such as alleged global warming, but can also be used for various new restrictions and not least climate lockdowns (Climate Lockdowns) – something globalists and their paid climate activists and researchers have long worked to introduce.

For the globalists, it doesn’t matter why people stay at home, use less energy, eat less meat, drive less cars, stop traveling and flying. Corona restrictions or monkeypox restrictions, manipulated travel chaos, neo-poverty due to rampant living costs or discouragingly high meat, fuel and ticket prices all produce the desired result. But they are not satisfied with constantly having to create and invent different reasons, but want to be able to have climate restrictions and shutdowns in the long term without having to resort to other excuses.

To achieve that they really only need two things: get people to believe the new lies and force us to obey their orders. Just like during the Corona, they play on people’s fear, guilt and shame. If you don’t want to die from Corona/climate, you have to do as you are told. Aren’t you killing grandma (the elderly are again singled out as the most vulnerable) because you don’t wear a mask/don’t stop going on holiday?

Should unvaccinated/meat-eating people really be allowed to join society, which they threaten with their “irresponsible” and environmentally “deadly dangerous” life choices? Meat shaming has been openly talked about for some time now and countless think tanks are now working on this by producing various campaigns and even activist manuals around it. Not infrequently, it is the same actors who previously worked on similar fear-mongering campaigns.

Shame is a trick that the globalists and the establishment have long used against us. A group that obstructs their agenda is singled out and attacked with various insults. It can be anything from “homophobic” or “xenophobic” to more recent ones such as “anti-vaxxer” or “meat-eater”. The social stigma that affects the singled out leads them to think about what they say, while the vast majority quickly learn to act and think “right” for fear of having to face that shame themselves. A modern form of publicly flaying naysayers.

In communist dictatorships like the Soviet Union, shame was institutionalized. There was even a term for it, prorabotka, a ritualistic public shaming or rather character execution that took place in schools, universities and workplaces. After Stalin’s death, such methods became more sophisticated.

An extreme form of using shame as a weapon was to “diagnose” those who thought wrong as mentally ill. The shame of being singled out as insane in front of all those around you, something that always works as a deterrent with fear and shame on others, also provided two other advantages to the tyrants.

On the one hand, it gave the impression that only the mandated opinions were normal, and on the other hand, people could then be locked up without a trial or even the need to single them out as opponents – they were deprived of their freedom in their “own interest”. The communist dictatorships then, like the globalists today – who are identical in spirit – would like to give the appearance that everyone thinks like them. This is why the establishment media systematically avoids reporting on protests against Corona restrictions or against rampant living costs and Russia sanctions this autumn.

Now the favorite method of the communists, the globalists, the technocrats, the God-haters – with the same goals in different guises – is back. Climate skeptics are mentally ill, says an “expert”, and we must trust the established “science” of the establishment, they demand.

This is reported by Australian Sky News, which, unlike its sister channels in other countries, has been unexpectedly critical of Corona restrictions and the climate narrative. Their popular show host Andrew Bolt told us on September 14 that for years he did not believe the climate narrative and revealed that he was shocked to now realize that he suffers from a “mental condition”.

He then explained why: The Australian psychologist Rachael Sharman at the University of the Sunshine Coast has published a study after interviewing 390 people in which it appears that, in Bolt’s own words, climate deniers and climate skeptics that he suffers from a “terrible disorder”.

Bolt then reveals with ill-concealed irony the type of people the study found to be at risk of suffering from this mental disorder.

According to Bolt, who cited the study, it is about older and conservative people with “analytical ability”. The host then sourly pointed out that Sharman neither questioned nor researched further why “people who are good at analyzing things are more skeptical of preachers of global warming”. He went on to say that Sharman was trying to find explanations for what the skepticism in itself may be due to, and the psychologist stated, among other reasons, that climate-related “predictions have not come true”.

Yes, our readers know that we have been debunking the climate narrative and their apologists for several years now. Not a very difficult task if you stick to real science and facts and don’t let yourself be intimidated by tyrants’ attempts to silence those who dare to question their narratives and edicts. We are not ashamed – then, now or in the future – to report as it is. On the contrary!