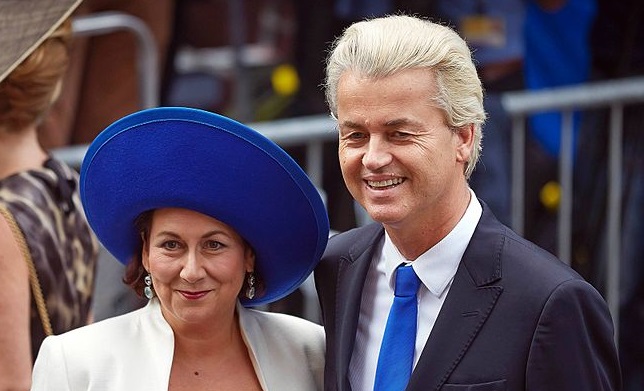 Despite the best efforts by his opponents to find him guilty of "discrimination" Geert Wilders, 53, has risen strongly in the polls, according to a survey published Sunday.

Wilders has been tried and convicted of “discrimination”, but voters are not amused. If legislative elections due next March were held this week, Wilders’ Freedom Party (PVV) would win 36 out of 150 seats in the lower house of parliament, making it the biggest single political group.

Before the trial began on October 31, the PVV was only credited with 27 seats. Prime Minister Mark Rutte’s Liberals would only win 23 seats, against 40 today, and his junior coalition partners, the Labour Party (PvdA), would gain a mere 10 seats, compared with 35 today.

The blonde anti-immigration fire-brand mostly boycotted the trial, which he denounced as political scheming. He also ignored hostile journalists outside the courtroom, leading to more hysteria in the Netherlands against him, implying he was a “racial supremacist”.

Wilders was found guilty of discrimination against Moroccans but acquitted of hate speech after remarks at an election rally in March 2014, but not fined. The Council of Moroccan Mosques is angry about the “soft” verdict and their lawyer Lucien Nix says they will sue in civil proceedings because no damages were payable by Wilders.

At the forefront of the Moroccan problem is the extremely high percentage of involvement of many Dutch Moroccans in criminal activities, with some 65 percent of all Moroccan male youths between 12-23 years of age have been detained by police at least once, according to the Dutch newspaper, the Volkskrant.

One third of this group has been detained five or more times. Moroccan criminals are convicted four times more than Dutch suspects.

Wilders has vowed to confiscate Korans, close mosques and Islamic schools, shut the borders and ban migrants from Islamic countries.