A Swedish police officer Andreas Danman, 33, was shot to death in the immigrant-dense Biskopsgården in Gothenburg on Wednesday evening. The police held a press conference after the cold-blooded execution.

A police patrol was talking to a couple of people at Höstvädersgatan in Biskopsgården when the shooting broke out. One of the policemen was hit and taken to hospital with gunshot wounds. Just before three on Thursday night, it was announced that he had died.

“This is a tragic event. It affects us all, it’s a colleague who has died on the beat. We have made a national decision to have a minute of silence at 12 and the flags at half mast throughout the country, said Klas Johansson, regional police chief, during the press conference.

Several people were taken in for questioning during the night.

Videos from the murder that are spread on social media showed how police colleagues administered first aid while saying “Fight, fight” and “Come on now old man” to the dying policeman.

The officer was shot in cold blood

The police were on site in the immigrant-dense area because conflicts had broken out there. “It is one of the areas where there is special supervision,” explained Erik Nord, head of the Greater Gothenburg police area.

Danman arrived at the murder scene in the Biskopsgården ghetto alone on his electric moped. Shortly before, a group of young immigrant gang members had fled the scene after a masked and armed man approached them.

As Danman met the perpetrator, he is said to have fired several shots at the policeman, who then died of his injuries. Nord told Svenska Dagbladet however that it was probable that the target for the shooting was not the 33-year-old police officer. “In the initial stage, we are looking for several alternatives, but we find no other indicators. Other than that it is a shooting where the policeman has come in the firing line, so to speak.”

An immigrant is implicated in the murder

The perpetrator who shot dead police officer  in Gothenburg this week is described as a “dark-skinned teenager” wearing a Corona mask, according to information from Fria Tider.

The investigating officers confirmed that this was a “young man in his teens with black clothes, dark skin and a mask over his mouth”. The man is also said to have worn a garment of the luxury brand Gucci – possibly a bag – and gray workwear gloves.

An insider police source described the officer’s murder in the Gothenburg ghetto as “an execution”, contradicting Nord’s version of events. “What I can say is that they aimed straight at this policeman. It was like an execution,” the police source said.

According to the source, the policeman was certainly not shot by mistake, accidentally hit nor killed by a dangerous ricochet. 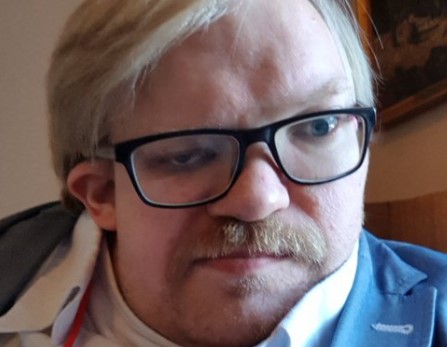 Mattias Irving, political secretary of the Social Democrats’ controversial union Faith and Solidarity. Among other things, he has been called a “front” for the Muslim Brotherhood in Sweden, and “deeply ingrained with Islamists”. Irving has said “it was time for more people to take the courage to call out the small clique of loud and influential anti-Muslim voices in Sweden” because they were “a danger to democracy”.

Mattias Irving, political secretary of the Social Democrats’ controversial union Faith and Solidarity, took the opportunity to point out that people in other professions are dying as well, but on social media Irving was summarily accused of trying to relativize the murder.

“In the last ten years, about 450 people have died at work in Sweden. Wish we took everyone’s deaths equally seriously. No one has more than one life to give. Every loss is a tragedy that could have been prevented.”

This is what Mattias Irving wrote on Twitter after the execution of Danman. His non-sensical comment sparked a heated discussion on the social media platform and has received hundreds of comments. “Not even half a day after a disgusting murder of a police officer and now it must be relativized,” one used noted.

“Faith and Solidarity ‘excels’ again … that was probably the most stupid and insensitive comment I’ve read on Twitter. But it may reflect the mother party’s view of victims of crime vs. perpetrators,” another opined.

Mattias Irving defended his comment, however. “Anyone who wants to interpret this as relativism shows most how little they value certain lives next to others. I think that all five hundred who have died in the last decade deserve to be mourned. That is my Christian opinion,” he responded in a follow-up post.

The Social Democrats for Faith and Solidarity (STS), formerly known as the Brotherhood Movement and united Christians, have in recent years been particularly noted for their association with Islamists.

The murdered policeman’s father Per Danman received a text message from Swedish Prime Minister Stefan Löfven after his son’s death. The father harshly criticized Swedish authorities. “The whole Swedish society is in chaos and now it was my boy who happened to end up in the chaos. The kindest nicest man. He was going to be a father.”

Per Danman told Nya Riks: “I received a text message from the Prime Minister and some party leaders who apologized for the grief but they are sitting on Lidingö [a wealthy island in the inner Stockholm archipelago] in their palaces. We have a boy who has passed away. That is the difference.” Danman’s pregnant wife is also a police officer.

When Stefan Löfven commented on the murder on Thursday, he claimed that the government had worked “very purposefully” to “increase security” in Sweden. Löfven was asked by a journalist what the government was doing to aid the police in their work. The Prime Minister replied: “Since we took office in the autumn of 2014, we have worked very purposefully to increase security and with it also ensure that the police tools, the number of police officers and their resources are constantly strengthened.”

On Twitter, Swedish Democrat leader Jimmy Åkesson denounced the growing insecurity: “There is much to be said about the political betrayal of Sweden’s security in general and the disrespectful view of the Swedish police in particular. Right now, however, my thoughts go to the victim’s family and other relatives, but also to all police colleagues in external service.”