Two black ESKOM employees and their accomplices contracted by the South African power utility, were arrested last week and charged with fraud, theft and corruption in connection with hundreds of millions worth of goods that were stolen. The goods and services paid for by the power utility were not delivered nor rendered at the country's Tutuka Power Station.

The whole country is currently suffering from debilitating black-outs because of rampant theft perpetrated by these employees and private suppliers. The black-outs are called “load shedding” so as not to hurt black feelings.

The arrests came after months of investigations. The two black men oversaw the theft of approximately R100 million worth of fuel oil per month from the power station. This massive criminal endeavour was made possible after the utility started making use of private suppliers.

“The suspects, Jessie Phindile Kubeka, who is 51 percent shareholder in a supplier company; Eskom employees Sarah Nomsa Sibiya (Senior Technician Operating) and Bhekizizwe Solomon Twala (Senior Storeperson), are all facing the same charges,” said spokesperson Sikonathi Mantshantsha. They were both released on bail for risible amounts of R5 000 each after quite literally plunging the country into darkness. The trial has been set for 21 February 2022.

While crippling the power supply which now affects the livelihood of millions of people may be viewed as a benign transgression judging by the low bail set, racial slurs against blacks, on the other hand, are not tolerated.

Kessie Nair, an Indian man, who had called President Cyril Ramaphosa a “kaffir”, was summarily denied bail. Nair was arrested in 2018 after he posted a video on the president’s incompetence. He faces six counts of crimen injuria and two counts of incitement and was forcibly interned at the Fort Napier Psychiatric Hospital in Pietermaritzburg for a 28-day mental evaluation after he blamed the president for not promoting Nelson Mandela’s multiracial society.

According to ESKOM, four other black suspects were involved in the elaborate scheme and have been identified. They will be arrested this week. “Eskom, and Tutuka power station in particular, continues to be the scene of the most despicable of crimes perpetrated by some of the very people tasked with the stewardship of this public institution and by unscrupulous suppliers,” said ESKOM CEO Andre de Ruyter.

The utility chief blamed the perpetrators for profiting from the problems that are costing the whole country. “Whilst these investigations take a long time to come to fruition, the wins whereby arrests are made and criminals are brought to answer for their unlawful conduct, goes a long way towards making a positive contribution to the rebuilding of the organisation.”

South African power utility ESKOM said in a statement that it was aware that many areas have been without power for long periods. In one instance it blamed “vandalism” at at least three substations in one area as the reason for this.

In its statement to the press regarding Cape Town in particular, the utility admitted that theft had also been the cause for the outages.

Eskom’s statement reads: “The extent of the damage has caused severe delays in the repairs to the power supply to customers. Eskom has observed an increase in theft and vandalism of equipment in the Cape Metropole in recent months. It is because of these criminal activities that this suburb has been without power for a long time and residents are frustrated.”

The power giant says it relied on communities to notify it immediately of any crimes against its infrastructure.

Breitbart meanwhile claimed that the current problems were due to a lack of “privatization” of the utility.  But twenty years ago, when ESKOM was still a state-owned utility, South Africans enjoyed the cheapest and best energy infrastructure in the world. That was before trade unions demanded racial quotas and ANC cronies started doing business with ESKOM, winning lucrative tenders. 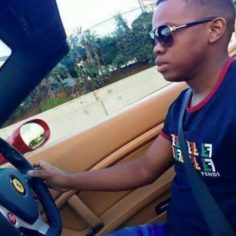 Black South Africans living it up: ‘Forex trader’ Sandile Shezi became a millionaire at the age of 23 but was arrested for fraud in October. SA’s ‘youngest millionaire’ had no qualms about showing off his ill-begotten gains – a Mercedes-Benz G-Wagon, a Ferrari and a Maserati. There are hundreds of these black ‘tenderpreneurs’ on the prowl in Johannesburg. Facebook

These black “business people” are known as “tenderpreneurs” in South Africa.

ESKOM on Sunday warned that rationing would continue. “It was anticipated that an additional seven units would have returned to service by Monday, and this has not materialised. While Eskom regrets the escalation in load shedding, it is necessary to ration the remaining emergency generation reserves, which have been utilised extensively this morning as we are not getting the reduction in demand as expected from the implementation of Stage 2 load shedding.”

South African prosecutors seized luxury property and vehicles worth some 1,4 billion South African rand ($97 million) in early May from black contractors and former officials at ESKOM, as they ramped up criminal proceedings over alleged corruption in construction orders at another coal-powered station – the Kusile Power Station.

“I’m sitting on information that indicates there is another R800 billion of corruption that still needs to be brought to the surface and investigated,” Ted Blom, an energy expert told the Classic Business 1027 podcast at the time.

Hangwani Mulaudzi, spokesperson for the Hawks (South Africa’s Directorate for Priority Crime Investigation), told the media: “This revealed that there was apparent gross manipulation of contractual agreements between contractors, ESKOM employees and third parties at Kusile power station.”

Nigerian President: More weapons for Ukraine end up in Africa

LagosSome time ago, FWM reported on arms deliveries to Ukraine, which shortly afterwards were resold on the Internet. Nigerian President Muhammadu Buhari has warned that "weapons used in the war in Ukraine are gradually leaking into the region" and called for strengthened border security.

Windhoek"The former German colony, Namibia wants to help Germany in its energy crisis". This is how an article in the online edition of a German newspaper recently began about Namibia's new "Digital Nomad" visa. The six-month visa is ideal for long-term holidaymakers. And for professionals who have their office on their laptop and can work from anywhere.