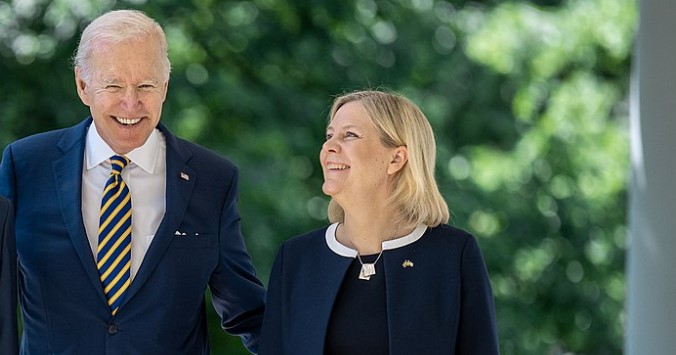 Swedish PM Andersson smiling at the most unpopular US President, Joe Biden in the White House in May 2022. Wikipedia
Stockholm

Sweden's Social Democratic Prime Minister Magdalena Andersson acknowledged her defeat on Wednesday evening and announced her resignation, after right-wing alliance with the Sweden Democrats as the strongest force has won the parliamentary elections in the Scandinavian country.

The right-wing alliance thus has 176 seats in the Reichstag, while the other parties only receive 173 seats. The coalition negotiations will show whether they put this majority to good use. Before the election, the moderates had announced that they wanted to work with the Sweden Democrats. It remains to be seen whether they will elect their chairman, Jimmie Åkesson, as prime minister.

Immigrants voted for the the Social Democrats

Despite the small increase in votes, the Social Democrats is actually a party on thin ice, and it has been for quite some time, argued Nya Tider columnist Roger Sahlstrom. “I think this is the Social Democrats’ last big election. Magdalena Andersson has lifted the party, absolutely. But I am quite convinced that it is on the basis of immigrant votes that Social Democracy wins today. Namely, it is no longer primarily workers who vote for the party, but grant recipients in the suburbs. Those who became slaves during the failed social projects of the Social Democrats. And now that Nyans [immigrant party. ed.] exists, many of these immigrant votes will go there.”

Sahlstrom said it was a huge victory for the Sweden Democrats. “We are now stepping into a completely new sphere of political power, where SD will own a lot and they will dictate the terms of the blue-yellow side. That after years of struggle they now step out as the second largest party, they deserve it. They have been clubbed hard for their faith in Sweden.”

Sweden currently has the lowest economic growth in the EU, rampant gang crime and growing segregation that is tearing the country apart. 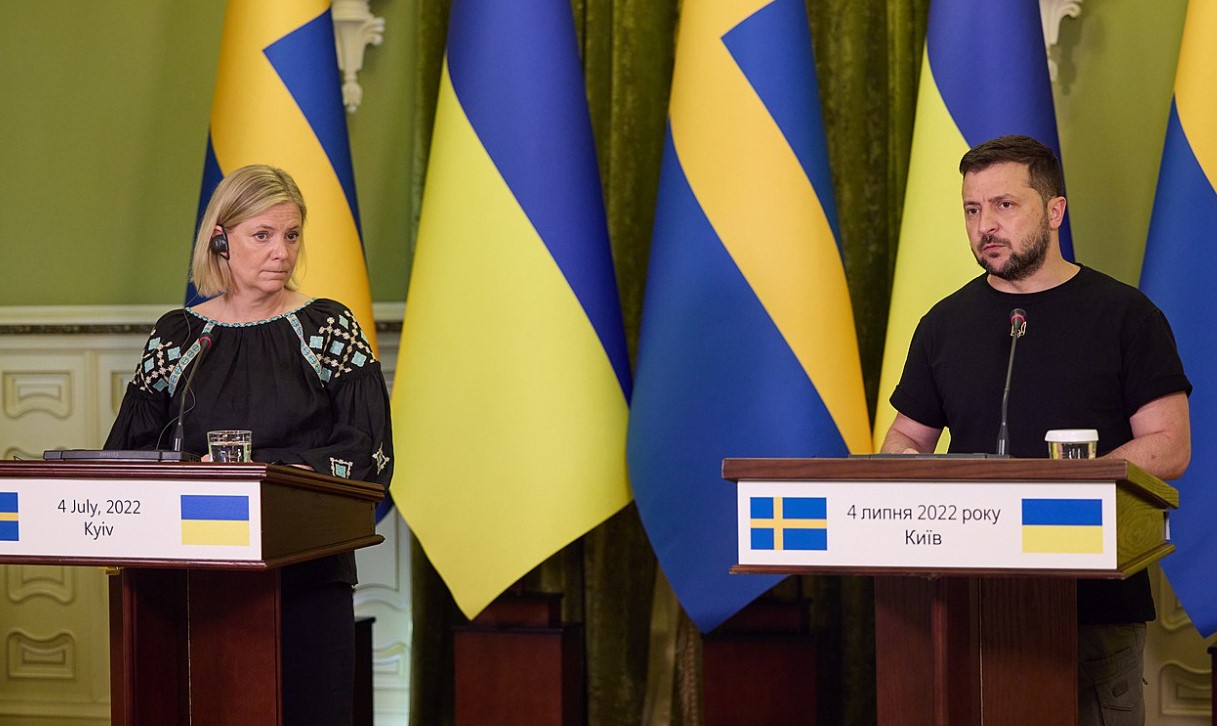 Outgoing Swedish PM Andersson met with the President of Ukraine Zelensky in Kiev on 4 July 2022 to promise aid as Sweden faces a recession. Wikipedia

A major conservative victory with the Moderates and Sweden Democrats as the largest parties, and where support for the Social Democrats and the Green Party, among others, collapsed, was also the result of this year’s school elections and the state television’s polling station survey among first-time voters where Swedish youth get to have their say.

It is the Authority for Youth and Civil Society Affairs that reported preliminary figures for how Swedish young people have voted, and a political scientist at Södertörn University noted that “Generation Greta” may have been nothing more than a myth.

In connection with Greta Thunberg, starting her school strikes for the climate in 2018, this was hyped above all among some big city youth, not infrequently from well-to-do middle-class homes. Climate-Greta was widely promoted by the system media and regarded by them as a “world celebrity” while professionals began to talk about the phenomenon “Generation Greta”, that is to say that the young people were particularly interested in environmental and climate issues and politically leaned more towards red-green politics.

Conservative upheaval in the school election and among first-time voters

In connection with the ordinary Riksdag election, as is often customary, school elections were held, where Swedish school students also get to vote in a mock election. The purpose is simply to gauge the political mood among young people. If, in recent years, professionals in the system media have liked to talk about the left-wing “Generation Greta”, this year’s school elections show a completely different picture, however, according to preliminary figures from the Agency for Youth and Civil Society Affairs (MUCF) and the state television’s polling station survey, which measured how first-time voters have voted .

The figures show, contrary to what many might have wished, that the conservative wave is especially clear among Swedish youth, and in terms of results the Moderates are the largest with 27 percent, followed by Sweden Democrats which got  20,1 percent. Only in third place comes the Social Democrats with only 16,2 percent.

On the right side, the Christian Democrats (KD) are also increasing and among Swedish school students they get 9,29 percent compared to 3,9 percent which was the result in 2018.

Collapse of the Swedish Greens (MP)

The Green Party fared even worse among younger Swedes. From being able to show a result of 10,2 percent among school students in 2018, MP plummeted to 4,7 percent, which is below the preliminary result in the parliamentary election where the party must obtain 5,1 percent.

On the left-dominated side, support for the Center Party also dropped off dramatically, as did the Left Party and Feminist Initiative, although not as strongly as C and MP.

The establishment surprised by the result

The fact that Swedish school students and first-time voters lean so far to the right and are not at all overly interested in the climate and thus cannot be called “Generation Greta” has obviously surprised the establishment. One of those who expressed incomprehension is political scientist Marja Lemne, who works at Södertörn University, which is described by many as a hotbed for left-wing academics.

“I must say that it is somewhat surprising. Now, not all schools have school choice, so there may be some biases. But of course it is surprising,” Lemne told the left-wing newspaper Aftonbladet. “Maybe it’s just imagination that the younger people are so interested in environmental issues.”