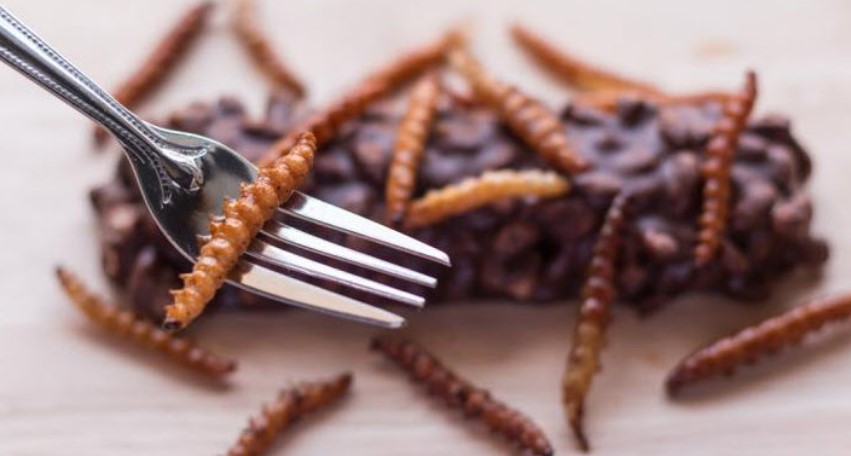 The Netherlands has become a testing ground for the globalist Great Reset being pursued by the World Economic Forum. In the process, people's diets are being switched to insects. After most farmers in the Netherlands were officially ruined by suspect "nitrate laws", insects are currently being introduced in schools.

NETHERLANDS – 100 schools have insects and mealworms on the menu, indoctrinating your children to the New Normal.

The WEF agenda will not be stopped, until you all stand and say no. The last 2 years must have taught you that.

A project was launched to manipulate public opinion and many people are playing along. In a Twitter video the project in which insects and mealworms are served in 100 schools showed how children were being introduced to the “new normal” of the Great Reset.

It is not known whether their parents agreed to these questionable nutritional experiments. It’s a tried and tested method to introduce behavioural change through uninhibited children.

The Dutch news site rtvoost reported that children were being encouraged to eat mealworms on the menu of canteens of a hundred primary schools in Overijssel.

After initial hesitation, the pupils of the Octopus primary school in Zwolle carefully put the worms in their mouths. And as they try the unfamiliar food, only a few find it appetizing. The “teaching pack” on nutrition however is presented as “healthy and sustainable eating”.

At Octopus school, mealworms were not the only item on the menu. The Grade 7 pupils could also try dishes with lupine worms and other insects.

The province distributed the insect food

The Province of Overijssel made one hundred of these teaching packs available to one hundred primary schools throughout the region, known as the Taste Mission Adventurous Proteins, as part of the Dutch Food Week campaign by farmers and gardeners. The teaching pack was developed in collaboration with Wageningen University & Research (WUR).

The (dis)information campaign has been overwhelming. Member of Parliament Gert Harm ten Bolscher from the Reformed Political Party (SGP) saw the Octopus experiment as an opportunity to exit the provincial government building and try the new menu for himself.

With manipulative formulations, insects are presented as wholesome, desirable, and even tasty food. In doing so, they openly admit that by manipulating children, the new “food” could gain approval. Not a word is mentioned about toxins, pollutants and parasites associated with breeding insects.

The “taste week” – proposed as a stand-alone experiment – may soon become reality. Some agricultural sections have already been converted to insect production and the choice is presented as a solution to the “world’s food problem“.

Australian schools have also been feeding children insect chips even though this kind of nutrition is by no means harmless.

An article from the Australian Daily Telegraph hidden behind the paywall  reported that at least 1 000 Australian schools were already selling chips made from insects for the sake of the “climate”. Even more alarming, however, is an accompanying video, which showed an adult trying to convince very young children that these chips were particularly healthy for them.

In Australia, over 1000 schools are supplying cafeterias with cricket chips in an attempt to normalize eating insects.

Under the guise that it’s “healthy” and “eco-friendly”

A parasitological evaluation of so-called “edible” insects has highlighted their role in the transmission of parasitic diseases to humans as well as animals.

Crickets contain more protein than beef, without any of the environmental damage pic.twitter.com/dGxEgcP6bx

Entomo Farms in Canada currently produces 50 million crickets per week, which it mills into around 4000 kilograms of “protein”. The owners plan to triple production within a year. Some of the “cricket flour” goes into pet foods, is added to foods made for human consumption and used intact as seasoned snacks.

ActuallyFoods, maker of chips and other snack foods, has been writing “sustainable” on the packages for some time already. The word can also be found in the SDG 2030 program of the United Nations, which is working hand in hand with the World Economic Forum on a new world order.

In the small print you will then find “Organic Cricket Flour” listed – which means “derived from crickets”. Other companies are camouflaging the new ingredient with the term “achetas domesticus” – which is the scientific name for domestic crickets.

Sustainable does not mean healthy, although these terms are constantly and intentionally confused as is seen with a project proposing to recycle wind turbine blades into gummy bears at the end of their service.

Researchers at Michigan State University have made a composite resin for the blades by combining glass fibres with a plant-derived polymer and a synthetic one. Once broken down, they could become chewy sweets.

Microsoft founder Bill Gates, the largest private owner of farmland in the United States, in 2019 invested $100 000 into an insect-farming start-up and is known as an advocate of “synthetic meat”.