In 2022, the Flemish government will pay €175 763.87 in membership fees to the World Economic Forum (WEF) and 27 000 Swiss francs (about €27 300) as participation fees to the annual meeting of the WEF in Davos. This is according to Flemish minister-president Jan Jambon's response to a parliamentary question by Flemish MP Sam van Rooy.

German economist Klaus Schwab’s World Economic Forum (WEF) has come under increasing scrutiny in recent years. The WEF claims to be a forum for exchanging ideas and networking, but at the very least the perception has arisen that a lot of government decisions are linked to the ideological goals of the WEF and stem from agreements made within the WEF.

All in all, this international lobbying organisation openly pursues a globalist future agenda involving numerous governments. This agenda seems to have recently crystallised into the so-called The Great Reset, whose goal is “a more secure, equal and stable world” by “acting jointly and rapidly to renew all aspects of our societies and economies, from education to social contracts and working conditions,” according to Klaus Schwab of the WEF. 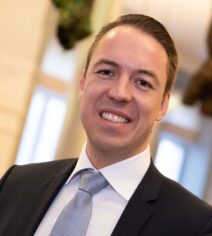 Vlaams Belang MP Sam van Rooy. He graduated with a degree in engineering from the University of Antwerp and was also a professional cyclist from 2001 to 2006 and raced with the Flemish youth team. He has succeeded Filip Dewinter as the Vlaams Belang group leader in the Antwerp city council. In 2019 he was elected to the Flemish Parliament. Wikipedia

As citizens in a democratic constitutional state are entitled to transparency on the policies pursued, van Rooy asked Flemish minister-president Jambon questions about the Flemish government’s ties and cooperation with the WEF.

In his reply, Jambon stated that the Flemish government “has no structural contacts with the WEF outside the participation in the WEF meeting in Davos”, but that there are “more regular contacts at the level of the Flemish government”. According to the prime minister, these contacts also aim to follow up on the various activities and projects that take place annually, including outside the Davos meeting.

About the “associate partnership”, Jambon stated the following: “The associate partnership offers the advantage that Flanders can participate in more activities throughout the year and, in addition, projects are being worked on within a thematic platform ‘Shaping the Future of Trade and Investment’. Those activities and projects provide additional visibility and an opportunity to learn and contribute policy-wise.” The entanglement of the Flemish government with the WEF is thus increasing.

The prime minister maintained that the WEF would have added value for Flanders because that organisation would allow him to speak at short notice with decision-makers from international companies that are important for Flanders. “The WEF provides the framework that facilitates these talks,” Jambon said, further calling WEF membership “a policy instrument of the Flemish Government” as well “to realise objectives from the Coalition Agreement”. Jambon also announced his intention to further strengthen cooperation with the WEF in the coming period.

According to Jambon, the “mission of the World Economic Forum is to improve the state of the world”, but that mission appears to be politically correct and woke, said the party in a statement. The WEF has an ideological agenda of inclusion, diversity, open borders and climate and CO2 hysteria. While Jambon has claimed that “the WEF is not asking us to pursue a specific agenda”, he admitted that his “participation in the Davos meeting may result in policy initiatives”.

It therefore seems very much as if the Flemish government is following the WEF’s globalist objective as much as possible in exchange for access to the WEF network of multinationals, banks, journalists and NGOs.

Van Rooy said that Jambon’s answers were conspicuously vague and this had raised additional questions. He therefore called on the Flemish government to cancel the Flemish paying WEF membership: “Exchanging ideas and attracting investments are of course laudable ambitions in themselves, but this should not be done in the context and under the auspices of the WEF, a lobbying group that pursues a globalist agenda and thus can by no means be considered a neutral forum for this,” van Rooy said.