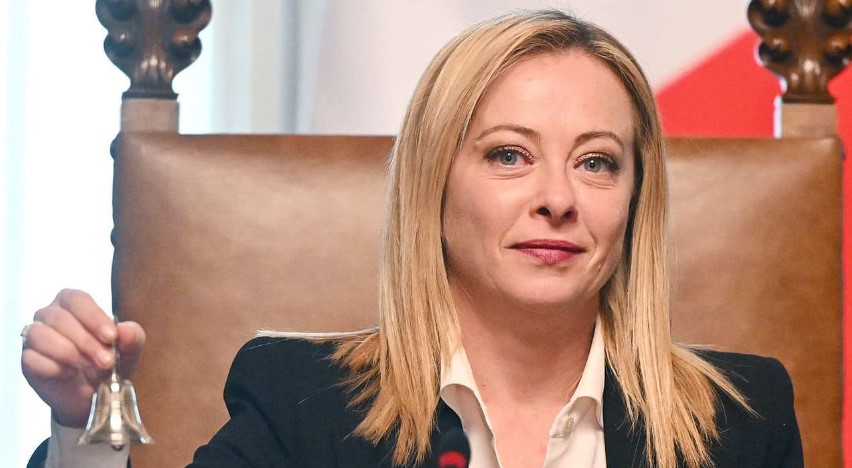 In her first speech as head of government in front of parliament, the new Italian Prime Minister Giorgia Meloni announced a radical change in her country's asylum policy.

Meloni also made a commitment to Europe: “Italy is fully part of Europe and the western world,” said the leader of the Fratelli d’Italia (FDI) party.

Regarding the refugee situation in the Mediterranean, Meloni said that she wanted her government to prevent the arrival of boat migrants. “This government wants to go down a path that has hardly been explored until now: stopping illegal departures and finally breaking up the illegal human trafficking in the Mediterranean,” she said.

Her statement was not correct however. During his tenure as Italy’s interior minister, Matteo Salvini already tried not to let the migrant boats land but failed, among other things, due to various court decisions.

“If you don’t want me to talk about ship blockades, I’ll say it like that,” Meloni continued. She went on to say that her government, in coordination with the authorities of the North African countries, wants to set up centers in the “hotspot areas” where international organizations will check whether people have a right to asylum. “We do not want to discuss the right to asylum for those who are fleeing executions,” Meloni said in her speech, which lasted more than an hour.

The prime minister stressed in her speech that the only aim was to prevent smugglers from deciding who should be allowed to come to Italy.

The so-called NGO sea rescuers rightly understood Meloni’s speech as a declaration of war. These organizations are already looking for boats off the African coast, regularly taking hundreds of migrants on board and then taking them to Italy. Among them is the Humanity 1 of the Berlin organization SOS Humanity, which sails under the German flag. On Tuesday it collected another 180 migrants near the coast of Libya and announced that it would bring these people to Italy – not Libya.

Soon, when the ship calls at an Italian port, there could be a showdown. Because Meloni has already taken action. She had her new Minister of the Interior, Matteo Piantedosi, instruct the police and port authorities to inform the “flag states”, including Germany, that the ships were not acting in accordance with European and Italian border security and control standards.

Rather, these boats should be regarded as instruments of illegal migration.

Self-appointed left-wing language regulators are outraged for yet another reason: The new Italian head of government also made it clear right at the beginning of her term in office that in future she would be addressed as “il presidente del consiglio” (the prime minister), insisting on the masculine form of her title.

Her EU Commission chief von der Leyen had congratulated her on being the “first woman” to hold the office of Italian head of government.

Leftists of all shades are fuming at the news. Laura Boldrini, MP for the Democratic Party, wrote on social media: “Italy’s first head of government wants to be given a male title. Is the affirmation of the feminine of the head of the Fratelli d’Italia (Brothers of Italy) asking too much?”

Criticism also came from the union of Italian Rai journalists Usigrai. “While Italy is struggling to adapt to European norms for the use of the feminine in public offices and professions, we are witnessing a dangerous step backwards,” the union wrote in a letter. It demanded that all journalists pay attention to gender-specific language in reporting on Meloni. No colleague can be “forced to use the masculine noun in the case of Meloni, on the contrary, RAI journalists are obliged to use the feminine noun in their names,” the union emphasized.

Meloni’s cabinet also has fewer women ministers than that of her predecessor, Mario Draghi. Only six women were appointed to the new cabinet. In Mario Draghi’s previous government, there were eight women among 23 members.

It is no coincidence that in the Chamber of Deputies, to assist from the tribune reserved for guests, there was the interim charge d’affaires of the American embassy, ​​Shawn Crowley. Meloni therefore chose her words carefully, especially on all the crucial passages concerning foreign policy.

The parliamentary group of the League notably did not applaud the passage on the “invasion” by Russia of Ukraine.

Meloni is planning a trip to Brussels as early as next week, to meet the presidents of the EU Commission and Council, Ursula von der Leyen and Charles Michel. Her schedule will also include a face to face meeting with NATO secretary general, Jens Stoltenberg.

The relationship between the two appears to be solid. So much so that yesterday Stoltenberg expressed words of appreciation for Meloni’s programmatic statements.

But there is also a trip planned to Kiev on the table, an unequivocal sign of support for the cause of Ukraine. Not surprisingly, interviewed by Corriere della Sera, Vladimir Zelensky had invited the Italian premier to Kiev. According to Italian sources, it is a trip that Meloni would like to put on the agenda before the G20 scheduled in Bali on 15 and 16 November.