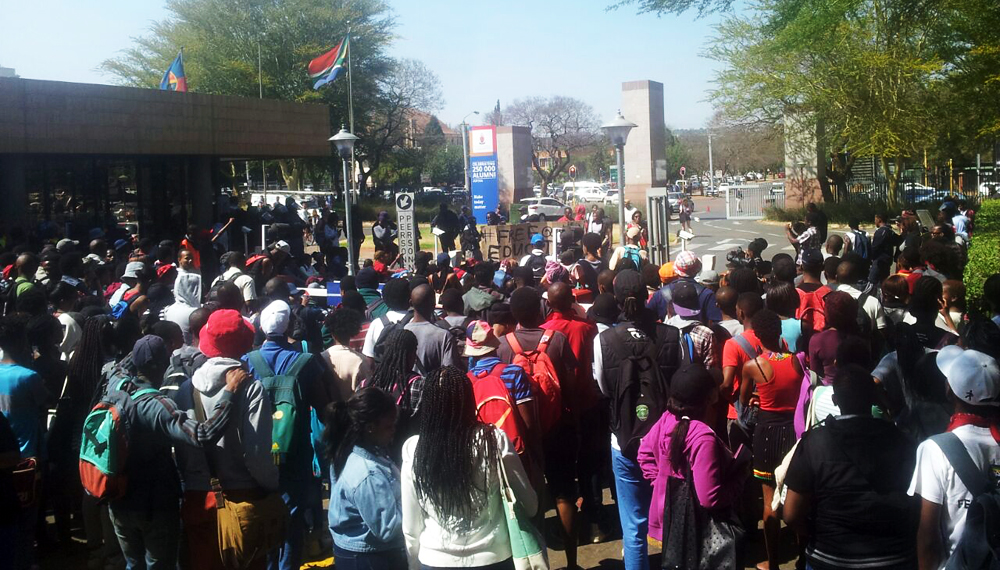 Black students blocking the main gate of the University of Pretoria.
OPINION

There are distinct similarities between irate black students in South Africa demanding "free, decolonised education" and the American #BlackLivesMatter movement which blames police officers for the violence and crime in the black community. Is Cultural Marxism and its "long march through the institutions" responsible for the increasing chaos in those institutions?

At a university in Port Elizabeth, South Africa, black students have threatened to take zebras hostage and start killing them one by one if their demands are not met. The zebras are part of a conservation project run by the Nelson Mandela Metropolitan University (previously University of Port Elizabeth) and knowing how much white South Africans generally care about wild animals, it was a shocking, but effective tactic.

There are mainly two countries where blacks have embarked on a “long march through the institutions”, fulfilling the Cultural-Marxist dream of Rudi Dutschke which he apparently formulated in a letter in the early 1970s to the most famous cultural Marxist of them all, Herbert Marcuse. Those states are the USA and South Africa. Ever since the 1950s, both have experienced seemingly never-ending racial upheavals and riots.

Most recently, there have been the Black Lives Matter movement that has accused American policemen of racism and of killing innocent young black men. However, part of the thinking behind Black Lives Matter is a new version of 1960s and 1970s cultural Marxism, called “critical race theory”. Of course, Marcuse, Horkheimer, Adorno, Habermas and others (the so-called “Frankfurt School”) also referred to their version of Marxism which de-emphasised the role of the working class in favour of students, blacks and women as “critical theory”. So critical race theory represents but a further refinement of the original critical theory of the Frankfurt School.

South Africa’s universities find themselves in a crisis similar to the one that plagued European and American universities in the 1960s, during the heyday of Cultural Marxism and even anarchism. Who still remembers Danny the Red, alias Daniel Cohn-Bendit, the anarchist leader of the French students who rioted during May 1968, overturning cars and throwing stones at the police? More recently, Cohn-Bendit has been a member of the European Parliament, elected on a Green ticket. So the Maoists and anarchists of yesteryear have turned into today’s ecologists but also advocates of free immigration to Europe, in his particular case.

Over the past few weeks, mainly black students have paralysed South African universities, agitating for “free, decolonised education”. As reported elsewhere on Free West Media, they have thrown faeces on statues and at a conference attended by the Swedish ambassador, burnt lecture halls and cars, and chased other – mainly white – students out of libraries and lecture halls with death threats.

Most South African universities remain closed, with fears now surfacing that the entire academic year could be declared lost, Students may have to repeat their courses next year and pay fees once more. It would be as if all students had failed the year, through no fault of their own; instead, cowardly university principals and administrators have failed to stop the militant black students with their violence, intimidation and irrational demands for removing Western or European content from the syllabus. After all, how would one remove European mathematics from engineering studies or European science from medical studies?

Even the former leader of the left-liberal Democratic Alliance in South Africa, Helen Zille, has recently come out against critical race theory in her autobiography by stating that “critical race theory proceeds from the presupposition that ‘whiteness’ is a profound socal problem. The ‘pathology’ of whiteness is intimately related to the ‘violence of whiteness’ which is the driving force of the #BlackLivesMatter movement”.

According to critical race theory therefore, being European or white represents a “disease”. The corollary of this extremist idea is that whites are not allowed to voice their opinions and should impose a kind of self-censorship on themselves. Like the accused in Franz Kafka’s absurdist novel, The Trial, they should simply accept that they are guilty of a crime for which there is no evidence but in relation to which one cannot prove one’s innocence either.

In the USA people are starting to talk about “the Ferguson effect” whereby police officers are reluctant to use force, even to protect property or their own lives. The police would rather suffer punishment at the hands of black criminals or rioters than face the wrath of the mainstream media which would brand them as racist evildoers.

The police chief of Chicago, Eddie Johnson, recently said about one of his female officers who failed to defend herself against a black male attacker, despite being armed with her service pistol:

“She looked at me and said she thought she was going to die. And she knew that she should shoot this guy. But she chose not to because she didn’t want her family or the department to have to go through the scrutiny the next day on national news. This officer could [have] lost her life last night. We have to change the narrative of law enforcement across this country.” (Quoted by The Washington Post.)

The same invisible force, or sacrosanct principle, that prevents a Chicago police officer from drawing her gun even though a thug is beating her to a pulp, is stopping South African universities from disciplining violent mobs of politicized black students who have brought the country’s entire higher education system to a standstill.

How do we snap out of this and start acting rationally again, as Europeans managed to do for a few hundreds years after the fifteenth century? Of course, the main battle is being fought in the media and on campuses where tomorrow’s journalists are being trained today, some would say “brainwashed”.

All the more important then that we should reach out to young people who often have to bear the brunt of the madness at schools and at universities. They dare not openly question the truisms of critical race theory, but they may still think freely off campus, in the privacy of their homes, and perhaps anonymously while online.

How we could liberate the universities from the stranglehold of leftist doctrine should be the subject of intense debate.